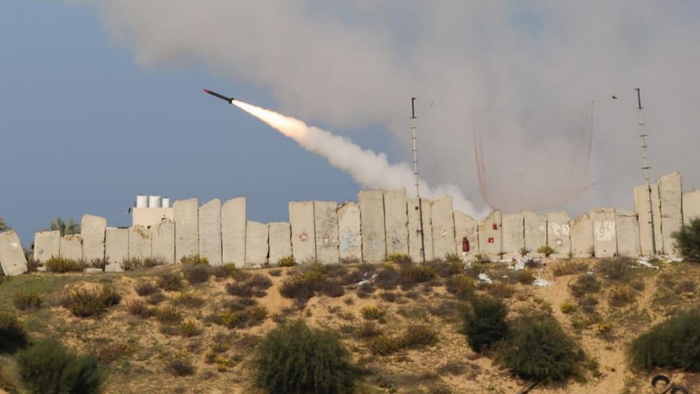 
After days ago a brief flare-up in fighting saw rockets exchanged between Gaza and the Israeli army, the Palestinian hardline Islamist group Hamas conducted what it called joint military exercises as a show of strength with competing militant factions.

Israeli media for its part said these unprecedented exercises ultimately had Iran’s hand behind them, as Reuters reported, “An array of Palestinian militant groups launched rockets into the Mediterranean Sea off the Gaza Strip on Tuesday at the start of what they called their first-ever joint exercise, which Israeli media described as a show of force organized by Iran.”

Video of rocket launches towards the sea a short while ago during the JOR drill in Gaza pic.twitter.com/uBmcUuLO11

Multiple live-fire drills were conducted throughout Tuesday, including infantry simulations, small drone flights, and provocatively the launching of rockets into the Mediterranean, which the Israeli Defense Forces (IDF) monitored closely.

The Palestinian factions further produced videos of the exercises, described as follows:

Eight rockets streaked through a cloudless sky in Gaza towards the Mediterranean after Abu Hamza, spokesman for Islamic Jihad, delivered a speech launching the drill. It will include land and coastal exercises described by the groups as a test of their preparedness for any future confrontation with Israel.

Some professional photos of the JOR press conference, rocket launches, and drone in Gaza earlier. pic.twitter.com/CHMP1y08Nt

Israel is highlighting the presence of a large portrait of slain Iranian IRGC Quds Force commander Qassem Soleimani on a main coastal road in Gaza ahead of the exercises.

Israel says this and other displays are proof enough that Tehran is also exhibiting its long reach with the drills, some of which included sophisticated weaponry.

One exercise was even staged using old non-functioning Israeli tanks left on the battlefield.

Elaborate military drills were also conducted along Gaza’s beachfront, for which Hamas had banned all fishing for the day.

“The exercise comes as part of efforts to boost the joint action and cooperation between the military wings of the Palestinian factions,” Abu Hamza, an Islamic Jihad spokesman had announced. “This exercise aims to simulate expected threats by the Israeli enemy,” the armed group said in Gaza City.

As Of 2023, Flasko (FLSK) Will Have Surpassed Both Aave (AAVE) And Dogecoin (DOGE)