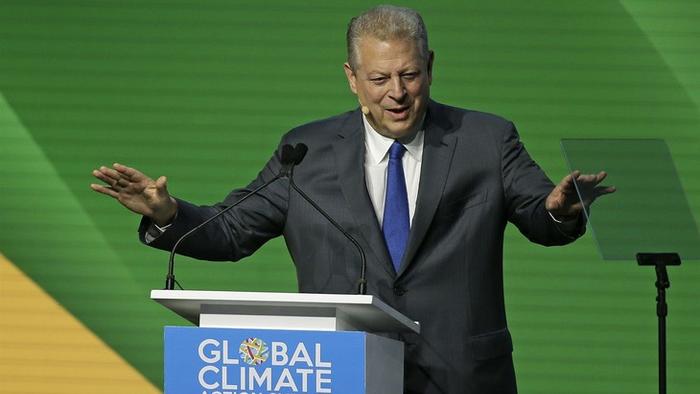 
Authored by Tyler O’Neil via PJMedia.com,

Long before Beto O’Rourke claimed the world only had 10 years left for humans to act against climate change, alarmists had spent decades predicting one doomsday scenario after another, each of which stubbornly failed to materialize. It seems climate armageddon has taken a permanent sabbatical.

Many of those doomsday predictions specifically mentioned the annus horribilus of 2020. Those predictions also failed, some rather spectacularly.

Screenshot of the Oct 2, 1987 edition of the Saskatoon Star-Phoenix

In 1987, the Star-Phoenix in Saskatoon, Saskatchewan, Canada, quoted James Hansen of NASA’s Goddard Institute for Space Studies in New York. His model predicted an average temperature increase of “between one-half and one degree Celsius by the end of the ’90s.”

“And within 15 to 20 years of this, the earth will be warmer than it has been in the past 100,000 years,” Hansen said. According to the Star-Phoenix, his model predicted that “by the year 2020 we will experience an average temperature increase of around three degrees [Celsius], with even greater extremes.”

In 1978, The Vancouver Sun cited a paper in the journal Science. University of Washington researcher Minze Stuiver predicted that the concentration of CO2 in the atmosphere will have doubled by 2020. “We learn that if present trends continue, with economics the only limit on the exploitation of fossil fuels, the CO2 concentration will have doubled by 2020. Forty to 80 years after fuel burning peaks — that will come mid-century — the CO2 concentration will be five to 10 times its present level.”

3. Emissions from India and China

In December 2009, The Springfield News-Leader reported that India and China had pledged to cut emissions by 2020. “The developing world, for the first time, is offering its own actions — not straight reductions, but clean-energy projects and other steps to slow the growth of their emissions.”

“China says it will, by 2020, reduce gases by 40 to 45 percent below ‘business as usual,’ that is, judged against 2005 figures, for energy used versus economic input. India offers a 20 to 25 percent slowdown in emissions growth.”

4. No snow on Mount Kilimanjaro

Screenshot of The Vancouver Sun reporting on a scientist’s prediction that the snows of Mount Kilimanjaro will disappear by 2020.

“‘At this rate, all of the ice will be gone between 2010 and 2020,’ said Lonnie Thompson, a geologist at Ohio State University. ‘And that is probably a conservative estimate.”

Al Gore’s 2006 documentary An Inconvenient Truth also predicted that there would be no snow on Kilimanjaro in 2020.

Yet in February 2020, The Times of London reported that the “Staying power of Kilimanjaro snow defies Al Gore’s gloomy forecast.”

“The snow has certainly got my clients talking,” Methley Swai, owner of the Just-Kilimanjaro trekking company, told The Times. “Many people have made Kilimanjaro a bucket list priority because of the Al Gore deadline but when they get here they are pleasantly surprised to find lots of snow.”

In 1986, the Environmental Protection Agency’s Jim Titus predicted that the sea level around Florida would rise two feet by 2020, The Miami Herald reported.

According to NOAA, the sea level at Virginia Key has risen by about 9 centimeters, which works out to 3.54 inches.

6. People will become unfamiliar with snow

In March 2000, David Viner, a senior research scientist at the climatic research unit of the University of East Anglia in England, predicted that winter snowfall will become “a very rare and exciting event,” The Independent reported.

Heavy snow will return occasionally, Viner predicted, but the Brits would not be prepared for it when it does. “We’re really going to get caught out. Snow will probably cause chaos in 20 years time,” he said.

About that. Snow is still very much a thing in the United Kingdom, and Scotland’s snowplows — called “gritters” — have been very much up to the task. Scotland had gotten about 10 centimeters of snow in some places by early December 2020, the Daily Record reported. “Traffic Scotland says that its current winter fleet consists of 213 vehicles that are available for ploughing and spreading salt.”

In October 2000, a Greenpeace report predicted that global warming “could cause a massive economic decline across at least 13 tiny Pacific nations in the next 20 years,” the Australian newspaper The Age reported. Global warming would devastate most of the Pacific’s coral reefs, devastating the tourism and fishing industries of tiny Pacific nations.

“Under the worst-case scenario examined, by 2020 some Melanesian nations would lose from 15 to 20 per cent of their gross domestic product, valued at about $1.9 billion [in American dollars] to $2.3 billion, while other mainly Polynesian nations are even more vulnerable and could lose between $4 billion and $5 billion due to climate change,” the report warned.

“The study shows that the most vulnerable Pacific nations are Tuvalu and Kiribati, the host of this year’s Pacific Islands Forum, followed by Cook Islands, Palau, Tonga and French Polynesia,” The Age reported.

Yet according to the government of Tuvalu’s Ministry of Finance, “Revenues collected from fisheries access increased from approximately $10 million [Australian dollars] in 2012 to $13.6 million in 2014 to the current situation in which annual revenue is more than $30 million.”

“The 2019 budget reports that Tuvalu has enjoyed an unprecedented six consecutive years of economic growth ‘on the back of increasing revenues from fishing licenses and back-to-back infrastructure projects that were-funded and administered by development partners,’” the ministry reported.

Kiribati has also enjoyed healthy GDP growth in the past five years. As with so many predictions of climate armageddon, the great demise of Pacific economies has failed to materialize.

In 2004, The Guardian reported on a Department of Defense report predicting that climate change could be America’s greatest national security threat. Among other things, the report predicted nuclear war, endemic conflict over resources, and European cities underwater by 2020.

The Pentagon report claimed that peace occurs when resources increase or when populations die off. “But such peaceful periods are short-lived because population quickly rises to once again push against carrying capacity, and warfare resumes.” In modern times, the casualties have decreased, but “all of that progressive behavior could collapse if carrying capacities everywhere were suddenly lowered drastically by abrupt climate change.”

As endemic warfare resumes, it will escalate to nuclear war, the report predicted. “In this world of warring states, nuclear arms proliferation is inevitable.”

Not only has nuclear war failed to materialize, but the world has become more peaceful in the past 30 years. Mathematicians at the University of York created an algorithm to measure battlefield deaths and discovered an “abrupt shift towards a greater level of peace in the early 1990s.”

9. The end of Arctic ice

In April 2013, the Lancaster Eagle-Gazette reported that NOAA scientists predicted “ranges for an ice-free Arctic from 2020 to after 2040.”

“It is reasonable to conclude Arctic ice loss is very likely to occur in the first rather than the second half of the 21st century, with a possibility of loss within a decade or two,” the paper claimed.

According to the National Snow and Ice Data Center (NSIDC) at the University of Colorado-Boulder, there were 3.9 million square kilometers of sea ice in the Arctic Sea at its annual minimum in September 2020.

In March 2009, U.S. Geological Survey ecologist Daniel Fagre predicted that the glaciers in Montana’s Glacier National Park would disappear by 2020.

“Fagre’s current research reveals that temperatures in Glacier National Park have risen higher than was predicted in 1992. The Montana glaciers are now expected to be gone by 2020,” The Los Angeles Times reported.

By 2010, Glacier National Park erected signs warning that its signature glaciers would be gone by 2020. This year, the park rushed to change the signs as the glaciers still existed. In truth, the U.S. Geological Survey warned the park back in 2017 that the forecast model no longer predicted a glacier-less 2020, but a park spokeswoman told CNN that the park didn’t have enough money to change the signs.

The park altered the most prominent placards in 2019, but it was still waiting for budget authorization to update signs at two other locations.

The new signs will say, “When they will completely disappear depends on how and when we act. One thing is consistent: the glaciers in the park are shrinking.”

Climate alarmists have been forecasting doom for more than 50 years, and their predictions fail again and again. In 2018, the tiny Maldives Islands were scheduled to sink beneath the waves due to climate change — yet the islands have actually grown in recent years!

The truth of the matter is, climate is an extremely complicated science that remains far less than fully understood. While it stands to reason that carbon emissions may have an impact on the global climate, there is little concrete evidence to prove it — and nearly every prediction made on this hypothesis has proven false.