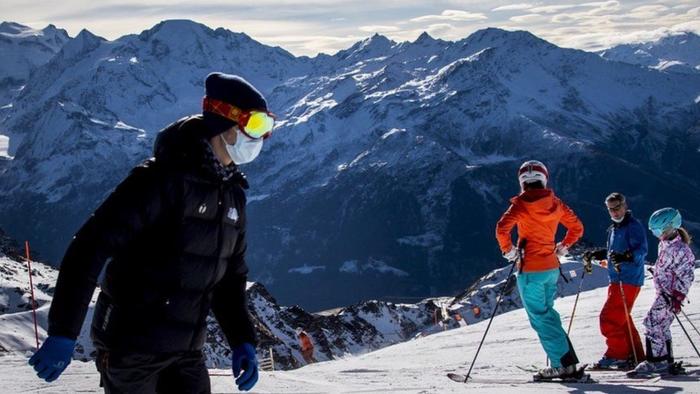 
After suddenly finding themselves on lockdown as Switzerland imposed restrictions on British travelers as part of its reaction to the new “mutant” B.1.1.7 that has emerged in the UK and elsewhere (a strain that the WHO just said isn’t any more dangerous than other strains), a group of some 200 British skiers fled a ski resort in Verbier where they had been on holiday, presumably interacting with skiers of many other nationalities.

The move has elicited outrage in Switzerland and in the Swiss press, as some locals accuse the British tourists of abusing the country’s hospitality.

However, Local officials, who depend on British tourists to bolster the local economy (which is heavily dependant on Switzerland’s famous ski resorts), were somewhat more understanding.

According to the BBC, a spokesman for Bagnes, the part of Switzerland’s Valais Canton that includes Verbier, voiced understanding for the British guests, who reportedly vanished in the middle of the night, with many hoteliers only discovering their absence the next morning when room service trays were found untouched. “We understand their anger,” Jean-Marc Sandoz told the SonntagsZeitung, a Swiss newspaper. “Suddenly families with small children were locked into 20 sq m (215 sq ft), and that’s intolerable.”

Just a couple of days before Christmas, Switzerland imposed a 10-day quarantine backdated to Dec. 14 because of the new virus strain spreading in the UK. The country also imposed restrictions on travel from South Africa due to reports of a different mutant strain that also spreads more quickly.

Switzerland’s decision to leave its ski resorts open for the season was controversial, though likely in the end driven by the important economic role that tourism plays in the tiny Alpine state.

Whether the skiers face any repercussions for defying the lockdown isn’t clear, though it seems unlikely, unless the whole thing blows up into some kind of international incident, as the country’s halt to flights to and from the UK aggravates relations with London.