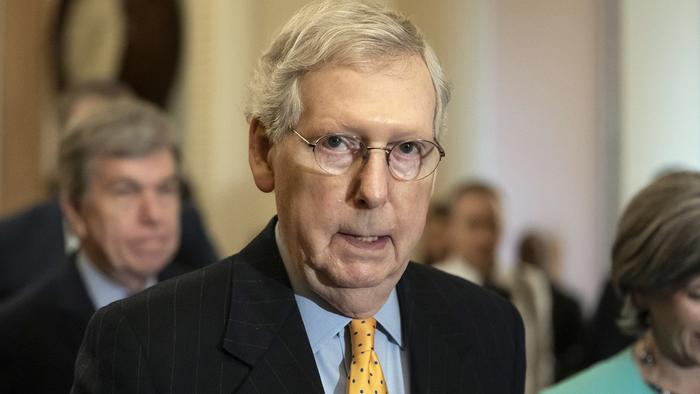 Schumer was attempting to fast-track the bill which was passed by the House on Monday – with the support of 44 House Republicans.

According to CNBC, McConnell reconvened the Senate to override President Trump’s veto of the annual National Defense Authorization act – which Sen. Bernie Sanders (I-VT) said that he would block unless the chamber holds “an up or down vote to provide the working people of our country a $2,000 direct payment.”

If the full Senate considers the stimulus check legislation, all 48 Democrats and independents who caucus with them would likely vote for it. It would then need support from 12 of the chamber’s 52 Republicans. –CNBC

“We’ve got the votes. Let’s vote today,” he said in a Tuesday tweet.

Senate Republicans are facing an optics nightmare after 44 House Republicans joined 231 Democrats on Monday to pass a bill which would increase stimulus checks from $600 to $2,000. The move, staunchly opposed by Senate GOP leaders, followed President Trump’s surprise demand last week that lawmakers include the increase in a $900 billion package which he ultimately signed – instead calling on a separate bill to boost the payments.

“The House and the President are in agreement: we must deliver $2,000 checks to American families struggling this Holiday Season,” said House Speaker Nancy Pelosi in a tweet, according to Bloomberg.

And so, with Democrats, Trump, and nearly 25% of House GOP endorsing the increased payouts, Senate Majority Leader Mitch McConnell (R-KY) is now in the uncomfortable position of denying Americans a hefty stimulus increase after the same Senate approved a $1.4 trillion appropriations package which was full of pork. Handouts include billions in foreign aid ($10 million for Pakistani ‘gender programs’), missile procurement, and a plethora of other items which don’t benefit the general American public.

What’s more, Georgia Sens. David Purdue and Kelly Loeffler, who have a runoff election in a week, now support the $2,000 checks as well according to Bloomberg. In addition, Sens. Marco Rubio and Josh Hawley also support it.

Senate Majority Leader Mitch McConnell hasn’t said whether the Senate would take up the House bill, attempt to vote on a different one that would also increase direct payments or simply ignore the issue. Senate Democratic leader Chuck Schumer said he’ll seek unanimous consent to pass the House bill on Tuesday. But the move is expected to draw an objection from a Republican, effectively shutting down the effort.

Much depends on whether the president moves on from the issue or uses it to attack Senate Republicans. –Bloomberg

As Bloomberg notes, Trump’s push for $2,000 checks may have been revenge for abandoning his bid to overturn the results of the November election based on claims of widespread fraud, irregularities, and illegal 11th hour changes to election law permitting an unprecedented number of otherwise invalid absentee ballots to count.

McConnell, meanwhile, is expected to discuss the matter when he opens the Senate for debate Tuesday afternoon, as the chamber will likely need unanimous consent to be both override Trump’s veto of a defense bill, as well as bat down the $2,000 checks — which is unlikely to happen anytime soon. If that’s the case, the matter may fall into the hands of the Biden administration, particularly if Democrats win in the Georgia runoff on January 5, which will hand the Senate to the Democrats.

In addition to boosting checks to $2,000, the House bill expands the number of people eligible to receive them, including child dependents. Currently, only children of adults under the income caps qualify.

The nonpartisan Committee for a Responsible Budget estimates that the bigger payments would raise disposable income in the first quarter to as much as 25% above pre-pandemic levels. The legislation would produce an additional 1.5% in GDP output, but not all of the growth would occur in 2021, according to Marc Goldwein, an economist who co-authored the CRFB projections.

But many Republicans had opposed stimulus payments larger than the $600 in the existing law, in part over concerns about the price tag. Bumping the payments to $2,000 would cost roughly $463.8 billion, according to estimates by the staff of the Joint Committee on Taxation. –Bloomberg