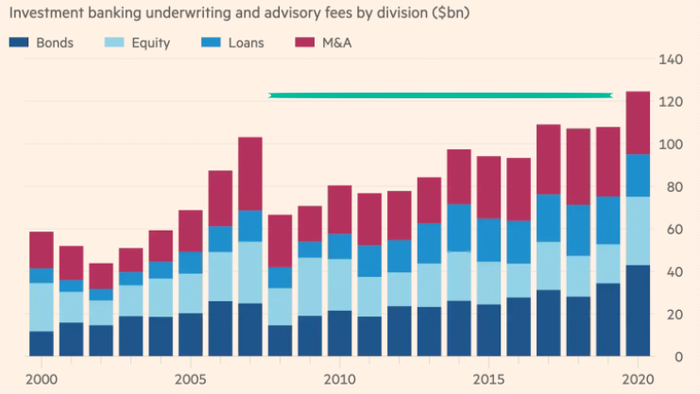 
The global capital markets business, such as equity and debt sales, has erupted during the pandemic, comes at a time when central banks have never been so dovish as asset valuations are considered “stretched.”

Since March, global monetary authorities have purchased $1.3 billion in assets every hour. They have also introduced a new policy by encouraging deeper nationalization of bond markets in the US, Europe, and Japan (also equity markets) via YCC to promote MMT. In other words, these unelected officials are blowing the biggest asset bubble the world has ever seen.

As monetary authorities provide backstops in equity, debt, and credit markets, this has certainly been a boon for investment banks worldwide who generated a record $124.5 billion in fees this year as companies desperately raised cash to survive the pandemic, according to FT.

Given that monetary authorities had the liquidity taps wide open, it was not hard for a large corporation to conduct an equity or debt deal. As a result, investment banks earned a record amount in fees for underwriting various types of deals.

Jason Goldberg, an analyst at Barclays, said this year had been a “very robust year for underwriting both debt and equity.”

“You saw a bump this year as companies looked to access capital markets to shore up their balance sheets in the face of pandemic-related uncertainty,” Goldberg said.

2020 was a record year for companies raising more than $5 trillion in debt markets, and all that money raised means lenders were able to collect handsome fees.

“While multinationals first moved to draw down credit lines in March, they quickly shifted to the bond market to lock in longer-term funding,” FT notes.

Investment banks earned about $42.9 billion underwriting debt deals, up 25% over last year.
The pace at which companies took on debt to repair broken balance sheets in 2020 is unlikely to continue next year.

It was also noted that fees underwriting initial public offerings jumped 90% to $13 billion, the highest since the end of the Dot Com bubble (2000).

“The spurt of technology listings helped lift Goldman Sachs’ equity business far past those of its rivals. The bank, which led the DoorDash, Snowflake and Unity Software IPOs, reaped roughly 10 percent of the equity underwriting fees generated this year. Large IPOs are expected to continue into 2021,” according to Michael Wong, an analyst with Morningstar.

The jump in equity and debt offering was able to offset a sizeable decline in merger and acquisition advisory fees, which dropped 10% to $29.6 billion.

JPMorgan Chase, Goldman Sachs, Bank of America, Morgan Stanley, and Citigroup collectively generated $37 billion in investment banking fees this year, some of the highest in more than a decade.

Supporting capital markets is what central banks do as their policies have created a “K-shaped” recovery, one in which the rich get richer and the middle class evaporates into the working-poor as they beg for stimulus checks and wait in food bank lines this holiday season.

The pandemic has exacerbated wealthy inequality to dangerous levels.