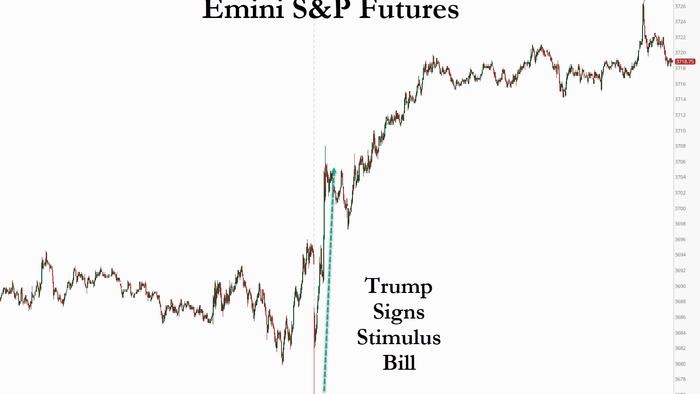 
Global stocks jumped and US equity futures spiked in light overnight trading, after President Trump unexpectedly signed the $2.3 trillion spending package on Sunday evening and as investors continued to celebrate a last-minute trade deal clinched between Britain and the European Union.

By backing down from his previous threat to block the bipartisan bill, Trump allowed millions of Americans to continue receiving unemployment benefits and averted a federal government shutdown.

“As the coronavirus pandemic has shown little sign of abating, the emergency aid was needed to avoid a sharp slowdown in the economy during the first quarter,” said Nobuhiko Kuramochi, market strategist at Mizuho Securities.  “It would have been unsettling if we hadn’t had it by the end of year,” he added.

The rollouts of COVID-19 vaccines were also bolstering hopes of more economic normalisation next year, with Europe launching a mass vaccination drive on Sunday, which however has been met with rising skepticism.

That for now has offset alarm over a new, highly infectious variant of the virus that has been raging in England and was confirmed in many other countries, including Japan, France and Canada, over the weekend.

The MSCI world index rose 0.3% boosted by strong opening gains in Europe and a positive session in Asia overnight, although trading was thinner due to the holiday season.

The euro STOXX index rose 0.9% in the first trading session after London and Brussels signed an eleventh hour deal on Thursday evening that preserves zero tariff access to each other’s markets. Germany’s DAX Index climbed to a record while British markets were closed for the Boxing Day holiday.

“We can finally move on from the Brexit drama,” said Win Thin, global head of currency strategy at Brown Brothers Harriman. “After the last-minute deal was struck last week, the UK parliament will vote on the deal Wednesday. With (opposition party) Labour promising its support, it should pass handily,” he added.

An index of Asian communication services stocks was the sole loser among industry groups. Tencent Holdings slid more than 6% to be the biggest drag on the measure. Meanwhile, utilities and finance were the other top-performing industry groups in Asia Monday. Stocks in the Philippines and Thailand bucked the region’s rising trend amid concerns over virus outbreaks and related restrictions in those countries. Philippine President Rodrigo Duterte said he’s open to reinstating tighter movement curbs if coronavirus infections spike. Markets in Australia and New Zealand remained closed for holiday.

In commodities, oil prices rose, with Brent crude futures up 0.7% at $51.67 per barrel and U.S. crude futures up 0.8%. Precious metals were flat despite gold rising 1.3% at one point to a one week high as investors welcomed Trump’s signing of the pandemic aid bill, with a weaker dollar lending further support. However, they have since given up all gains. One can’t say the same thing for cryptos however, with the entire sector continuing its relentless surge higher. Bitcoin, which hit a new record high over the weekend, was up 2.2% at $26,876, bringing the total value of the cryptocurrency in circulation to over $500 billion.