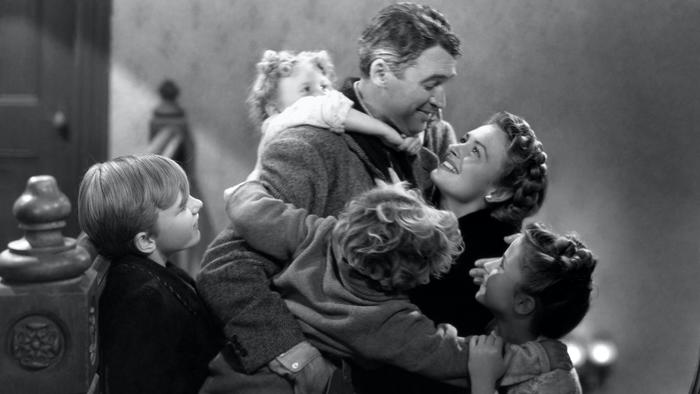 
Authored by Alexander Larman via The Critic,

This Christmas, more than any other, people will be slumped in front of their televisions, glass of something strong and dark in hand, looking in vain through the schedules to see if anything worthwhile is on. While some may be disappointed at the absence of festive ghost stories, entertainment will usually come down to a few old warhorses that viewers are trying to derive their annual distraction from, with the light and frothy likes of The Holiday and Love Actually vying for attention with Miracle on 34th Street or one of the innumerable versions of A Christmas Carol.

Yet the more discerning will look elsewhere, and then the choice comes down to one of a couple of classics set around Christmas, namely The Apartment or It’s A Wonderful Life. Billy Wilder’s wonderfully cynical, morose and wise film grows in stature and relevance every year, fully attuned to the essential murkiness of a premise revolving around an office underling lending his apartment to his superiors for their adulterous affairs. It is (hopefully) not a picture that will have the woke brigade up in arms, as it comprehensively takes the side of the individual, flawed and pathetic though he might be, against the faceless corporate structure that has trapped him.

As, in an entirely different way, does It’s A Wonderful Life. Yet while Wilder’s film has always been hailed as a classic, there has been a marked shift in attitudes towards Frank Capra’s picture. When it was released on 20 December 1946, it was not particularly popular, being a financial disappointment and regarded as inferior to earlier Capra films as Mr Smith Goes To Washington and the screwball comedy It Happened One Night.

Although one might have imagined that its release coincided with a grateful nation being delighted to be free of the shackles of a lengthy, expensive and all-consuming war, something about it failed to chime with audiences or critics. Bosley Crowther, the influential critic of The New York Times, wrote:

The weakness of this picture, from this reviewer’s point of view, is the sentimentality of it—its illusory concept of life. Mr. Capra’s nice people are charming, his small town is a quite beguiling place and his pattern for solving problems is most optimistic and facile. But somehow, they all resemble theatrical attitudes, rather than average realities.

Thanks to a cleverly orchestrated marketing campaign, it was nominated for five Oscars, including Best Picture, Best Director and Best Actor for its star James Stewart. It was beaten by the more obviously patriotic The Best Years of Our Lives, about American servicemen adjusting to civilian life after WWII, although Capra did win a Golden Globe for Best Director. And then it fell out of favour for three decades. It unexpectedly became a festive perennial in 1976, when it passed into the public domain and could be freely shown without expensive licensing fees. Subsequently, it has become one of the most popular films of the 20th century, and probably the best-known and most loved picture starring Stewart and directed by Capra. It is eulogised as a hymn to optimism, to family and Christmas. Why, then, does it begin with a depressed man about to kill himself?

It is received wisdom that It’s A Wonderful Life is a sentimental exercise in all-American wish-fulfilment. As so often, received wisdom is incorrect. It is instead a more complex and nuanced film than that. It was based on a short story by the author Philip van Doren Stern, “The Greatest Gift”, which was both inspired by A Christmas Carol and, more tenuously, by the work of Edgar Allan Poe, which Stern was an expert in. The story was published at Christmas 1944, found its way to a film studio, who paid a substantial $10,000 for the rights, and, after Cary Grant turned down the leading role, ended up being made by Capra.

In its initial, potentially Grant-starring conception, with scripts by Dalton Trumbo and the playwright Clifford Odets, the film was to revolve around a politician who had become increasingly jaded and world-weary, as he sees how compromised and unhappy he has become. After losing a vital election, he attempts to kill himself, before he is shown exactly how worthwhile and useful all of his initiatives have been by being presented with a parallel existence in which he had been a businessman rather than having followed a career in politics.

It would have been an intriguing film, no doubt with something worthwhile to say, but Cary Grant in a picture about the necessary compromises of politics does not entirely shout out “festive cheer”. So the script was rewritten by Capra and other collaborators (who loathed him, calling him “that horrid man” and “a very arrogant son of a bitch”), Stewart was cast in the central role of George Bailey, “a Good Sam who doesn’t know that he’s a Good Sam”, with Donna Reed as his wife, and it was filmed with great character actors including Thomas Mitchell as the amiable drunk Uncle Billy, Lionel Barrymore as the villainous banker Potter and Gloria Grahame as the good-time girl Violet. The all-powerful Hays Code ensured that the film stopped short of anything other than suggestion when it came to how flirtatious Violet’s activities with Bailey, and others, were.

The reason why It’s A Wonderful Life succeeds so admirably – but also why it may have surprised viewers on first release – is that, for a piece of heart-warming Christmas entertainment, it breaks several central rules. Not only does it begin with a scene of attempted suicide, but its storyline does not revolve around the expected narrative progression of an ordinary man being raised to greatness through hard work, luck and brilliance, but rather an ordinary man remaining ordinary, if decent, through self-sacrifice, bad luck and an unwillingness to push himself forward to the front of the queue.

Capra contrasts George’s mundane, often difficult existence with the glamorous and successful life of his war hero brother Harry, who George saved from drowning as a child but at the cost of the hearing in his left ear. This contrast finds its grimmest apogee halfway through the film. Harry is returning to his hometown of Bedford Falls a fêted veteran, and George, who has accidentally given Potter $8000 in cash from his bank, leading to certain ruin and arrest, has decided that he must kill himself so that his family will be spared the shame that will come from his downfall.

As iterations of the Christmas spirit go, this one is decidedly unorthodox. As a journalist acquaintance of mine wrote the other day, after watching the film for the first time, “I was expecting something warmly uplifting and what I got was ‘make peace with your shit life and your endless list of crushing disappointments, for you may have saved someone from drowning once’… the angel only appears in the last half hour anyway, the rest of it might as well be called “It’s a life of missed opportunities and regret”.

Ah yes, the angel. Where the film moves into the realms of the metaphysical is in the character of the bumbling guardian angel Clarence, who appears to George when he is on the brink of suicide, and convinces him not to kill himself by showing what would have happened had he never lived: the idyllic town of Bedford Falls is thus transformed into a sleazy, vice-ridden hell-hole called Pottersville, and George sees how his own, quiet influence has made his home town a respectable, decent place. (It would not be the modern world without at least one critic praising Pottersville as “a place of sex, women, fun … it jumps.”.)

Yet the most affecting part of It’s A Wonderful Life comes at the conclusion, in which George finds his friends rallying round him in his distress, rescuing him from his nightmare, as his now sidelined brother toasts him as “the richest man in town”. It is a moving and heart-warming tribute to solidarity in adversity, and, at a time when most people will be stuck without friends or extended family at home this Christmas, a timely reminder that affection and loyalty can surface in the most difficult of circumstances.

And the film’s central device, of a parallel life unfolding as its protagonist looks on before he realises that everything has, in fact, been for the best, has subsequently appeared in everything from Last Temptation of Christ to La La Land. I have my own, heretical view that Martin Scorsese intended Taxi Driver as a kind of twisted counterpoint to It’s A Wonderful Life, in which Travis Bickle, well and truly stuck in Pottersville, comes to see Jodie Foster’s teen prostitute as his very own equivalent of a friendly guardian angel, although the bloody and ironic resolution to Scorsese’s film is a million miles away from the good cheer of Capra’s.

We are told (or threatened) that Paul McCartney is writing a musical based on the film, although given the odd tension that has existed between bland sentiment and experimental grittiness in McCartney’s post-Beatles career it is impossible to know whether it will be genuinely fascinating or deeply embarrassing. But certainly, it is unlikely to outstrip the original, itself one of the most accomplished and misunderstood films ever made. So raise a glass to life not having been quite what you wanted, because this year, of all years, that is something that everyone can fully get behind.