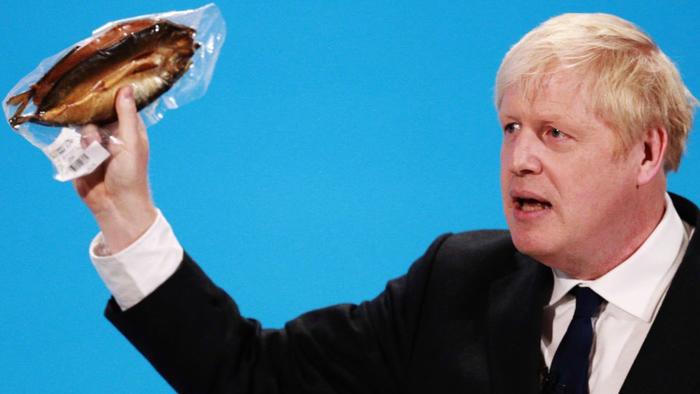 
After another sleepless night for Brexit correspondents and diplomats on both sides of the English Channel, the British media is abuzz with talk about an imminent announcement of a trade deal between the UK and Brussels after Reuters broke news about a planned announcement earlier. However, hopes for a deal in time for Christmas Eve dinner are wearing thin, as press briefings are repeatedly delayed, and talk of fishing quotas continues.

The pound climbed earlier this morning as some seemingly convincing details about the alleged ‘deal’ have been leaked to the press.

From what we can tell so far, the deal essentially preserves tariff-free trade for all goods, but does little for the ultra-important services sector (including the financial services industry, which has used COVID-19 to accelerate the shifting of jobs and resources to places like Dublin and Warsaw). Despite the visceral, mercantilist appeal that inspired some hard-core Brexiteers to push for an outright rejection of the Customs Union, it has been deemed politically unpalatable, and it seems like members of the European Research Group, a byword for the Tories “Brexiteer” faction which caused so much trouble for Theresa May, have let it go.

Instead, Boris Johnson and Ursula von der Leyen have crafted a “thin” – according to the Financial Times – trade deal that “will provide a legal platform upon which the two sides can rebuild relations more than four years after the trauma of the 2016 Brexit vote.”

The most important development over the last 48 hours – a period during which Johnson and von der Leyen have taken over talks to try and break the logjam – is, of course, related to the last of the “big three” controversies: fishing rights.

For Johnson and the British fishing industry, the good news is this: British officials say the deal is expected to see Britain’s share of the catch in its own waters increase from around half today to about 2/3rds during the transition (which will last until 2026, ten years after the original Brexit vote), after which, access will be negotiated during a process that we’re certain will be the focus of intense scrutiny in the British press, for reasons that will forever befuddle the rest of the world.

The “tit” for Brussels’ tat, is a new arbitration mechanism intended to ensure a “level playing field” – from the standpoint of similar standards on labor laws, environmental regs and other regulatory matters – for British industry, something that had been a non-negotiable demand from Brussels from the start. Importantly, the “mechanism” has a provision for sanctions in the form of tariffs if either side seriously undercuts the other’s regulations in areas such as environmental protection. Of course, the entire point of Brexit, according to many of its backers, was to get out from under Brussels’ regulatory thumb. If all goes well for the EU, this should make that much more difficult, but that remains to be seen: Johnson claims that this mechanism will provide both sides with a legal framework to diverge — Downing Street has already dubbed it “the freedom clause”,

The deal also reportedly solves the big “eleventh-hour” issue – electrical vehicle batteries – which according to reports threatened to scrap the whole thing and force the Brits to walk away in a huff just when a deal on fisheries finally appeared doable (thanks to some concessions from the European side, allegedly). Britain claims it has won concessions to make it possible for electric cars to be traded tariff-free even if a relatively high proportion of their components are from outside the EU and UK, Reuters reports.

Unfortunately, as the announcement is repeatedly delayed, No. 10 is telegraphing to reporters that officials on both sides are still working out “the details” on the fisheries agreement. These “details” involve quotas for various species of fish and shellfish. According to some reports,

According to the BBC, another call was just held between BoJo and von der Leyen a couple of hours ago during the early European morning. Now, the big question is are negotiators finally ‘for real’? Or will the ‘5-minutes-to-midnight-on-New-Year’s-Eve’ scenario really be how it plays out (if there’s a deal to be had at all).

The latest headlines, published just minutes ago, claim that talks continue with the two sides starting to doubt the whole ‘deal before dinner’ scenario. Then again, as fate would have it, a new viral strain has left Britain with borders seemingly blockaded by trucks. With some doubting the official word on this new COVID strain, is this politically sub-optimal state of affairs having an impact on British resolve?

Or is the Brexit fiasco finally a welcome distraction for all those stories about supermarket shelves running bare? Already, investors confidence in a deal is starting to dip, as cable’s recent dip might suggest.

Whatever happens, we hope people on both sides try to keep their heads, and enjoy what will undoubtedly be a memorable holiday.