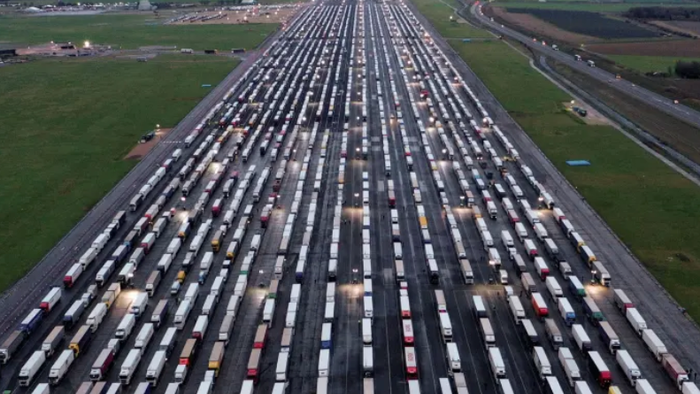 
France announced the reopening of its borders with the UK late on Tuesday, ending a two-day closure prompted by fears of a fast-spreading coronavirus mutation in England.

As a result of the border shut down, thousands of truck drivers remain stranded in the UK, while France’s new public health measures require drivers to be tested before entering the country.

France and Britain agreed on a rapid PCR (polymerase chain reaction) COVID-19 test that takes about 30 minutes, but that doesn’t necessarily mean the thousands of stranded truck drivers waiting to cross the channel will be resolved in a day’s time.

Despite the reopening of the borders, FT notes the backlog of trucks on Wednesday was in the thousands.

The situation was chaotic at the Port of Dover entrance, which was blocked throughout much of Wednesday by lorry drivers unable to board ferries because they did not have the tests demanded by the French government.

The UK government set up the main testing operation 20 miles away from Dover at Kent’s Manston airport, a disused facility where most of the stranded lorries were being held. -FT

Drivers parked their trucks at Manston International Airport this week as they waited for coronavirus testing.

While BBC News said 3,000 trucks were in holding areas, the Department for Transport said the figure could be upwards of 5,000 trucks waiting to cross the English Channel.

According to the Road Haulage Association, the estimate could be as high as 10,000.

Manston Airport, which is becoming a lorry park for Dover, is where Brexit and UKIP began. The party took control of Thanet council in 2015 – a major foothold – after the airport was shut.

The transport department told the haulage industry that it has the capacity at the moment to test 300 drivers per hour, and the backlog could be cleared up in the coming days.

Testing of the drivers is so massive that the UK government called in the military.

“This is a mammoth task and clearing the backlog will take time and patience,” said transport secretary Grant Shapps.

Even as the Channel Tunnel between the UK and France reopened early Wednesday morning, automobiles started flowing through, but it wasn’t until the afternoon when truck volumes started to increase.

“It’s only late this afternoon that volumes have picked up significantly,” Getlink, the company that operates the Channel Tunnel, said.

Getlink expects freight volume through the tunnel will rise as trains will operate through the holiday session to reduce the backlog.

The chaotic situation at the Channel Tunnel has not been limited to just the UK side.

Weeks ago, we reported backlogs and other delays formed in France as companies rushed goods into the UK before Britain leaves the European Union Customs Union on Jan. 1.

Supply chains in some of Europe’s largest economies are a complete mess at the moment, aiding in the view that a robust economic recovery is nowhere to be found.

Dogecoin Has Entered the Demand Zone; Will the DOGE Price Receive the Required Liquidity to Surge High?