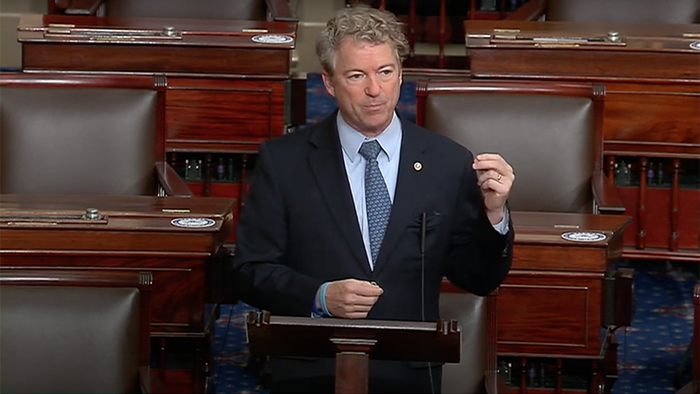 Senator Rand Paul slammed Republicans Monday for voting in favour of a huge $900 billion coronavirus relief bill, saying that they are no better than the Democrats they routinely label as ‘socialists’.

“To so-called conservatives who are quick to identify the socialism of Democrats: If you vote for this spending monstrosity, you are no better,” Paul urged in a speech on the Senate floor:

The Democrat controlled House, as well as the Senate passed the legislation, also tacking on a $1.4 trillion spending bill, prompting Paul to criticise the move as the government giving away “free money”.

“When you vote to pass out free money, you lose your soul and you abandon forever any semblance of moral or fiscal integrity,” Paul urged.

“If free money was the answer… if money really did grow on trees, why not give more free money?” Paul said.

In addition to Paul, only five other Republicans voted against the legislation:

6 Republican against voted against the relief bill:

Senator Ted Cruz tweeted that there was no time to even read the bill, ironically agreeing with extreme leftist Democrat Alexandria Ocasio-Cortez:

It’s ABSURD to have a $2.5 trillion spending bill negotiated in secret and then—hours later—demand an up-or-down vote on a bill nobody has had time to read. #CongressIsBroken https://t.co/EQp8BfRBHj

Paul also noted that it would have been impossible for anyone to have read the bill:

My guess Big Spenders in Both Parties will pass this without anybody ever really reading it.

Paul vowed to continue to ‘sound the alarm’ over excessive spending:

I will oppose this new debt, and I will continue to sound the alarm until we change our course here in Congress.

It doesn’t have to be this way. This debt crisis is a preventable crisis. It is not too late to change our course. Cut unnecessary spending, eliminate waste, stop fighting a $50 billion per year forever war in Afghanistan. Make the hard decisions now.

We can choose to let our economies open, with guidance and precautions but not obstruction. Let people rebuild their livelihoods. Reopen our schools so kids can learn and parents can go back to working and earning a living.

Until then, the dead will continue to vote and to cash government checks.