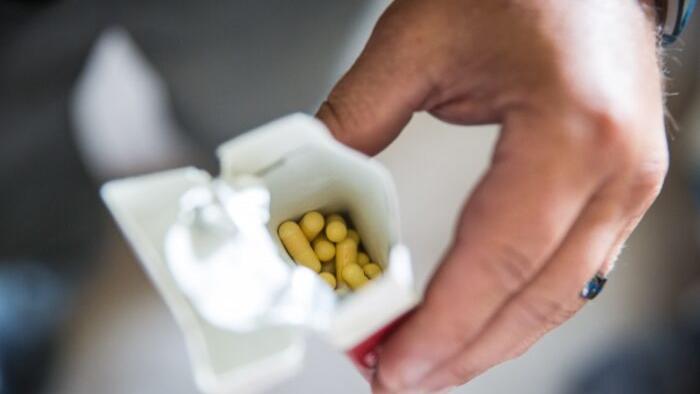 Deaths from drug overdoses are accelerating during the COVID-19 pandemic, according to the Centers for Disease Control and Prevention (CDC).

A cigarette box of pills that was found with two people in an abandoned home in Dayton, Ohio, is seen in a Aug. 3, 2017, file photograph. (Benjamin Chasteen/The Epoch Times)

Overdose deaths were already increasing in the months before the pandemic started, but the latest numbers suggest a further acceleration, the agency said this week.

Over 81,000 drug overdose deaths occurred in the United States in the 12 months ending in May, the highest number of overdose deaths ever recorded in a 12-month period, according to provisional data the CDC released.

According to the agency, that’s an 18 percent increase since the previous 12-month period.

“The disruption to daily life due to the COVID-19 pandemic has hit those with substance use disorder hard,” said CDC Director Robert Redfield in a statement.

“As we continue the fight to end this pandemic, it’s important to not lose sight of different groups being affected in other ways. We need to take care of people suffering from unintended consequences.”

Shutdowns across the United States, or the forced closure of businesses, government agencies, and in-person schooling, kicked off in March and has continued in some areas virtually unabated since. In other states and counties, authorities have taken a more measured approach.

Experts told The Epoch Times in August that the shutdowns were spurring a mental health crisis. Dr. Carla Marie Manly, a clinical psychologist who specializes in stress and anxiety, said she has noticed “a huge surge in depression, suicidality, and anxiety during the pandemic,”

“People are worried about a possible second wave of the virus, but I can guarantee we will have a second wave of mental health crisis, which is already unfolding with increased suicides, drug overdoses, and alcohol use,” added Nicole Avena, assistant professor of neuroscience at Mount Sinai School of Medicine in New York City and a visiting professor of health psychology at Princeton University.

Dr. Elinore McCance-Katz, assistant secretary for mental health and substance abuse at the Substance Abuse and Mental Health Services Administration, warned President Donald Trump and his cabinet of issues stemming from lockdowns during a Cabinet meeting in May.

A woman walks during the near-statewide lockdown past the empty patio area of The Back Bay Tavern in Newport Beach, Calif., on Dec. 9, 2020. (John Fredricks/The Epoch Times)

“We know that the longer the duration of these orders, the greater the intensity of the mental health problems experienced. We also know that these symptoms persist for years to come, even once quarantine is lifted,” she said.

“To put all of this in perspective, I believe it is important to point out that, pre-pandemic, we lose 120,000 lives a year to drug overdose and suicide. How many more lives are we willing to sacrifice in the name of containing the virus?”

Synthetic opioids, primarily the illicitly manufactured fentanyl, appear to be the primary driver in the increased number of overdose deaths. Those deaths increased by 38.4 percent during the period in question, when compared to the 12-month period ending in June 2019.

Overdose deaths where the victims took cocaine increased, by 26.5 percent. Many of the deceased using cocaine also use fentanyl or heroin, or take cocaine that’s contaminated with one or another. And overdose deaths involving psychostimulants such as methamphetamine increased by 34.8 percent.

“The increase in overdose deaths is concerning,” Deb Houry, director of CDC’s National Center for Injury Prevention and Control, said. “CDC’s Injury Center continues to help and support communities responding to the evolving overdose crisis. Our priority is to do everything we can to equip people on the ground to save lives in their communities.”