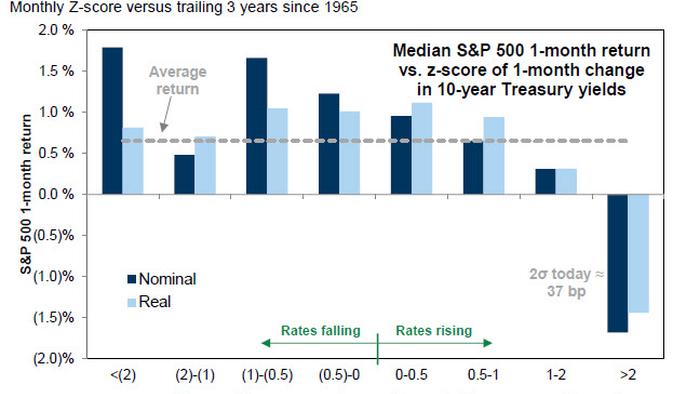 
One month ago, Goldman’s chief equity strategist, David Kostin, decided that it was time to throw caution to the wind and in a note appropriately titled “The Roaring ’20s Redux“, raised his 2020 year-end price target from 3,600 to 3,700 and also forecast that the S&P would climb by 16% to 4300 at year end 2021 and rise another 7% to reach 4600 by the end of 2022, on the premise that the broad rollout of the covid vaccine would restore normalcy to the economy, facilitating the reflation trade and propping up value stocks which would take the place of growth names as market leaders, while the dovish Fed status quo would enable further multiple expansion as rates remained lower for ever.

To be sure, even Goldman had some problems justifying a 1000 point S&P surge in 2 years when looking at already record-stretched valuations, which the bank admits are currently in the 92% percentile…

But here too the company found a “deus-ex” loophole: record low interest rates which will allow P/E multiples (and thus stock prices) to remain in the stratosphere, and the equity risk premium to compress further, which also serves as the backbone of Goldman’s entire bullish outlook:

The backdrop of low interest rates and subdued policy uncertainty that we anticipate during the next two years will be constructive for equity valuations. Our valuation framework relies on the cost of equity, which in turn depends on interest rates and the equity risk premium. The key drivers of our ERP model include breakeven inflation, policy uncertainty, consumer confidence, and change in the size of the Fed’s balance sheet.

Interest rates: We assume stable Fed policy and limited yield curve steepening. Given the Fed’s new average inflation targeting (AIT) framework and its forward guidance for the funds rate, Goldman Sachs Economics forecasts the first hike in the funds rate will not occur until 2025. We assume higher breakeven inflation will drive modest yield curve steepening as the ten-year US Treasury yield climbs from 95 bp today to 1.3% at year-end 2021 and 1.7% by the end of 2022. Diminished prospects of massive fiscal spending that might have occurred under a Democratic sweep coupled with extremely low bond yields globally will limit the rise in nominal US yields.

Equity risk premium: Improving growth expectations and falling uncertainty will compress the ERP. Our economists’ baseline forecast for fiscal stimulus and vaccine approval should drive an improvement in growth expectations, breakeven inflation, and consumer confidence, in turn pushing the ERP lower. The economic policy uncertainty index has averaged 227 during the last year, 100% above the long-term average, and has kept the ERP elevated (Exhibit 9). However, we expect a divided government will reduce uncertainty sharply by year-end 2022 (to 125, in line with the long-term average).

So, in a nutshell, Goldman’s entire thesis falls apart if yields jump as markets start pricing in rate hikes and runaway inflation.

Which brings us to the latest Weekly Kickstart note from Goldman, the year’s last, in which besides a cursory lookback at what transpired in 2020, Kostin also highlights the three biggest risks to his bullish thesis for 2020, which are as follows: i) a rise in inflation and interest rates, ii) a botched vaccine distribution, and iii) policy uncertainty stemming from the Georgia Senate run-offs and antitrust litigation.

Before we get into those in detail, a quick look at the unprecedented year for stocks that was:

The S&P 500 has returned 15% (+17% with dividends) in 2020 but has also experienced extreme volatility. 1Q witnessed the fastest bear market in its history. S&P 500 one-month realized volatility soared to its highest level during the past 70 years (matching Black Monday, October 19, 1987). Annualized realized volatility for the index sits at 35 (96th percentile since 1930), putting S&P 500 realized risk-adjusted return at 0.4, below the long-term average (41stpercentile since 1930).

Next, the Goldman strategist lays out a big picture view of why so many of his colleagues anticipated continued levitation as justified by fundamentals (instead of, say, central banks which as we noted last week, are injecting $1.3 billion in stocks every hour thus creating a “Frankenbull” market).

Across the S&P 500, bottom-up equity analysts forecast just 5% upside for the typical stock. Consensus forecasts the most upside for stocks in the Energy and Utilities sectors. The median Energy and Utilities stocks have each declined YTD, in contrast with the typical S&P 500 stock. We recommend Neutral-and Underweight-allocations to these sectors respectively. Following its strong YTD returns, analysts forecast just 2% upside for the median Info Tech stock. We maintain our Overweight recommendation in the sector. The median S&P 500 stock’s six-month implied volatility is 32, resulting in a prospective risk-adjusted return of just 0.2 (Exhibit 3).

Ironically, despite admitting that the broader market’s risk-adjusted return is a paltry 0.2%, in the very next sentence Kostin writes that the consensus sellside forecast is too low for him, and that his “top-down S&P 500 forecast of 4300 (+16%) implies additional upside to consensus estimates. Our 3-month, 6-month, and 12-month forecasts equal 3900, 4100, and 4300, respectively.”

Part of our optimistic equity market forecast is driven by our above-consensus economic and earnings growth forecast. While consensus bottom-up forecasts predict EPS of $169 in 2021, we expect a rebound in economic activity due to widespread vaccine distribution will boost EPS to $175. In addition, we expect the interest rate environment will remain supportive of elevated absolute valuation multiples. Our economists expect the Fed will be on hold through 2024 and the 10-year US Treasury yield will rise to just 1.3% by year-end 2021.”

In other words, a rehash of what he already said last month. And yet, now that concerns about inflation (and especially food inflation) are starting to emerge again, was Goldman’s surprisingly bullish take once again the wrong one? We’ll know for sure in a year’s time, but just in case the S&P somehow fails to hit the bank’s 12 month target of 4300, Goldman’s top equity strategist does a remarkable job of “CYA”, and lists three downside risks to his euphoria market foreast, which are as follows:

First, that vaccine distribution does not go as smoothly as we expect or have the economic impact we expect. Core to our equity market forecast has been the assumption that an effective vaccine is delivered and widely distributed in the US by 1H 2021. However, the first week of vaccine distribution has proven that the logistics of proper delivery are complex and uncertainty remains around the number of doses that will be distributed in 1H. Vaccine demand will also be an important driver of the recovery. Based on a YouGov poll, 41% of the population indicated it would get vaccinated, while 28% was “not sure” and 31% indicated it would not get vaccinated. A mismatch in vaccine supply and demand would represent a downside risk to our forecast, as would a slower-than-expected rebound in consumer activity even if distribution proceeds smoothly.

Second, that fiscal and monetary policy drive a sharper-than-expected rise in inflation and interest rates. In their inflation outlook, our economists project that inflation should remain soft due to slack in the labor and product markets. However, some investors have expressed concern that rebounding economic activity, additional fiscal stimulus, and sustained Fed asset purchases could lead to a spike in inflation and a rise in Treasury yields during 2021. Although Treasury yields remain low in historical terms, the speed of any increase matters. Equities have historically been able to digest gradually rising long-term interest rates, particularly when driven by improving growth expectations. However, equity returns have historically declined when rates rise by more than 2 standard deviations in a month (~37 bp today, see Exhibit 4).

Third, that policy uncertainty weighs on US equities. If Democrats win both Georgia Senate run-offs on January 5th, they would assume control of the Senate with a 50-50 split. Prediction markets currently put the odds of Democratic control of the Senate at 31%. The options market currently reflects a clear jump in volatility around the January 5th election. We ultimately see upside in equities beyond January, regardless of the election outcome, given our economic forecast and the tradeoff between fiscal and tax considerations. Regulation has also been in focus for investors as antitrust lawsuits were recently filed against both FB and GOOGL. We found that previous examples of antitrust lawsuits resulted in valuation contraction and a downshift in sales growth for involved firms (Competition, concentration, and regulation). These stocks comprise 50% of the Communication Services sector. In November, we downgraded the sector to Underweight.

In short, in a perfect world, Goldman sees stocks rising another 600 points from here over the next 12 months. But for that “priced to perfection” scenario to occur, there can’t be any glitches: be it in the fight against covid, the outcome of the Georgia Senate runoffs (where a Democratic win would likely result in a sharp spike in yields as market price in trillions more in stimulus over the next 4 years), and the continued dormancy of inflation in a time when an objective look at costs shows that prices for several key goods are already surging well in excess of incomes.

So while much uncertainty remains as we enter 2021, one thing is certain: Goldman’s prop desks will have record trading profits as it continues to take the other side of the trade that it is pitching to its clients, similar to what it did just before the housing market imploded in 2007 when Goldman was aggressively shorting RMBS and CDOs. The only question we have is whether Goldman has already starting shorting the market…