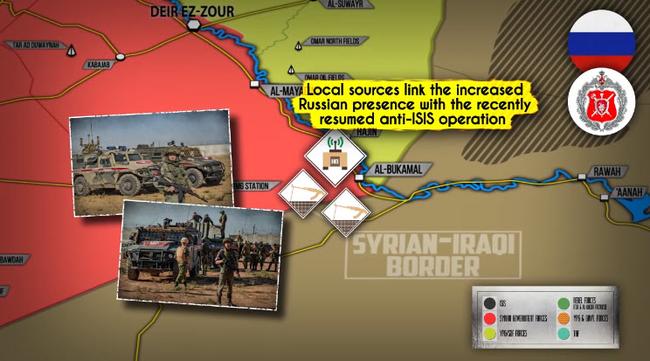 Over the past weeks, the Syrian Army and its allies have intensified their operations against ISIS cells hiding in the Homs-Deir Ezzor desert.

According to pro-government sources, during the past few days, Syrian government forces and Iranian-backed militias carried out a series of raids to the south of the Palmyra-Deir Ezzor highway and southeast of al-Mayadin. Pro-militant media outlets clam that over 10 Syrian soldiers and 15 ISIS members died in these clashes.

The Russian Aerospace Forces also resumed their strikes on ISIS targets in the desert region. Pro-opposition sources say that the Russians delivered over 100 airstrikes. Indeed, the intensity of this campaign demonstrates that the regularly resurfacing ISIS cells, which actively exploit the state of chaos on the Syrian-Iraqi border, pose a notable security threat.

Just a few days ago, the Russian Military Police established a local HQ and several positions in the Syrian town of al-Bukamal, which lies on the border with Iraq. Local sources link the increased Russian presence on the border with the recently resumed anti-ISIS operation there.

Given the de-facto collapse of security in the area on the Iraqi side of the border, the Syrian, Iraqi and Iranian-backed forces deployed near al-Bukamal and al-Qaim are now the major factor deterring the terrorists operating there. At the same time, Israel and mainstream Western propaganda argue that al-Bukamal is just the base of the Iranian Islamic Revolutionary Guard Corps and thus must be destroyed.

While the presence of Iranian-backed forces there is an open secret, attacks on them and their allies, which were repeatedly conducted by Israel and even the US-led coalition, have in fact supported the ISIS agenda.