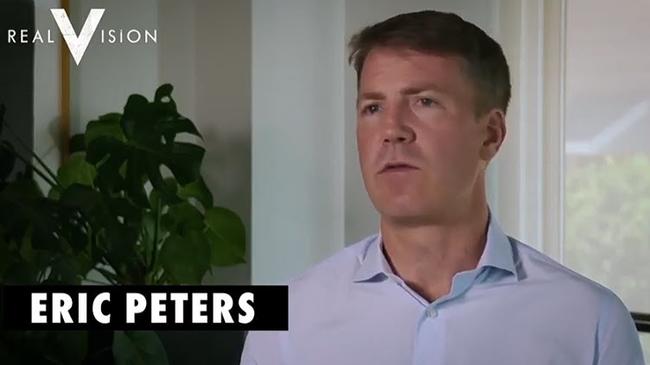 
It’s oddly fitting that on the day bitcoin finally breaks out above $20,000 – a critical psychological level first established during the Dec 2017 meltup – we learn that a new and formerly unknown massive bitcoin whale, who just happens to be one of the most respected hedge funds currently operating, has backing from legendary traders and is a frequent guest on these pages – has been quietly accumulating a lot of bitcoin… some $1 billion worth.

According to Bloomberg’s Erik Shatzker, a hedge fund specializing in volatility bets – one which is very familiar to regular Zero Hedge readers – has emerged as one of the largest investors in Bitcoin after quietly buying more than $600 million in cryptocurrencies and joining forces with legendary trader Alan Howard, co-founder of Brevan Howard Asset Management.

Echoing what we have said repeatedly in recent months, namely that the next leg higher in bitcoin will come on the back of insitutional rotation into the cryptocurrency, Eric Peters, CEO of One River Asset Management, told Bloomberg he set up a new company to seize on the growing interest in cryptocurrencies among institutional investors. In addition to its initial purchases, One River Digital Asset Management has commitments that will bring its holdings of Bitcoin and Ether to about $1 billion as of early 2021.

“There is going to be a generational allocation to this new asset class,” he said. “The flows have only just begun.”

Peters said he was wary of triggering a spike in the prices of Bitcoin or Ether as he was quietly building up his initial position. He described executing his trades as inconspicuously as possible and finishing all the buying in November before Bitcoin hit $16,000.

The investment in bitcoin is a departure for the vol-specialist: the company, which was founded by Peters in 2013, One River employs volatility and trend-following strategies in an effort to make money whether asset prices are rising or falling. As reported earlier this year, its Long Volatility Fund and Dynamic Convexity Fund surged during the coronavirus selloff in March and are up 33% and 40% this year, respectively. The firm’s total AUM is about $1.6 billion; we assume that its bitcoin holdings are not included in this number.

Peters, 54, whose market insights appear weekly on its website, said that he was drawn to digital assets for the same reasons he anticipates more volatility in financial markets: Now that interest rates in the developed world are at or below zero, fiscal spending by governments combined with debt monetization by central banks has emerged as the primary way to spur growth. The consequence of that increase in the money supply, he thinks, will be currency debasement and, potentially, inflation. Ultimately, all those trillions in newly created liquidity are making their way into alternative currencies such as cryptos.

“Covid-19 provided the ultimate catalyst for that transition,” Peters said. “This is the most interesting macro trade I’ve seen in my career.”

While legacy investors have traditionally been skeptical to invest in bitcoin, Peters is certainly not the first investor to predict a flood of money into cryptocurrencies. In addition to this website, former Fortress founder Mike Novogratz, who started the crypto-focused Galaxy Digital Holdings, has been saying “the cavalry is coming” for years, only to watch as Bitcoin slumped to a recent low of $3,157 in December 2018 before recovering. Several other heavyweight crypto managers have emerged, including Pantera Capital, Polychain Capital and Galaxy.

Meanwhile, in the clearest indication of rising interest in fiat alternatives, assets in the Grayscale Bitcoin Trust, the largest player, have swelled to more than $10 billion. As we discussed last month, the exponential ascent of the Grayscale Bitcoin Trust in recent weeks suggests that other institutional investors who look at bitcoin as a long-term investment have been playing perhaps a bigger role in recent weeks than quantitative funds, such as CTAs. It now turns out that One River was one of the biggest accumulators.

As we also explained previously, the ascent of Grayscale Bitcoin Trust suggests that bitcoin demand is not only driven by the younger cohorts of retail investors, i.e. millennials, but also institutional investors such as family offices and asset managers (something which in retrospect was proven to be correct). These institutional investors appear to be the biggest investors in the Grayscale Bitcoin Trust, perhaps reflecting their preference to invest in bitcoin in fund format. What makes the past five weeks flow trajectory for the Grayscale Bitcoin Trust even more impressive is its contrast with the equivalent flow trajectory for gold ETFs, which overall saw modest outflows since mid-October, as shown in the chart below.

This contrast lent support to the idea that some investors that previously invested in gold ETFs, such as family offices, were looking at bitcoin as an alternative to gold. As JPMorgan previously highlighted, the potential longterm upside for bitcoin is considerable if it competes more intensely with gold as an “alternative” currency, given that the market cap of bitcoin (at $383bn) would have to rise about 7 times from here to match the total private sector investment in gold via ETFs or bars and coins which stands at $2.6tr.

As a reminder, it is this anticipated inflow into bitcoin from institutional investors that prompted JPMorgan to admit last month that it was wrong about the Bitcoin bull run and renewed its $140,000 bitcoin price forecast:

“the potential long-term upside for bitcoin is considerable we think as it competes more intensely with gold as an “alternative” currency given that Millennials would become over time a more important component of investors’ universe.”

But back to Peters, who said his ultimate goal is to build a “blue-chip fiduciary” for institutional clients seeking digital assets, and won’t be trading aggressively or making venture-capital investments. The funds will charge 1% fees and allow investors to sell in a day. While gold also stands to appreciate in a world of debased currencies and inflationary fears, Peters thinks Bitcoin and Ether prices can far outpace that rise. Recent fund flows confirmed this observation: as we noted at the end of November, there was been a notable divergence in the prices of gold and crypto starting in early October…

… which culminated with record inflows to bitcoin offset by record outflows from gold.

But if the thesis is ultimately one of fiat debasement and a shift away from fiat, why not just buy gold? “There definitely are more risks to this than gold, which has been around for thousands of years, but there’s also way more convexity,” Peters said. “There are very few convex bets that’ll help your portfolio when these macro forces start playing out.”

What is interesting is that Peters’ transformational investment seems to be a U-turn from some of his recent thoughts on the cryptocurrency, when as recently as 2017 he warned that governments would eventually muscle out investors in the volatile asset class:

… the future of cryptocurrency is not as it seems. Once private markets perfect cryptocurrency technology, governments will commandeer it, killing today’s pioneers. Then with every cryptodollar, yen, euro and renminbi registered on their servers, they’ll have complete dominion over money, laundering, taxation. They’ll track every transaction. Imposing negative interest rates in an instant. There will be no hiding, no mattresses. And in a deflationary panic, they’ll instantaneously add an extra zero to every account, their own especially.

Ironically, it is Peters that has now emerged as one of the top pioneers in the emerging field.

Lending legitimacy to the new venture is its direct support from one of the most iconic macro traders: Alan Howard, who co-founded Brevan Howard, is playing a number of supporting roles. In addition to investing in One River Digital’s funds, Brevan Howard also bought a 25% stake in the business as reported in October. A company he controls, Elwood Asset Management, is providing One River Digital with trading services, market analysis and technical support. Howard intention to allocate $1 billion ti cryptocurrencies was first reported by the FT back in August 2019. This is what Elwood CEO Bin Ren said then

“Losing traditional assets in the real world is hard. In the digital world, it’s very easy to lose assets — put in the wrong address for a bitcoin transfer and it’s gone forever,” said Mr Ren, the former chief investment officer of Brevan Howard’s Systematic Investment Group. He says Elwood has been screening crypto hedge funds and has identified up to 50 that “probably satisfy our due diligence”.

We now know that the winner of this diligence process was Peters’ One River.

Another iconic investor with One River Digital is the fund formerly known as “50 cent” for its recurring purchases of deep out of the money VIX calls – Ruffer LLP. Ruffer is best known for having made a whopping $2.6 billion in March as markets crashed. On Tuesday, Ruffer disclosed a 2.5% position in Bitcoin in one of its funds, describing it as “a small but potent insurance policy against the continuing devaluation of the world’s major currencies.”