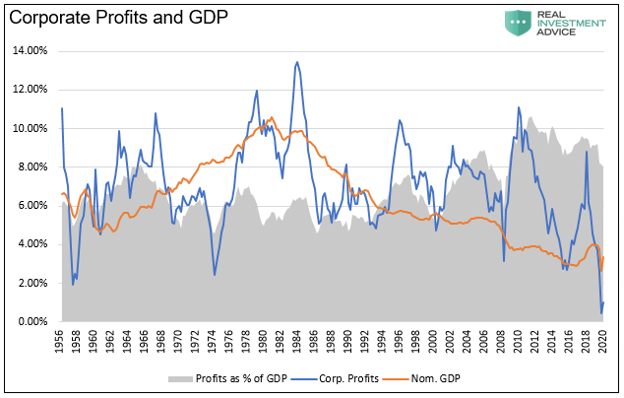 
Authored by Michael Lebowitz via RealInvestmentAdvice.com,

Meadow Soprano speaking to her father Tony: “Are you in the mafia?”

Tony: “That’s total crap. Who told you that?”

Meadow: “I lived in the house all my life. I’ve seen police come with warrants. I’ve seen you going out at three in the morning.”

Tony: “So, you’ve never seen Doc Cusimano going out at three in the morning on a call?”

Meadow: “Did the Cusimano kids ever find $50,000 in Krugerrands and a .45 automatic when they were hunting for Easter eggs?”

As we discussed in The Fed’s Monetary Animal House, appearances can be deceiving. Most major stock indexes are up double-digit percentages year to date, implying significant economic growth and a booming outlook for businesses, workers, and households.

Economic activity is well off the lows seen in April and May. The same data also suggests we are nowhere near the same level of activity seen pre-COVID. To quote New York Fed President John Williams, “we are still in a profound recession”-12/2/2020.

Is the economic rebound real and durable, or a false positive supported by record levels of artificial stimulus? Does current investor confidence hinge on more trillion-dollar stimulus agreements? Although we have our suspicions, we won’t know the answers for quite some time.

The Economy Versus The Market

In Bloomberg’s Opinion section, Nir Kaissar analyzes the historical relationship between the economy and equity market returns. Using GDP and corporate sales, Kaissar finds a historically weak correlation to S&P 500 returns. His conclusion is simple: “The stock market doesn’t care about the economy.”

Based on his analysis and what we see today, it is hard to disagree.

Regardless, if we are to invest in stocks, we must understand what we are buying. A shareholder of a publically traded company is an owner of the company. The share price represents the present value of a future stream of earnings. It is no different from buying a restaurant, dry cleaner, or a financial advisor.

Shareholders assess many factors that drive future earnings. Of them, broad economic activity ranks at or near the top for most companies.

The following graph compares the 10-year growth rates of corporate profits and GDP.

The correlation above is not statistically strong with an R-squared of .40, but visually you can see a relationship exists. The relationship would be more robust if not for fluctuating profit margins.

The fact of the matter is there must be a relationship. Corporate revenue is almost entirely dependent on consumer and government spending. In 2019 those two factors accounted for 87% of GDP.

Since the 1980s, the percentage of S&P 500 companies with sales growth over 15% has been declining in line with economic growth.

Regardless of what anyone tells you, the underlying long term basis for investing in stocks is future earnings and, ultimately, the economy.

How Much Economic Growth Should We Expect?

In The Decade Long Path To Recovery, we highlight following the last three recessions; each economic expansion has been sequentially weaker.

The fiscal response to the COVID crisis dwarfs the responses to prior recessions. Keep in mind there are likely many more trillions of stimulus coming in 2021 and beyond. The ratio of Federal debt to GDP has surged from 107% to 127% in just two quarters and will proceed higher.

Fiscal spending is mostly non-productive. It boosts economic activity for a short period. However, and this is important, it also:

Barring an unexpected burst of productivity, inflation, or maybe even Martians landing on earth and buying our goods, we find it nearly impossible to forecast longer-term economic growth matching the historically paltry 2.25% rate of the 2010s.

How Much Economic Growth Is The Market Predicting?

To help with this task, we share Lance Robert’s article- Is The Narrative All “Priced In?”

The article compares one-year forward earnings expectations from December 2019 to the current estimate for year-end 2021. As he wrote, “However, earnings for 2020 will not come in at $167/share, but rather closer to $93/share. Such is more than $74 lower than estimated, leaving investors holding assets that have doubled in valuation from 19x to 38x earnings.” He then explained analysts expect earnings to be $143.09 per share at the end of 2021.

Current EPS estimates for December 2021, implies that earnings will grow 30% next year.

Let’s assume the market is right for 2021, even though forward earnings tend to decline as the year progresses. We can then solve a growth rate that brings EPS back to where a 6% growth rate would have put earnings in 2025 ($199). With these assumptions, math implies a growth rate of 8.5% for the years 2022-2025, as shown below.

Let that sink in. After an assumed 30% growth rate in 2021, the market assumes earnings will grow 2.5% faster than in the seven years before COVID.

Is the market correct in pricing in more robust economic growth than was witnessed during the last expansion?

Should investors consider historical data showing that economic growth will likely be slower than during the prior expansion?

The problem in answering the question is there are many other factors affecting stock prices. Below are a few influencers that cloud reality and potentially provide fodder for even more precious equity valuations and higher prices.

**PRESIDENT TRUMP SAID U.S. IS IN MIDST OF AN ECONOMIC BOOM, LOOK AT NASDAQ

Yes, Mr. President, the NASDAQ implies the economy should be booming. Facts, however, tell us something vastly different.

Further, and often disregarded, is the fact that the economy was not organically strong before the pandemic hit. Swift monetary and fiscal actions boosted economic activity and provided significant liquidity to markets. Yet, at the same time, they handicap future economic activity.

As a result of factors other than earnings and the economy, stock prices are at record highs. The implication is that the basis for owning stocks, earnings, have failed to keep up with stock prices. Worse, it is highly unlikely earnings will meet the market’s lofty implied expectations.

Should we believe Tony? Or should we ask the right questions like his daughter Meadow?

In February and March, the 34% selloff offered a painful reminder and glimpse of the consequences for ignoring the truth.

Peter Schiff: The FTX Debacle Was Ultimately The Fed’s Fault