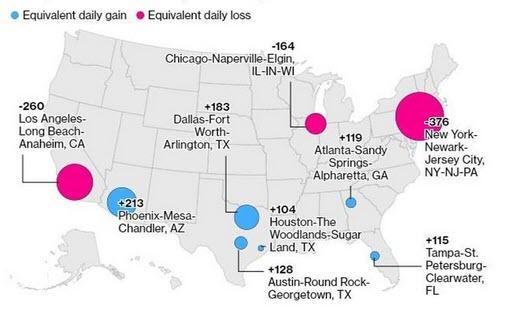 
The pandemic hasn’t just brought with it economic turmoil; it has also highlighted a trend of people fleeing U.S. cities in favor of the suburbs. The exodus has been helped along by liberal politicians embracing a “defund the police” message in the cities where policing is needed the most – like Chicago, which we have documented – making the decision to leave cities much easier for many people.

But surprisingly, the wheels were already in motion for this trend prior to the pandemic, a new report from Bloomberg notes.

The report points out that New York was losing 376 residents per today to domestic migration already in 2019. This marked an increase in more than 100 people per day, the report notes.

Justin Hollander, a professor of urban and environmental policy and planning at Tufts University, said: “New York’s population decline has been building up before Covid. It will certainly accelerate as preferences for lower-density environments drives populations.”

And it’ll also accelerate as international arrivals slow down. Last year almost 60,000 people moved to New York while 200,000 people left. Arrivals will continue to be muted as travel and air traffic are both still mired in red tape relating the pandemic.

LA and Chicago saw similar trends last year. In fact, both cities “have been losing population since 2017”, Bloomberg noted. The appeal of states like Florida and Texas has grown and “shows no sign of ebbing”, according to Hollander. The six cities that saw inflows of more than 100 people per day “were all in the south”, the report notes – including cities like Phoenix and Dallas.

In addition to more people leaving cities, the number of births across the country looks as though it is going to trail prior years.

This won’t just affect population numbers, but tax revenue for states. New York lost $9.6 billion in resident earnings in 2016 and 2017 due to the outflows. For every $1 of income brought into the state, $1.80 was lost, the report notes.

Perhaps having never studied the Laffer Curve in Econ 101, this apparently seems like a great reason for Mayor De Blasio and Governor Cuomo to lob countless regulations and new taxes onto their citizens while embracing the chaos and lawlessness that has developed in their streets throughout the year.

Like politicians in California, New York’s political leaders don’t seem to notice the effect that their policies are having. But maybe when the cities become barren and the state is on the verge of economic collapse it’ll become clearer. We’re not holding our breath, though.