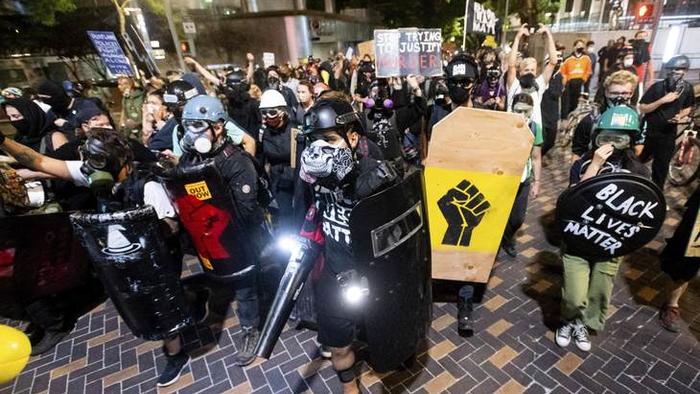 The antifa occupiers at the autonomous zone that sprung up in Portland this week appear to be preparing for a siege. As PJ Media’s Victoria Taft reported, antifa squatters took over a house in Portland and when the government rightly evicted them, they set up an autonomous zone.

On Wednesday, Portland’s police chief reported that antifa has fortified barricades, stockpiled weapons, set up armed guards, and threatened to kill police officers. Both the police chief and the mayor have urged the rebels to lay down their arms, but it appears they are refusing to do so.

“We want a peaceful & safe resolution to the occupation of public space on N Mississippi Ave. We are greatly concerned about the fortification of barricades, stockpiling of weapons, armed sentries, attacks on journalists & threats to kill officers in graffiti in this public space,” Chief Chuck Lovell tweeted on Wednesday. “I encourage those involved to reach out to our demonstration liaisons so we can discuss a peaceful outcome.”

“We are aware of the stockpile of weapons and the presence of firearms. We are aware of the threats to the community, to media, to police. We’ve seen the attacks. The Portland Police will enforce the law and use force is necessary to restore order to the neighborhood,” Lovell added in a brief speech about the autonomous zone.

I wanted to say a few words to each of you about activity along North Mississippi. pic.twitter.com/Icq4mpzTAL

On Tuesday, Mayor Ted Wheeler (D-Portland) announced he was “authorizing the Portland Police to use all lawful means to end the illegal occupation on North Mississippi Avenue and to hold those violating our community’s laws accountable. There will be no autonomous zone in Portland.”

Wheeler went on to acknowledge the extremely radical claims of Marxist Critical Race Theory that inspire much of the antifa rioting.

“We all agree many of our nation’s systems and structures are fundamentally racist and require significant reform. There’s a housing crisis, a health care crisis, an education crisis, an employment crisis, a mental health crisis, and an addiction crisis,” he argued. “All of these crises are magnified in urban areas, including Portland. And, these crises disproportionately impact Black people.”

Yet Wheeler refused to follow the logic of the more radical Black Lives Matter and antifa crowd, who use those arguments to justify rioting, looting, and arson.

The antifa occupation appears to have emerged after a judge ordered that people illegally occupying a home must be evicted. Activists appear to have seized on the eviction as racist, oppressive, or otherwise illegitimate. Wheeler defended the eviction, noting that “Multnomah County chose the time, place and manner of the eviction and Portland Police provided support.”

“It’s time for the encampment and occupation to end,” the mayor concluded. “There are many ways to protest and work toward needed reform. Illegally occupying private property, openly carrying weapons, threatening and intimidating people are not among them.”

Wheeler is right to defend the rule of law in this case, but his sympathy for Marxist Critical Race Theory undermines his case. If America’s “systems and structures” are “fundamentally racist,” as the mayor claimed, that inspires irrational anger and an aimless attempt to overthrow the existing order — by force, if necessary.

Wheeler himself repeatedly insisted that the violent antifa riots that racked Portland this summer were peaceful. He even attended one such riot, and he claimed that there was no justification for federal officers using tear gas — while rioters threw a Molotov cocktail near where Wheeler was standing!

Portland Police should restore order, break up the antifa autonomous zone, and defend the peace and safety of the city’s citizens around N. Mississippi Ave. This should be a no-brainer. Sadly, the very Marxist Critical Theory that inspires the riots has infiltrated the commanding heights of American culture, so much so that even the public official whose job it is to order the cops to restore order is echoing the very talking points that antifa militants use to justify their crimes.

The riots this summer, ostensibly focused on helping the black community, destroyed black lives, black livelihoods, and black monuments. At least 26 Americans have died in the riots, most of them black. The riots proved the most destructive in American history when it comes to insurance claims.

Police should break up the siege, and quickly. Wheeler should also consider the consequences of his radical rhetoric.