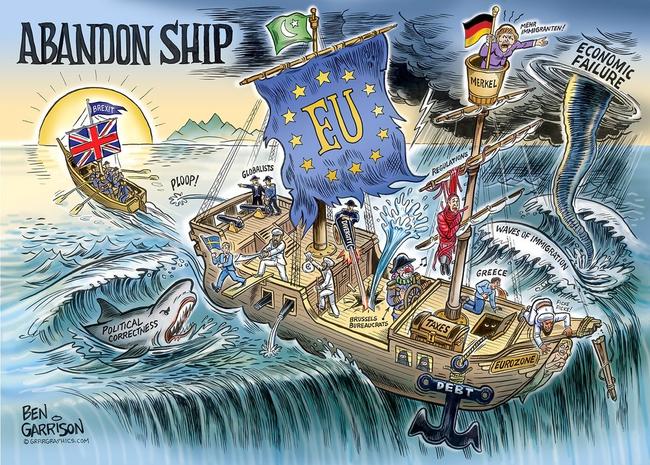 After hearing the disappointing news from Brussels – a dinner where nothing really moved forward, except a splutter-saving agreement to stretch out the talking till Sunday – it looks like a no-deal Brexit exit is on the cards. The blocks to a deal were put in position the moment Boris took No 10 and grandly promised the UK the best deal ever with his faux-Trumpian bluster.

You can paint it as Europe punishing the UK for the temerity of abandoning the project, Europe being defensive to demonstrate to waverers how leaving the EU is impossible, the UK’s foolishness for leaving, or for the UK being silly for not agreeing to give up its fish and leave its sovereignty with Brussels. Or, it might be the reasons the UK are leaving are most obvious in our likely rejection of Europe’s demands.

My immediate thought was to panic buy. I was thinking of running to the shops this morning to buy a big wheel of Brie, a couple of cases of Champagne, and all the other stuff we all love about Yoorp.. and then I thought about it. Who cares if there are suddenly shortages of Yoorpean stuff.

I’ve bought my Christmas sparkler – a couple of cases of the excellent Black Dog, crafted just off the South Downs on the slopes of Ditchling Beacon by my chum Jim Nolan. (Seriously it’s a cracking sparkling wine, knocks the expensive UK wines and top champagnes out..) Cheese this Christmas will all be British, including Isle of Wight Blue – it really is excellent. In fact, my big worry is can I get some Gallybagger? It will be sad to be without a toasted camembert, but Welsh Rarebit is some much better.

And from next year.. Well I guess we will all be become pescatarians… because the UK is going to have an awful lot of fish. I know some Scots and Devon fishermen and can guarantee they won’t be happy.. there will be so much fish they’ll be giving it away for nothing! (Yes, we will find an accommodation to let the Dutch, Spanish and Danes have access to our fish, but any French boat a milli-inch over on our side will be sunk with prejudice!)

Sure, we might have to build a couple of gunboats to protect our maritime borders – but that will create jobs!, Heaven help you if your French car breaks down – your fault for buying it in first place.

The bottom line is if the UK exits without a sane and logical trade deal than would have benefited everyone, it’s not the end of the world. Dashed awkard though. Messy, but just means we will have to try even harder to recover from the ravages of Covid and the stupidity of Boris.

Whenever you think it may overwhelm you, remember: Things are never as good as we hope, but never as bad as we fear.

I am pretty sure the UK and Yoorp have reached the end of what could have have been a constructive negotiation where the UK would have got back our impression of sovereignty and retained Europe as our closest trading partner. We would have been outside the EU, but within Europe. Everyone would have been nice and happy.

The UK decided to leave Europe for (somewhat misguided and badly informed) reasons of sovereignty and pride. Yoorp wants to keep us tied to their rules – and I can understand exactly why when face with what they’ve seen in Westminster.  We Brits are not perfect – and it’s now time we learn that the hard way. Neither side has room left to compromise. So let’s just get on with it.

And if we get to tar and feather Boris Johnson for not delivering another promise… what’s to worry about..?