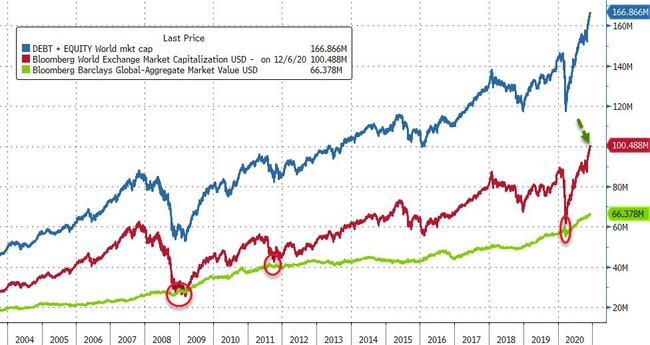 
One hundred trillion dollars… that’s a 1 followed by 14 zeros! That is the current market capitalization of global stock markets – a level never before seen in history.

And judging by the smorgasbord of strategist forecasts for 2021, there is no stopping this surge (until of course, it all goes full Thelma-and-Louise and confidence in global fiat collapses).

Which is ironic since, as Daniel Lacalle detailed earlier,  also according to JP Morgan, equity markets have not been this expensive so early into an economic recovery phase in the last twenty years.

The Greed vs Fear Index also shows extreme optimism, while the Call to Put ratio in derivatives, that reflects the derivative exposure to a rising market, is also at multi-year highs. Meanwhile, the amount of negative-yielding bonds globally has risen to almost $18 trillion…

…and the High Yield Index has risen to pre-crisis levels (and spreads to record lows).

Many factors explain this level of optimism in markets. The news about vaccines and estimates of a rapid economic recovery accelerated investors’ bullish bets.

However, we must remember that all consensus estimates for 2021 already discounted the end of the pandemic, and that the quick recovery so many hoped for is not happening, and definitely not in a way that would justify the aggressive increase in risk.

Furthermore, the OECD released its latest estimate of economic growth for 2021 on the 4th of December and, opposite to what the most bullish investors hoped, the international body did not upgrade its estimates for the major economies. The same happened with the 2021 outlook published by S&P Global.

Recent macroeconomic figures have not added hopes for a stronger recovery. The manufacturing and services PMI (purchasing managers’ index) for the eurozone showed deep contraction in services and a weakening trend in manufacturing with weak new orders and job losses even in November. The United States economy has published more robust figures, but the jobs slowdown is concerning. While manufacturing and services remain in expansion in November, the U.S. economy added less than a third of the jobs it increased in October, and the labor participation rate fell slightly to 61.5% with unemployment falling to 6.7%, driven mostly by concerns about new lockdowns and more taxes and rigidity in the jobs market if Joe Biden is confirmed as president.  Even the economies that were showing positive surprises in October are showing an important slowdown, as seen in the Daily Activity Index published by Bloomberg.

So why are markets so bullish? Central banks play a major role in this risk-taking frenzy. The balance sheet of the major central banks has soared to more than $20 trillion, the ECB balance sheet is now more than 61% of the GDP of the eurozone and the Federal Reserve exceeds 34%. Many market participants are using an often-repeated “Bad Is Good” strategy. A large number of investors ignore macro and debt data and increase bullish bets assuming that if figures remain weak, central banks will increase their stimulus plans.

Why is this dangerous? Central banks’ ignore the excessive market valuations and risk of asset bubbles created by their “expansionary” policies because they see these as small collateral damages of a wider and more important impact on the economy. As long as headline and core inflation in their economies remains weak or below target, they do not see any risk. But there are plenty.

Some investors may know that they are taking too much risk, but a large part also thinks that risk is gone because central banks will continue to implement stimuli, and this is really problematic. Too much debt and too much risk are not irrelevant factors, they mean lower growth, weaker productivity and higher probability of a crash in a few months. We have seen it in 2018, now in 2020.

Risk builds slowly and happens fast. Central banks cannot continue to ignore the insanity of sovereign bond valuations and the risk of concentration in markets. Low inflation is not an excuse to implement wrong policies even more aggressively. Governments cannot fall into the perverse incentive of recklessly adding debt because the cost is cheap. It is time to understand that the recovery will not come from larger deficit spending and monetary easing, but from prudent investment and saving. Demand-side policies have failed in this and the previous crisis. The solution to wrong policies is not to implement more of them. The world needs to stop this insane downward spiral of debt and constant bubble booms and busts.

The world needs more supply-side policies and less demand-side ones. This matters to everyone because the burst of the excessive optimism of these months of 2020 may end badly, not just for markets, but for an already crippled real economy.