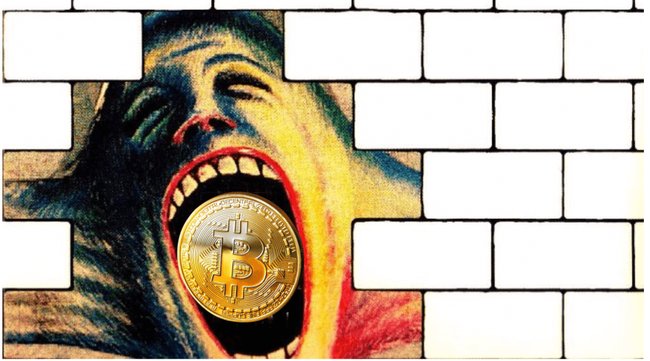 Now that Bitcoin has hit the wall of previous highs perhaps time for another technical update.

And before you @ me accusing me of being just another naysayer or bear a quick refresher:

In August, when Bitcoin was trading at $11,181, I had outlined a technical case for Bitcoin to hit $17,000. This was the chart I had presented then which left room for a retest of the trend line (outlined in pink):

And see chart below of what happened since.
So note this was classic technical, a breakout, a retrace backtest of the trend line and rally from there.
All signaled in advance 😉$BTC pic.twitter.com/TXQb7dzGiw

And then Bitcoin never looked back and marched straight toward the technical target:

My general view on the reaching of technical targets: See the set up concluded then wait for the next technical signal.

Bitcoin promptly marched to further highs and retested the highs of 2017. The technical signal that emerged now is that of a negative divergence on the RSI:

Fwiw: The most recent high on $BTC came on a negative RSI divergence. pic.twitter.com/Io10ECYzDS

What’s it mean? Perhaps nothing, perhaps everything for signals such as this can be meaningful if confirmed. After all the previous highs in 2017 came on a very similar RSI divergence before the complete reversal of the rally:

Should the divergence confirm here as well then Bitcoin is at risk of a sizable retrace move of the recent rally which in itself would not necessarily be bearish, but, dependent how it plays, could set up for an even larger rally down the road.

What would constitute a healthy retrace and correction? The fib levels outlined above offer a guidepost. One of the most common technical retrace points would be the .382 fib, in this case of particular interest as it currently offer perfect confluence with the 2019 highs at $13,790. Note also the secondary support line just beneath.

I should also note that following Bitcoin exceeding my $17,000 target the recent reversal stopped at exactly the $17,000 level, and bounced from that level meaning it is now support again confirming the previous technical target level. As such the corrective risk scenario outlined is by no means a given as long as the $17,000 area holds, which also means the current highs could be exceeded still, but the negative divergence continues to bear watching.

So Bitcoin is in a watch phase now with risk of a larger corrective scenario unfolding.

Why could the corrective scenario ultimately be bullish? For unlike the 2017 scenario support levels have formed over the past 2 years and they leave room for a different roadmap the could set up for significant new highs to come:

It’s somewhat unproductive to speculate too much about future scenarios without confirmation but I’m offering this potential cup building outlook nevertheless as how such a roadmap could firm over the next few months if the corrective scenario unfolds.

When would the corrective move actually be bearish? In my view a sustained drop below the .618 fib for it risks invalidating the original breakout of 2020.

Bottomline: As Bitcoin has reached the previous highs of 2017 and it very much extended following its near vertical run since the original trend line back test a corrective move may actually be healthy and a retrace to the .382 fib for example may set up as a buying opportunity. But with any speculative asset of high volatility Bitcoin is subject to a lot of hype leading to overly risk on behavior which can end in tears as we saw in 2018.

Expressed in another way: From a technical perspective bitcoin bulls may want to welcome a correction to set up for a stronger base to build upon as opposed to a further vertical move higher from here subjecting Bitcoin to risking another uglier technical breakdown down the road. But that’s just my opinion

Bitgert (BRISE) Could Be The Next Solana (SOL) – Crypto Experts’ Opinion

Cellphone at Third Base: Baseball Player Mistakenly Runs the Bases with His iPhone – Slashdot