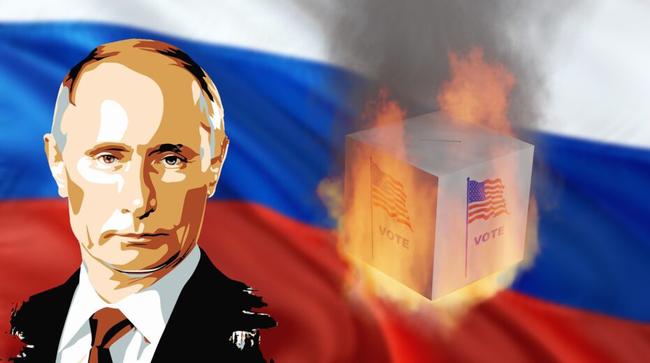 The United States’ election victory of Democrat presidential candidate Joe Biden has yet to be officially confirmed. That requires the 500-plus Electoral College comprising the 50 federal states to cast the final vote when the constitutional body meets on December 14. Biden holds a commanding lead of over 300 delegates in the Electoral College, more than 70 above Donald Trump’s quota and decisively more than the 270 threshold required for election to the White House.

Nonetheless, already one thing is indisputably clear. Biden’s nominal victory from the popular vote tallies is glaring proof that Russia did not interfere in the American presidential ballot. Not in 2020. And not, we may discern, in 2016, nor in any other election. Yet the silence in US media over this obvious conclusion is deafening.

Four years of frenetic and unsubstantiated allegations of “Russian interference” have disappeared overnight, it seems. Poof! Gone! As if by a magic conjuring trick. Now you see it, now you don’t, so to speak.

The New York Times has declared the recent presidential contest a “great election.. a resounding success free of fraud”. The Department of Homeland Security pronounced the election to be the “most secure in American history.” Other US media outlets have jettisoned supposed political neutrality and can barely contain their elation at Biden’s electoral victory.

But hold on a moment.

In the months and weeks leading up to the November election, there was a fever pitch in US media among politicians, national security chiefs, pundits and anonymous intelligence sources that Russia was allegedly stepping up “interference efforts” to get Trump re-elected.

Those evidence-free claims were predicated on the equally absurd assertion that Trump was a Manchurian candidate for the Kremlin. That “Russiagate” fable was first spun in 2016 and for the past four years elaborated into a tangled web to “explain” how a maverick former reality TV star had been elected to the White House.

Suddenly, however, the Democrats and supportive US media are now asserting that the voting process was impeccable and unblemished by any malfeasance. Of course they would say that in order to bolster legitimacy of Biden’s win against the Republican White House incumbent Donald Trump. But the thundering takeaway which the US political class and media are bizarrely ignoring is that Russia did not interfere not in the 2020 race nor in any other election. Russia has always categorically said it is not meddling in US politics and its electoral process. Turns out that Russia is de facto vindicated in its protestations against American slander.

The “Russiagate” nonsense was hatched by Democrats, their supportive media and intelligence agencies because they could not come to terms with the reality of why Trump beat the then establishment-ordained candidate Hillary Clinton in 2016. Could it have been because Clinton and the Democrat party was repudiated by popular sentiment due to perceived corruption and overseas wars? No, another “explanation” had to be found. And the US political establishment came up with the “Russian interference” narrative.

No matter that the Mueller investigation found after 22 months of probing and hundreds of millions of taxpayer-dollars spent that there was no evidence of “Russia collusion” with the Trump campaign. Nevertheless, Mueller and the Democrats, their media and intelligence backers, persisted in the spurious notion that Russia meddled in the 2016 election and, allegedly, was continuing to meddle, purportedly with even more sophisticated, nefarious techniques.

How can US politicians, intelligence officials and media credibly claim that Russia interfered in 2016 and in mid-term congressional elections in 2018, but now in 2020 it evidently did not? The most logical explanation is simply that Russia never did.

Four years of hysterical American accusations against Russia have transpired to just that: bogus hysteria. US politicians, media and so-called intelligence gurus should be held to account for fabricating what is perhaps the biggest hoax ever played on the American public.

Though, one can be sure that they won’t be held accountable in a formal way. Venal power doesn’t work like that. And the US political system has built-in layers of self-protection for the political class never to be prosecuted. But in an informal no less real way, the system is being held to account by the wider public who are increasingly holding it in contempt and distrust. The political class and their plaything media are losing the moral authority to govern. This goes beyond mere Trump Derangement Syndrome. The systematic lying and deception over alleged Russian interference perpetrated on such a grand scale has fatally damaged the credibility of American institutions. Not just in the US, but around the world too.

Equally lamentable is the corrosive, damaging effect that the bogus hysteria has had on bilateral US-Russia relations and international tensions. Relations are at a dangerous all time low comparable to the depth of the Cold War. This has in turn sabotaged diplomatic efforts to strengthen arms controls and global security. The anti-Russia hysteria has led to the US abandonment of key nuclear weapons treaties, the Intermediate-range Nuclear Forces (INF) treaty and soon the New START.

The Russophobia that has been whipped up as a political weapon against Trump over the past four years is not something that can be easily put aside. It has engendered deep-seated hostility against Russia. During the presidential debates, Joe Biden vowed that the would take a tough stand against Russia for “interfering” in US politics. The incoming administration is being mentally held hostage by its own Russophobia which was cultivated on entirely false grounds.

It is disturbing how the US nation has been dragged into an obsession about alleged Russian malign activities, an obsession which turns out to be a mirage. Not for the first time either. Recall the Cold War Red Scares and McCarthyite witch-hunts which poisoned American society.

The implications are daunting. How can bilateral relations with Russia be restored? How can an intelligent dialogue be conducted with a nation whose leaders are so self-deluded and irrational?

Moreover, this is a nation whose leaders presume to have the prerogative to use overwhelming military force whenever they deem so. It is not unlike the driver of a juggernaut vehicle on a precipice who is hurtling along while out of his brain on misconceptions.