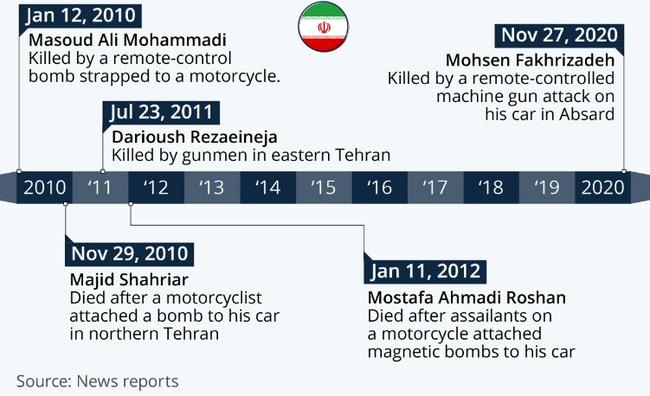 
New details are emerging about an attack that killed Iran’s most senior nuclear scientist last Friday. Initially, it was thought that Mohsen Fakhrizadeh’s car was attacked by undentified gunmen armed with automatic weapons and explosives. However, a Fars news agency report on Sunday evening states that Fakhrizadeh was actually killed by a remote-controlled weapon mounted in a vehicle that subsequently exploded. Iran has blamed Israel and an opposition group in exile called Mujahedeen-e-Khalq for the attack. A senior Iranian security official has described it as “highly complex”, adding that it was carried out with “electronic devices”.

While Mohsen Fakhrizadeh is the most senior nuclear scientist to be killed in mysterious circumstances in Iran, Statista’s Niall McCarthy notes that he is by no means the first with Tehran holding Israel accountable for at least five assassinations.

The first high-profile killing happened in early 2010 when Masoud Ali Mohammadi died after a bomb was detonated on a motorcycle when he left his home. The pattern of targeting nuclear scientists during their commute repeated itself in subsequent incidents and Majid Shahriar died when a motorcyclist attached a bomb to his car in November 2010. It remains unclear whether Darioush Rezaeineja was connected to the nuclear program but he was shot dead regardless by two gunmen on a motorcycle in July 2011. Mostafa Ahmadi Roshan was killed a year later when assailants on a motorcycle attached magnetic bombs to his car while he was on his way to work.

Alongside the assassinations, a chain of mysterious blasts and fires at various facilities associated with the nuclear program have added to the chaos and suspicion. These have been happening for years with reports of major incidents emerging in 2011. That year, an explosion was heard at a nuclear facility in Isfahan and a blast occurred at a steel mill linked to the nuclear program in Yasd, killing seven people. They have become more frequent in 2020 with a major explosion rocking a missile-production complex in Khojir in June, followed by a blast that destroyed a building developing advanced centrifuges at the Natanz nuclear facility in July.

The fact that a presidential transition is imminent in Washington D.C. has added to the tension, particularly as Joe Biden has pledged to resurrect the 2015 nuclear deal. It is unclear whether Tehran will be receptive given recent events, however, and it has already promised to push on with its nuclear program in addition to vowing to retaliate for Fakhrizadeh’s killing. Friday’s incident is also almost certainly going to fan the flames of Iran’s regional conflict with Israel which has been going on for years, particularly in Syria. Israel has carried out airstrikes against Iranian proxies in Syria as well as against Iran’s military directly. The latest killing of a nuclear scientist may lead to a dangerous escalation in that (relatively) covert conflict.