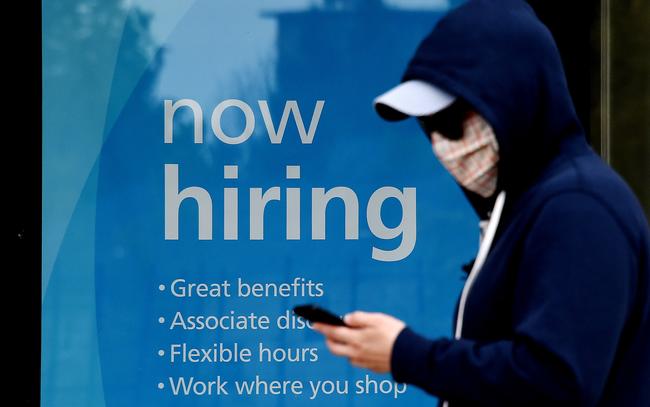 
After several months of blistering job growth, economists expect the rate of US jobs growth to cool sharply in November, with consensus looking for 478k nonfarm payrolls to be added to the economy (well below the 638k seen in October) due to the broad-based resurgence of the coronavirus and related business restrictions which are consistent with a deceleration in job growth; the jobless rate is seen declining by 0.1ppts to 6.8%, although analysts will be paying attention to the U6 gauge of underemployment as well as the participation rate.

The reason for the declining expectations is that, as NewsSquawk writes, labor market gauges have mostly been on the soft side in November; ADP’s gauge of payrolls expectations missed the consensus in November, lowering the bar for the official NFP data; initial jobless claims data ticked up in the BLS survey reference week, while continuing claims did not fall as much as analysts had expected; ISM reports showed that labor market conditions in the manufacturing sector fell back into contraction territory, while the services gauge showed only modest improvement.

On the positive side, there will be strong growth in the construction industry and in trucking, courier, and delivery categories, reflecting favorable weather and the accelerating shift to e-commerce this holiday season. The latter effect should help offset the drag from declining mall traffic in the retail. Additionally, Markit’s gauge of services employment in November was positive, with the data compiler noting that firms were taking on staff at a rate not seen since the survey began in 2009. Another bright spot was the Challenger job cuts data, which fell sequentially, although remains still ugly on a y/y basis; but even then, Challenger warned that hiring plans for the holidays were lower than last year, and the report warns about consumers’
lower disposable income, which could hit spending and pressure the labor market in the months ahead.

The data will be released at 0830 EST; here is what to expect courtesy of NewsSquawk:

ADP: The private payroll data from ADP reported 307k jobs were added to the US labor market in November, missing the consensus +410k, although the prior was revised up 39k to 404k. Although the headline was disappointing in November, with the pace of gains slowing, the report said jobs growth was still positive across all industries and sizes. Analysts have noted that ADP’s gauge of the labor market has undershot the official BLS numbers since the COVID pandemic, although some notes that the margins of the miss have become smaller.

JOBLESS CLAIMS: Initial jobless claims data which coincide with the BLS survey period saw claims tick up to 748k from 711k (the consensus expected a little changed 707k); continuing claims data for the survey period, however, fell to 6.07mln from 6.37mln, a little short of the consensus, which expected a fall to 6.02mln. Pantheon Macroeconomics said that the rise in claims that week was not a one-time fluke, and was more likely the start of an upward trend that would persist until the COVID wave subsides. Much depends on the extent of the inevitable upward kick which will be triggered by Thanksgiving gatherings, but that still means that layoffs could continue to rise through the year-end. The consultancy said the path for the labour market would depend on what extent COVID cases ticked up in wake of the Thanksgiving holidays, where any significant rise could lead to layoffs continuing to rise through the end of the year. Taking a broader view, heading into the October payrolls report, the four week moving average was around 813k, and that fell to 744k in the BLS reference period; that number has continued to edge lower in the weeks that have followed, auguring well for the jobs market ahead – and accordingly, any payrolls upside surprise may therefore be given more credence by traders.

MANUFACTURING SURVEYS: The manufacturing ISM report reported worsening labour market conditions in November, with the employment sub-index falling nearly 5 points to 48.4 points, slipping back into contraction after just one month of printing above 50.0 again; with that said, ISM noted that the employment index was still 20.9 points above the low of 27.5 points seen in April. Nevertheless, the report said that the continued strong new-order levels and expanding backlogs indicated potential employment strength for the remainder of Q4 , and qualitative commentary noted that for the third straight month, and with increased frequency, panellists’ comments indicate that significantly more companies are hiring or attempting to hire than those reducing labour forces.

SERVICES SURVEYS: While most other labour market gauges in the month were erring on the soft side, metrics in the services sector – which accounts for over 70% of US GDP – improved. The ISM services PMI’s employment sub-index saw an uptick in the month, rising 1.4 points to 51.5 to print the third month above 50.0; respondents noted that they were unable to fill vacant positions with qualified applicants, and they were having to overstaff due to high turnover and people being quarantined. And this better showing was also reflected in Markit’s data too, with the data revealing that the recent improvement in demand and the brightening outlook encouraged firms to take on extra staff at a rate not seen since the survey began in 2009, underscoring how increased optimism is fuelling investment and expansion, boding well for the payrolls data.

JOB CUTS: US-based employers announced 64,797 job cuts, the second-lowest monthly total for 2020, according to Challenger’s data (-19.7% m/m, +45.4% y/y); in 2020 ytd, US employers have announced 2.23mln job cuts (+298% vs 2019 ytd), the highest annual total on record. The report noted that fall in disposable income seen in October will have an impact on spending, which will lead to further cuts ahead. ‘Market conditions’ were cited as the main reason for November’s job cuts, followed by ‘demand downturn’, then ‘restructuring’, and only then ‘COVID’ (though COVID still leads all reasons this year, with over 1mln). The report also said that companies announced 185.5k hiring plans in November, bringing the ytd total to 3.11mln; of those just under 800k are related to seasonal hiring plans, which are down y/y when compared to 2019 levels.

ARGUING FOR A WEAKER-THAN-EXPECTED REPORT:

The Third Wave. The resurgence of the coronavirus produced a series of business restrictions and reduced demand for food services. While national job growth remained very strong during the second wave in the summer, it nonetheless weighed on affected states, with SunBelt service rehiring slowing sharply in July and August (see Exhibit 1). Given the increased breadth and severity of the third wave, we expect a more visible impact in the national data. And while the impact is likely to be larger in the December jobs report  (released on January 8th), indoor dining closures in Illinois at the beginning of the month and nearly state-wide measures in California by the middle of the month argue for softness in leisure and other services employment in tomorrow’s report.

Big Data. High-frequency data on the labor market softened on net, averaging just +30k across six measures (median +130k), as shown in Exhibit 2. Of note, only the Dallas Fed population survey is consistent with a larger-than-expected gain—though we note it also correctly flagged the strength in last month’s report.

ADP. Private sector employment in the ADP report rose by 307k in November, below consensus expectations and consistent with slowing job growth.

ARGUING FOR A BETTER-THAN-EXPECTED REPORT:

Construction sector. Favorable weather in early November coupled with the surgen in demand for single-family housing argues for a sizeable gain in the construction category in tomorrow’s report (we assume roughly +100k, mom sa).

Job availability. The Conference Board labor differential—the difference betweenn the percent of respondents saying jobs are plentiful and those saying jobs are hard to get — rose further into expansionary territory (to +7.2 in November from +7.1 inOctober and +3.3 in September).

Jobless claims. Initial jobless claims declined in the November payroll month but atna slower pace than during the summer, averaging 744k per week vs. 826k in October (or -82k mom, vs. three-month-average change of -187k). By week, initial claims rebounded in the first half of November, consistent with possible temporary layoffs due to the virus. While continuing claims fell sharply between the payroll survey weeks (-1.7mn), this decline partly reflects expiring regular-state-programs as opposed to reemployment, and we place less weight than usual on this indicator.Across all programs (including emergency benefits), continuing claims fell by 0.9mn(vs. -2.5mn in October, nsa).

Holiday hiring. Non-seasonally-adjusted retail payrolls have risen by 460k in the last three Novembers (on average), but with mall traffic down sharply due to the virus,we believe retailers are hiring fewer seasonal workers in 2020. While we assume a roughly 100k seasonally adjusted drag from this channel, we expect a partial offset from trucking, warehousing, and delivery categories due to accelerating e-commerce spending. Job growth in those categories averaged +46k jobs over the last three months (includes federal post office), and we expect a stable or faster pace in November.

Employer surveys. Business activity surveys declined on net in November, and the employment components of our survey trackers remained stable in narrowly-expansionary territory (non-manufacturing +0.4pt to 50.5; manufacturing-0.1pt to 54.4).

Job cuts. Announced layoffs reported by Challenger, Gray & Christmas fell by 7% in November after falling by 38% in October (mom, sa by GS). They remain 45% above their November 2019 levels