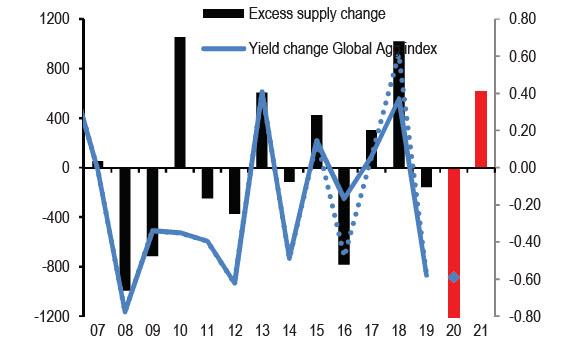 
Two weeks we showed a concerning chart from Bank of America according to which after monetizing virtually all net Treasury issuance in 2020, the Fed’s monetization of debt in 2021 would shrink drastically, and as a result, “Treasury supply will significantly outstrip Fed purchases”, and this is even without factoring in the possibility of another major fiscal stimulus.

This prompted us to ask whether another “crisis” would spontaneously emerge in the coming months to greenlight another massive expansion in the Fed’s QE; and why not – after all we are now well past the point where there is even a trace of monetary prudence with global central banks set to double their balance sheets in just two years :

But let’s (naively) assume there are no major changes to the Fed’s current monetization of $80BN in Treasurys every month. What does that mean for supply and demand for both Treasurys and the broader bond universe, and by extension, equilibrium bond prices?

To answer that question, JPMorgan quant Nick Panigirtzoglou looked at bond supply and demand in 2021 and projected that while there will be a substantial decline in global bond supply next year, he anticipates an even more dramatic drop in bond demand, largely driven by a reduction in G4 central bank purchases.

Starting with supply, in 2021 JPMorgan sees bond supply declining by just over $1 trillion “largely due to a decline in spread product supply where our credit strategists see an effective halving of net issuance in US HG corporate bonds from nearly $1tr in 2020 to around $450bn in 2021. By contrast, government supply looks set to decline only marginally, as a decline in government bond issuance outside the US is largely offset by an increase in US Treasury issuance. This in turn arises from the fact that this year’s funding of the deficit came largely in the form of T-bills in 1H20, with the Treasury gradually increasing bond issuance from May onward.” However, in 2021, JPM expects a $670bn contraction in T-bills outstanding which together with the deficit are set to be absorbed by $2.8tr of bond supply, vs. $2.29tr T-bill supply and $1.75tr of bond supply in 2020.

Meanwhile, on the demand side, “the biggest shift this year has been the central bank QE response.” Among the G4 (US, Euro area, Japan, UK) central banks, bond purchases look set to reach $5.1tr in 2020, driven by the aggressive expansion in Fed QE in late March to provide liquidity coupled with the expansion of ECB purchases in early April. However, for 2021, JPM sees central bank QE impulse declining to around $3.6tr, largely as a continuation of the Fed’s current pace in 2021 will still see a reduction in overall purchases given the aggressive nature of the initial response. And while the largest US bank expects the Fed to provide some further stimulus at the December meeting, it expects this to come in the form of an extension of the average maturity of its Treasury purchases rather than an increase in the pace. As for the ECB, JPM sees a modest increase overall relative to 2020, expecting a €500bn expansion in the PEPP programme in Dec20 and another €250bn expansion in 2H21. Elsewhere, the BoE has already announced a £150bn expansion for 2021, while net buying by the BoJ should be around ¥30tr in JGBs. “Overall, this means we see a deterioration in bond demand from G4 central banks of around $1.5tr in 2021 relative to this year”, according to the Panigirtzoglou.

To be sure, other sources will also be a major supply/demand wildcard as follows:

Of course, less demand can quickly turn into more demand if the price is lower (yield higher), and according to JPM this deterioration in the supply/demand imbalance “implies upward pressure on bond yields next year of just over 20bp based on the relationship between annual changes in excess supply and global agg yields over the past decade, effectively reversing a third of this year’s decline.”

Obviously this begs the question of how much of the above is already priced in; alternatively one can also ask a market which has habituated to Fed intervention how much excess QE (or maturity extension, or yield curve control) is priced into today’s 10Y yield of 0.93%. Because while JPM’s sanguine conclusion that a $600 billion shortfall in demand can be offset with a simple 20bps increase in yields would surely be taken advantage of by the Fed which is certainly eager to steepen the yield curve to give struggling domestic banks some more bang for the NIM buck. And yet we doubt it because the moment the Fed’s unveils new forward guidance indicating that not only is more QE not coming but the current $80BN/monthly is set to shrink, we expect surge in bond yields.

Why? Because that’s precisely what happened in May 2013 when Bernanke unleashed the infamous taper tantrum. That’s when yields soared by 150 bps, sparking a cascade of VaR shocks as the market freaked out. Well, back then it was just QE3 that was being tapered: considering that the size and scope of the current QE is far, far greater, we can only imagine just how dire the “titanic taper tantrum of 2021” will be.