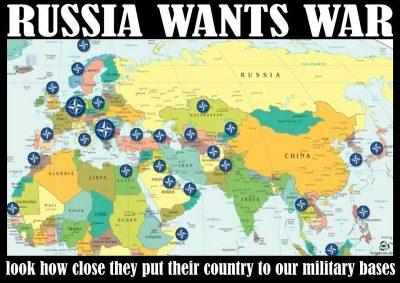 
Authored by Andrew Korybko via GlobalResearch.ca,

Recent attempted infringements of Russia’s airspace and maritime borders by NATO are very dangerous instances of de-facto brinksmanship intended to provoke the Eurasian Great Power into reacting in a way that could then be manipulated as the “plausible pretext” for imposing further pressure upon it.

It seems like almost every week that Russian media reports on NATO’s attempted infringement of Russian airspace and maritime borders, but two ultra-dangerous developments occurred over the past week which signify that this trend will intensify.

These two events deserve to be discussed more in detail because of their significance to NATO’s grand strategy.

The transatlantic alliance intends to provoke the Eurasian Great Power into reacting in a way that could then be manipulated as the “plausible pretext” for imposing further pressure upon it. It amounts to de-facto brinksmanship and is therefore incredibly dangerous since both parties are nuclear powers. Furthermore, it’s the definition of unprovoked aggression since Russia doesn’t partake in symmetrical provocations against NATO. If anything, every time that it’s been dishonestly accused of such was just the country carrying out military exercises within its own borders which just so happen to abut several NATO states after the bloc extended its frontiers eastward following the end of the Old Cold War.

It’s the eastern expansion of NATO and the alliance’s recent activities in the Arctic Ocean that represent the greatest threat to peace between the two. On the eastern front, the US is once again provoking Russia in order to craft the false impression among the Japanese that Moscow is a military threat to their interests. Washington is greatly perturbed by their past couple years of technically fruitless but nevertheless highly symbolic talks over signing a peace treaty to end the Second World War and resolve what Tokyo subjectively regards as the “Northern Territories Dispute”. Moscow’s reclamation of control over the Kuril Islands following that conflict was agreed to by the Allies, but then America went back on its word in order to divide and rule the two.

Their mutual intent to enter into a rapprochement with one another could in theory occur in parallel with a similar rapprochement between Japan and China, which might altogether reduce Tokyo’s need to retain as robust of an American military presence on its islands. That in turn would weaken the US’ military posturing and therefore reduce the viability of its grand strategic designs to “contain” both multipolar countries in that theater. As regards the Arctic and Eastern European fronts, these are also part of the same “containment” policy, albeit aimed most directly against Russia and only tangentially against China’s “Polar Silk Road”.

It’s understandable that the US will continue to compete with these two rival Great Powers, but such competition must be responsibly regulated in order to avoid the unintended scenario of a war by miscalculation. It’s for that reason why the world should be alarmed by American brinksmanship against them, especially the latest developments with respect to Russia that were earlier described. All that it takes is one wrong move for everything to spiral out of control and beyond the point of no return. Regrettably, while Biden might ease some pressure on China, he’ll likely compensate by doubling down against Russia.

Trump should also take responsibility for this as well since it’s occurring during his presidency after all, even if it might possibly be in its final months if he isn’t able to thwart the Democrats’ illegal seizure of power following their large-scale defrauding of this month’s elections. He capitulated to hostile “deep state” pressure early on into this term perhaps out of the mistaken belief that “compromising” with his enemies in the permanent military, intelligence, and diplomatic bureaucracies would result in them easing their pressure upon him on other fronts, but this gamble obviously failed since it only emboldened them to pressure him even more.

It’s unfortunate that Trump was never able to actualize his intended rapprochement with Russia for the aforementioned reasons, but he could have rebelliously defied the “deep state” after this month’s fraudulent elections by reversing his currently aggressive policy against Moscow if he truly had the political will to do so. He doesn’t, though, and this might nowadays be due more to his support of the military-industrial complex than any “deep state” pressure like it initially was. After all, war is a very profitable business, and artificially amplifying the so-called “Russia threat” by provoking Moscow into various responses could pay off handsomely.

It’s therefore extremely unlikely that this dangerous trend will change anytime in the coming future. To the contrary, it’ll likely only intensify and get much worse under a possible Biden Administration. Nevertheless, Russia doesn’t lack the resolve to defend its legitimate interests and will always do what’s needed in this respect, albeit responsibly (so long as it’s realistic to react in such a way) in order to avoid falling into the Americans’ trap. The ones who should be the most worried, then, are the US’ NATO and other “allied” vassals who stand to lose the most by getting caught in any potential crossfire for facilitating American aggression.

Simon Property: Is 6% Dividend Yield Worth the Risk? | Investing.com