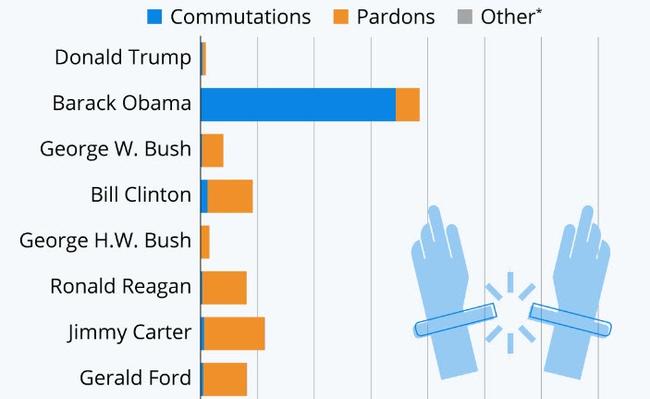 
President Trump has granted a pardon to his former national security advisor Michael Flynn in a rare act of clemency. Flynn pleaded guilty to lying to the FBI about contacts with Russian officials and he was fired after just 23 days on the job.

However, despite the media uproar over Trump’s actions with Flynn, Statista’s Niall McCarthy notes that throughout his time in the White House, Trump has used pardons, commutations and other forms of leniency less frequently than other presidents, particularly his direct predecessor.

As one of the final acts of his eight years in office, President Obama announced that he was commuting the sentences of 330 prisoners, most of whom had been serving time for minor drug offences. Just before his second term ended, the White House announced that Obama had granted more commutations than any president in U.S. history.

In terms of total executive clemency actions, Obama granted the most since Harry S. Truman, according to Department of Justice data published by the Pew Research Center. He primarily focused on commutations, orders that cut somebody’s prison sentence short. These are different to pardons, which are usually granted after a person has served their time, a forgiveness gesture which also restores somebody’s rights (which a commutation does not do).