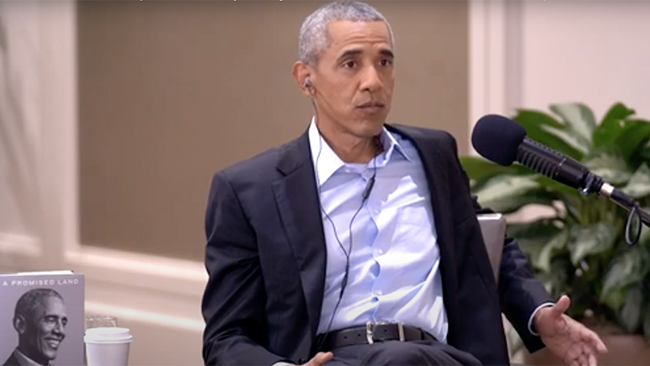 Barack Obama took a shot at President Trump in an interview Wednesday, blaming him for border ‘cages’ that were actually instituted and used under the former President’s administration.

Obama was decrying the level of support that Trump received from hispanic voters during the election campaign.

“But there’s a lot of evangelical Hispanics who, you know, the fact that Trump says racist things about Mexicans,” Obama said during the interview with with The Breakfast Club radio show.

“Or puts detainees, you know, undocumented workers, in cages — they think that’s less important than the fact that, you know, he supports their views on gay marriage or abortion, right?” Obama claimed.

It is more than a tad ironic that Obama begins by talking about how metropolitan elites can be out of touch with the rest of America, and then immediately goes on to pigeon hole Hispanic voters as only caring about abortion.

Are hispanic voters incapable of caring about economic issues or crime? Just because they are brown?

That isn’t the most egregious aspect of his comments, however, given that he completely ignores the fact that for many years the so called ‘cages’ were used by the Department of Homeland Security under the Obama administration.

It was in 2014, two years before Trump was elected, that the ‘cages’ story reached its peak, with overcrowded and squalid conditions at holding facilities making headlines.

While leftists pretty much ignored the story while Obama was in the White House, it suddenly became a major issue when Trump took office.

Indeed, the very same photos from 2014 were recycled and presented as if they were taken during Trump’s tenure.

Democrats mistakenly tweet 2014 pictures from Obama’s term showing children from the Border in steel cages. They thought it was recent pictures in order to make us look bad, but backfires. Dems must agree to Wall and new Border Protection for good of country…Bipartisan Bill!

Democrats and leftist celebrities hammered Trump, using the footage and photos that were taken under Obama and Biden’s regime.

“The photos, taken by The Associated Press, were from 2014, during the Obama administration, but were presented by liberal activists as if they showed the effects of Trump’s immigration policy now.”https://t.co/9x3F7VYUTz

House Democrats are promoting their “civil rights” hearing on “kids in cages” and “inhumane treatment” with a photo from 2014, when Joe Biden was Vice President. So dishonest! pic.twitter.com/Exuj1eudrr

This continued right up until the election.

When the conditions at the border facilities again made headlines in 2018 and 2019, particularly because children were being separated from their families, Trump asked that pressure be put on House Democrats to pass a law to end the practice:

Put pressure on the Democrats to end the horrible law that separates children from there parents once they cross the Border into the U.S. Catch and Release, Lottery and Chain must also go with it and we MUST continue building the WALL! DEMOCRATS ARE PROTECTING MS-13 THUGS.

When Democrats failed to do so, Trump signed an executive order demanding that the practice of separating children be immediately halted:

Democrats then complained that the EO wouldn’t fix the issue, while still doing nothing themselves:

This Executive Order doesn’t fix the crisis. Indefinitely detaining children with their families in camps is inhumane and will not make us safe.

Alexandria Ocasio-Cortez even used the story as a photo-op, fake crying while wearing designer clothing and an expensive watch.

I’ll never forget this, because it was the moment I saw with my own eyes that the America I love was becoming a nation that steals refugee children from their parents,& caged them.

More kids died after this. To date, no one has been held accountable.

We need to save these kids. https://t.co/HhdMqc5zML

It was later revealed that the “cage” AOC was behind concealed nothing but a parking lot.

I try to stay outta politics on twitter and in general honestly. We all have opinions and voices that we want to express, I get it. But that inept Cortez lady was pandering photos of herself crying over immigrants behind chain link fences was a facade. pic.twitter.com/kHPmNV0yms

When news organisations, including Infowars, attempted to highlight this, the photographer who took the images claimed copyright and demanded they be removed from the story.

If Joe Biden takes office in January, expect photos of kids in cages to return. He has repeatedly promised to rapidly send an amnesty deal to the Senate within the first 100 days of his presidency that would give amnesty to 11 million immigrants who currently reside in the US without documentation.

Customs and Border Protection (CBP) Chief Mark Morgan has warned that if President Trump’s enforcement priorities on illegal immigration are abandoned, the US will see a huge “invasion” at the border.

If the current network of tools and policies we have, which ended catch and release, are stopped – we won’t just have another illegal immigration crisis – we’ll have an invasion. pic.twitter.com/oDJneEkd23