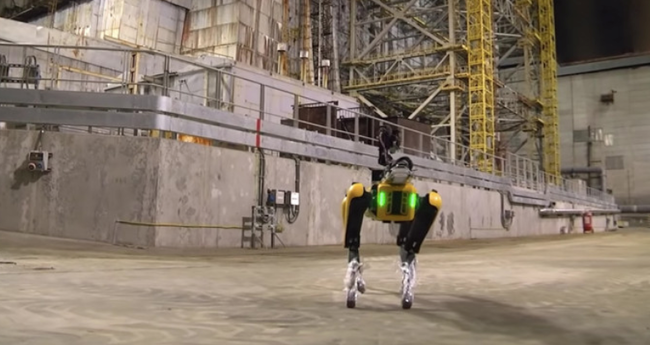 
Spot, the autonomous robot dog, from Boston Dynamics, was equipped with radiation sensors to create a map of the radiation coming out of the Chernobyl nuclear power plant, according to news agency Ukrinform.

Researchers at the University of Bristol and nuclear experts from the State Specialized Enterprise “Central Enterprise for Radioactive Waste Management” recently deployed the four-legged robot to the Chernobyl Nuclear Power Plant Zone that has been abandoned since the catastrophic meltdown in 1986. The site has since been covered up with layers of steel and concrete to keep nuclear material from escaping into the atmosphere.

Weekly measurements around the Chernobyl site are mainly done by humans, which puts them at risk, unlike Spot, a robot who could do so without putting humans in grave danger of radiation poisoning.

Dr. Dave Megson-Smith, a researcher at the University of Bristol, was one of the scientists aiding Spot on its nuclear power plant adventure. Megson-Smith specializes in sensor development and equipped Spot with a collimated radiation sensor.

“We built a map of the radiation coming out of the front wall of Chernobyl power plant as we were in there with it,” Megson-Smith told IEEE Spectrum.

Spot was able to wander around the Chernobyl nuclear site, as well as into the New Safe Confinement structure, which is a steel dome that contains hazardous radioactivity. The robot surveyed radiation levels in the area, creating a 3D map of the distribution.

According to Megson-Smith, there’s a lot of uncertainty on how much radiation Spot is capable of handling. He said Spot is a “system that we can send into places where humans already can go, but where we just don’t want to send humans.”

Engineering a completely radiation-proof robot is challenging – as was seen after the Fukushima Daiichi nuclear disaster in 2011 when robots were sent to die as they surveyed the damaged nuclear power plant.

The future purpose of Spot at Chernobyl could be autonomous radiation mapping to detect radiation leaks.

Not too long ago, a different Spot was assigned to a BP Plc oil rig to “read gauges, look for corrosion, map out the facility, and even sniff out methane.”

While Spot conveniently completes tasks that may endanger humans – the most important takeaway is that robots will displace millions of jobs over this decade.