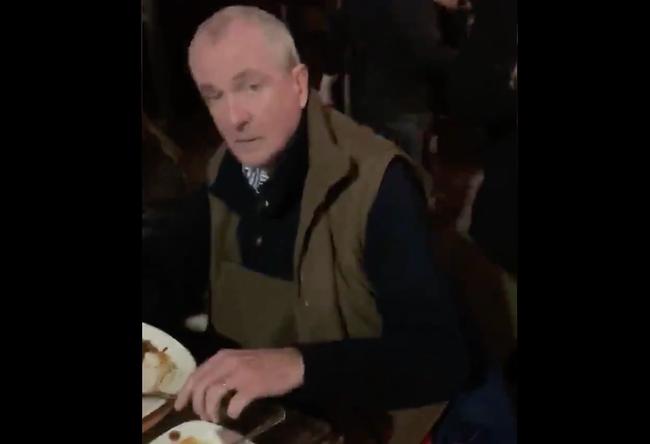 
New Jersey Gov Phil Murphy has become the latest top-ranking Democratic leader to be confronted by angry proles while simply trying to enjoy a meal at a restaurant with his family.

WATCH: New Jersey Governor Phil Murphy is confronted while having dinner with his maskless family. pic.twitter.com/UvQl1t2Uvb

Two women started filming when the stumbled upon Governor Murphy eating dinner at a restaurant with his family.

“Oh my god Murphy you are such a dick” one woman shouted. As the governor looked over, his son spoke up and started taunting the women. That elicited a foul-mouthed tirade from one of the hecklers. “How you doing? How you doing? You having fun with your family in the meantime? You’re having all kind of other bullshit going on at your house?”

Murphy frowned, then smiled, as he calmly continued to eat. No one at the table was wearing a mask at the beginning of the video. New Jersey requires people to wear masks except when it is impractical, like when people are eating.

Murphy’s son responded to the women by saying he liked one of their “Trump” phone cases, pointing to his father and saying, “Guess who Trump likes? He likes my dad.”

As the footage ended, the governor could be seen putting on a face mask.

“The state has experienced significant upticks in the rate of reported new cases across all counties, demonstrating the need for many of the state’s current measures to remain in place, both to reduce additional new infections and to save lives,” Murphy said, according to NJ.com.