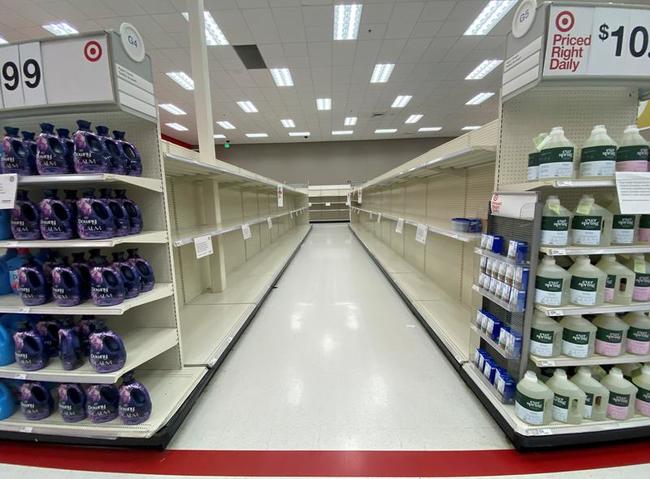 
America is transforming into a nation of preppers as COVID winter sets in. We outlined weeks ago (see: here & here), round two of panic hoarding was well underway if that was for toilet paper, non-perishable food, and or ammunition.

Bloomberg is only now reporting, “households across the US are once again filling grocery carts brimful in the second round of panic buying as the virus surges and states clamp down on economic activity. Defensive purchasing is affecting everything from paper towels to bacon. Even the world’s biggest retailer is reporting shortages of high-demand items, including cleaning supplies, breakfast foods — and the most important commodity in any bathroom.”

Several executives from major corporations are warning about supply chain stress as consumers gobble up high-demand items as the second virus wave spirals out of control.

“It really does have everything to do with what’s happening with Covid cases in any particular community,” Walmart’s chief executive officer, Doug McMillon, said on an earnings call last week.

“We’re going to be able to respond in this instance better than we did in the first half of the year, although we’re still — as a total supply chain — stressed in some places,” McMillon said.

According to Centricity Inc., a firm that tracks online search activity, demand for non-perishable items has skyrocketed 60-70% in the last several weeks.

Jim Dudlicek, a spokesman for the National Grocers Association, said consumers would start to see purchase limits again as the COVID winter has led to another surge in high-demand items at supermarkets nationwide.

“New machinery, or even bringing back to lifelines that we considered in the past as obsolete,” Patricio said, adding that the company is “increasing capacity of products like Philadelphia Cream Cheese or macaroni and cheese.”

Mark Schiller, chief executive officer of Hain Celestial Group Inc., said his company has been ready for the next round of buying panic – during the pandemic, he said his Terra vegetable chips and plant-based Dream milk were hot items among consumers.

“We are far better prepared,” Schiller said. “We have about 50 million more dollars of inventory on hand, of all the things that have the longest supply chain and the least amount of backups.”

Procter & Gamble Co. spokeswoman Jennifer Corso said the maker of Charmin continues “to work around the clock to produce the product as quickly as possible.”

“Paper towel consumption is related to increased cleaning situations, as consumers are cleaning more frequently,” Corso said. “Toilet paper consumption is tied to the increased amount of time consumers are spending at home. For both, people are consuming more and stocking their pantries at a higher level than before the pandemic.”

We also pointed out the toilet paper shortage, and resulting purchase limits at supermarkets have led to the increased search activity of “best bidet.”

Panic hoarding 2.0 comes as searches across the country for “panic attacks” and “night terror” have soared, coinciding with the rise of virus cases across the US.

A nation of panic hoarders is indicative of an uncertain future as cases, hospitalizations, and deaths are climbing into the holiday season as the economy risks a double-dip recession. Somehow the stock market, at all-time highs, misses the fact the nation is still in an economic and health crisis.