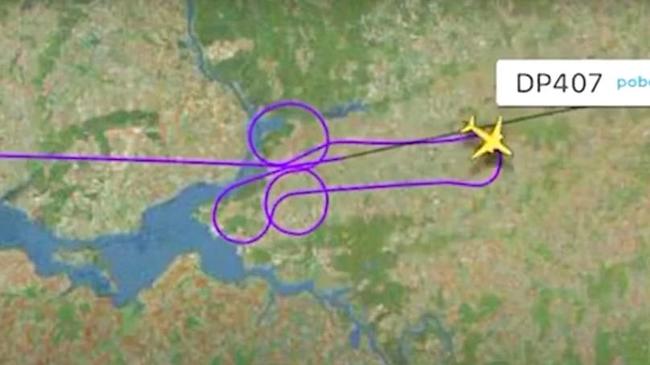 
Two Russian Pobeda Airlines pilots are under investigation after they “chose a ballsy flight path” to show their support for Russian footballer team captain Artem Dzyuba, by drawing a giant c*** and balls in the sky, reported RT News.

Flightradar24 footage shows the Boeing 737-800 taking a quick detour from Moscow to Ekaterinburg on Nov. 11 to create a giant sky penis on flight radar maps.

“We don’t know what you might see in our aircraft’s flightpath, but probably Pobeda captains decided to express their support for Artem Dzyuba, condemning the madness around him,” a Pobeda spokesperson said.

Dzyuba made headlines after a video of him pleasuring himself leaked online. The scandal has resulted in the footballer being suspended for three games.

The Federal Air Transport Agency said it is investigating the incident to determine whether the pilots had clearance to conduct such maneuvers.

While the pilot’s support for Dzyuba is rather strange, readers may recall US military pilots went on a sky penis drawing spree in the last couple of years. We’re not entirely sure why US pilots were drawing the penises (see: here & here & here), but it sure seemed as there was a competition of who could draw the biggest one.