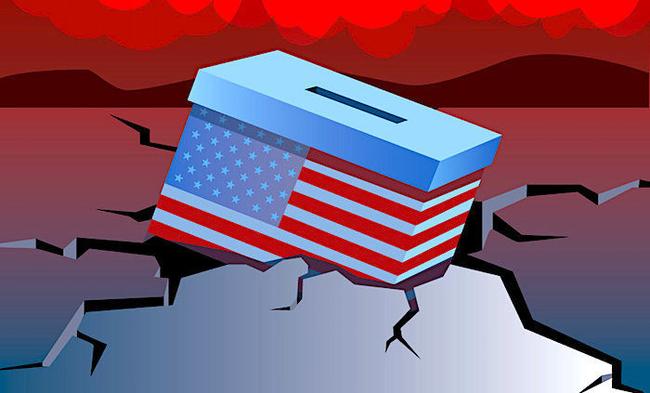 
Authored by Tho Bishop via The Mises Institute,

It is an overplayed cliché to refer to the insanity of the current year. Still, 2020 manages to surprise. It is increasingly looking like 2020 has created the greatest challenge to democratic legitimacy in the past century.

Yesterday was a truly remarkable day in American history.

The official legal team for President Donald Trump—led by Rudy Giuliani, Sidney Powell, and Jenna Ellis—outlined an argument that America’s elections were hijacked by a conspiracy involving Dominion voting systems, the Smartmatic corporation, and elected officials of both parties. The team claimed that these actors collaborated with foreign enemies of the president to ensure he lost the 2020 election, actively inflating the vote totals for Joe Biden. The evidence, they say, will include hundreds of sworn affidavits and other documents that will validate their accusations. They also implied that the Department of Justice is either actively involved in this plot or serving to protect those involved.

The press conference was heavy in bold and striking claims, but so far the legal team has not provided enough documentation to adequately vet the claims made. It is certainly true that questions existed about some of these voting systems prior to the election and that the official results include all sorts of unprecedented voting trends that have sparked questions about their statistical likelihood. Unlikely outcomes are not, however, impossible outcomes, and there are no accusations that any voting machines were illegally used without going through the legally required certification processes.

Any serious legal challenge by Trump’s campaign team will require significant evidence that they have yet to make available. Of course, if the claims are accurate, the case involves a crime that may be beyond the capabilities of America’s judicial system.

What the Trump campaign can legally prove, however, is almost a secondary issue at this point.

Yesterday’s press conference has entrenched the current American president in the position that his anointed successor is illegitimate and that he is the one who holds a democratic mandate to govern.

America has had controversial electoral outcomes before, such as the elections of 2000 and 1876, which ended up being decided by party leaders in a smoke-filled backroom (Republican Rutherford Hayes was given the presidency over Samuel Tilden in exchange for the repeal of Reconstructionist-era laws in the Southern states).

There are several key differences between these instances and the current political turmoil: you now have a populist sitting president, actively despised by the corporate press, who is simultaneously disliked by the establishment of his own party and passionately beloved by his base.

As I noted in an article a few days after the election:

regardless of the legal outcome, America is about to find itself with a president that will be viewed as illegitimate by a large portion of the population—and perhaps even the majority of some states. There is no institution left that has the credibility to push back against the gut feeling of millions of people who have spent the last few months organizing car parades and Trumptillas that their democracy has been hijacked by a political party that despises them.

The response we will receive from the corporate press, Very Serious pundits, and the various talking heads representing all the institutions that Trump has repeatedly mocked and belittled is obvious. Trump’s legal team is being dismissed as a bunch of partisan, sycophantic cranks spinning baseless conspiracy theories. Donald Trump is being portrayed as a spoiled, entitled man-child who would rather take down American democracy than admit he lost. His supporters will be dismissed and mocked as, at best, dumb suckers or, at worst, potentially violent right-wing extremists.

The problem is that, regardless of one’s opinion of Donald Trump or the specific claims made by his legal team, America’s elite and those in power have no credibility of their own.

For almost four years, the corporate press has propped up various false stories about the president while simultaneously propping up his political enemies and actively ignoring stories about the misconduct of Joe Biden’s son and potential conflicts of interest regarding the former vice president. The concerted effort to ask serious questions even forced journalists like Glenn Greenwald to ditch a media company he helped found.

At the same time, progressively-aligned Big Tech companies (many of which are staffed by former members of Kamala Harris’s political offices) have been taking an increasingly aggressive role in censoring and editorializing President Trump and his supporters.

Their claims that they have an ethical obligation to combat “misinformation” in the name of “democracy” are undermined by their willingness to actively assist the Chinese Communist Party in censoring dissidents.

Meanwhile, the professional political class in this country, lauded as “experts” by the bad actors mentioned above, has long mocked the notion of democratic oversight. An explicit example was offered just recently when Jim Jeffrey, a US envoy to Syria, gleefully disclosed to DefenseOne that American military leaders successfully maintained a larger military presence in the country than President Trump had ordered. The power of America’s professional bureaucracy goes beyond military matters, however, and the hope of much of America’s elite is that US policy will be increasingly influenced by their colleagues at the UN and other globalist institutions. Be it the Paris Accord or the Great Reset, many American progressives increasingly view very serious policy matters as issues too important to be entrusted to American voters.

Further still, America’s political environment has become so polarized and hostile that you have many elected officials in positions of influence who openly despise large swaths of the American population. For example, Arizona’s secretary of state—the woman in charge of election integrity in the state—described Trump’s base as “neo-Nazis” in 2017. Given her public statements, why would any Trump supporters have any faith in a governing body she influences to count votes? Meanwhile, the secretary of state in Michigan was a former employee of the Southern Poverty Law Center, a left-wing hate group.

It would, of course, be wrong to suggest that the elites of the American left are alone in their hatred of their political enemies. While the Left has tended to be more violent in recent years, there are many Republican voters who consider the political left immoral, un-American, and a threat to their families. The difference is that, outside of a few levers of federal power held by the Republican Party, the American right does not have nearly the same institutional support that the Left does currently.

It appears that 2020 may be the year that finally proves that the façade of democracy is not enough to maintain a unified political body. The election process does not inevitably lead to compromise and tolerance, but rather ends in those in power and those who are politically vanquished. When the losers of elections do not view their loss as a genuine reflection of democratic will, but rather an illegitimate coup, it is difficult to maintain governance over a population. Joe Biden appointing John Kasich–type Republicans will do little to soothe and reassure those who view a Biden presidency as little different than an occupational force.

Will that end up being the ultimate result of the position of Trump’s legal team? Who knows. Trump and a few lawyers will certainly not be enough to overturn the official results or to successfully spur a Trump secession movement. What will be interesting is how the institution of the Republican Party will respond to the escalating rhetoric of the president.

Under President Obama, the Republican Party remained civil and submissive while its Tea Party base discussed ideas like nullification and a convention of states. The sterility of the traditional GOP is likely a major reason why Donald Trump was able to take over the party. How much of the modern GOP will continue to follow the forty-fifth president, and how many will end up being perfectly content with being partners with Joe Biden?

What we can be sure of is that it will be much harder for Biden to win over many of the 70+ million Americans who voted for Donald Trump earlier this month.