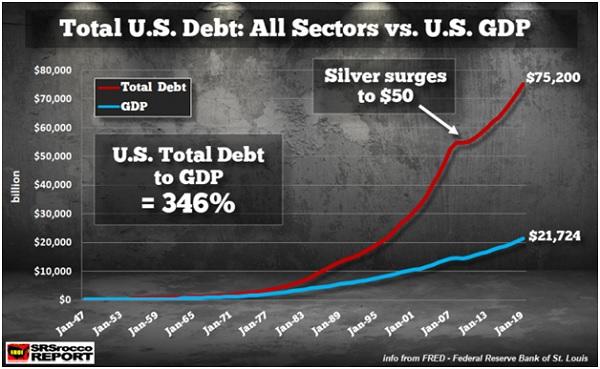 
Authored by John Rubino via DollarCollapse.com,

As Washington borrows and spends to keep the pandemic lockdown from turning into a Greater Depression, federal government debt is approaching the same percentage of GDP as during WW II.

This is a nice journalistic hook, especially because the story – as told by the typical reporter – has a happy ending:

Yes, we borrowed a lot of money to win the war, but then we boomed in the 1950s and paid off the debt, no harm no foul.

So don’t worry, with the right interest rate and trade policies, we’ll manage our current debts just as easily.

Here’s an excerpt from a recent NY Times article observing that even people who normally worry about government debt have concluded that massive deficits are now okay:

A surge in government borrowing in the face of the pandemic recession has put the United States in a position it has not seen since World War II: In order to pay off its national debt this year, the country would need to spend an amount nearly as large as its entire annual economy.

And still, economists and many fiscal hawks are urging lawmakers to borrow even more to fuel the nation’s economic recovery.

“We should think and worry about the deficit an awful lot, and we should proceed to make it larger,” said Maya MacGuineas, the president of the Committee for a Responsible Federal Budget in Washington, which has for years pushed lawmakers to take steps to reduce deficits and debt.

The turnabout on deficit fears caps several years of declining concern over Washington spending more than it takes in, particularly among Republicans. Lawmakers voted along party lines in 2017 to pass a $1.5 trillion tax cut that President Trump and Republican leaders insisted would pay for itself but has instead added to the deficit. The budget deficit surpassed $1 trillion in 2019 — before the coronavirus pandemic hit — a jump of 17 percent from 2018 as tax cuts and spending increases continued to force heavy government borrowing.

The deficit — the difference between what the United States spends and what it earns through taxes and other revenue — is expected to reach $3.3 trillion for fiscal year 2020, the budget office said on Wednesday. That is more than triple the level it reached in the 2019 fiscal year.

In other words, we had already decided that debt didn’t matter before the pandemic hit, which makes it easy to rationalize war-time levels of emergency spending. Hence the many articles noting that we’re now back to WWII government debt levels, and it’s no big deal.

This, alas, is an epic apples-to-oranges delusion. Pre-war, it was hard for individuals and businesses to borrow money (even if they wanted to, which many didn’t), so “the national debt” consisted mostly of outstanding government bonds.

But in the ensuing seven decades, government policy has shifted from borrowing when necessary and then quickly extinguishing that debt, to borrowing continuously while encouraging everyone else to borrow even more. So the correct metric when thinking about our societal obligations is total debt – that is, government debt plus business loans, mortgages, credit cards, car loans, student loans, etc.

The resulting picture is very different:

And even the above chart understates the problem because it excludes the unfunded liabilities of government entitlement programs and pension plans, which dwarf the official total debt. So assuming too much debt is a potential problem – which it is always and everywhere – we can’t use the post-war economy as a rationale for relaxing. Just the opposite.