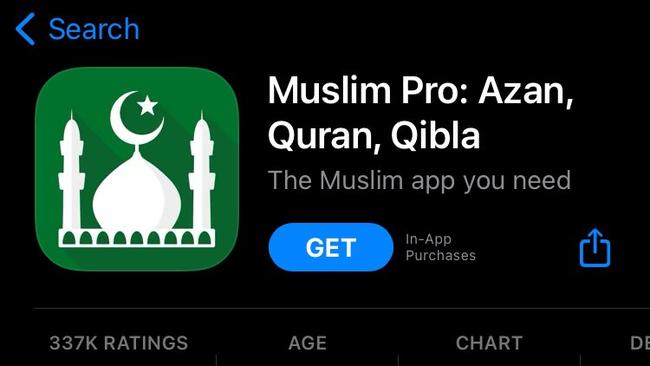 
According to Motherboard, a Muslim prayer smartphone app with tens of millions of downloads has severed ties with a location company that reportedly sold its user data to the US military.

Dubbed the “most popular Muslim app in the world,” Muslim Pro has been downloaded more than 98 million times in 200 countries. The app provides users with Muslim prayer times and shows them the direction of Mecca.

Motherboard released the report Monday that said Muslim Pro sold user location data to a company called X-Mode, which collects location data directly from the app and then sells it to contractors or the military.

Through public records, interviews with developers, and technical analysis, Motherboard uncovered two separate, parallel data streams that the US military uses, or has used, to obtain location data. One relies on a company called Babel Street, which creates a product called Locate X. US Special Operations Command (USSOCOM), a branch of the military tasked with counterterrorism, counterinsurgency, and special reconnaissance, bought access to Locate X to assist on overseas special forces operations. The other stream is through a company called X-Mode, which obtains location data directly from apps, then sells that data to contractors, and by extension, the military.

The news highlights the opaque location data industry and the fact that the US military, which has infamously used other location data to target drone strikes, is purchasing access to sensitive data. Many of the users of apps involved in the data supply chain are Muslim, which is notable considering that the United States has waged a decades-long war on predominantly Muslim terror groups in the Middle East, and has killed hundreds of thousands of civilians during its military operations in Pakistan, Afghanistan, and Iraq. Motherboard does not know of any specific operations in which this type of app-based location data has been used by the US military. -Motherboard

USSOCOM bought access to Locate X, a location data product from a company called Babel Street, according to procurement records uncovered by Motherboard. A former Babel Street employee described to Motherboard how users of the product can draw a shape on a map, see all devices Babel Street has data on in that location, and then follow a specific device around to see where else it has been.

The Locate X data itself is anonymized, but the source said “we could absolutely deanonymize a person.” Babel Street employees would “play with it, to be honest,” the former employee added.

USSOCOM purchased the “additional software licenses” for Locate X and another product focused on text analysis called Babel X in April, according to the public records. The bundle of additional licenses cost around $90,600, the records show.

In a statement, Navy Cmdr. Tim Hawkins, a US Special Operations Command spokesperson, confirmed the Locate X purchase, and added “Our access to the software is used to support Special Operations Forces mission requirements overseas. We strictly adhere to established procedures and policies for protecting the privacy, civil liberties, constitutional and legal rights of American citizens.” -Motherboard

Following the Motherboard story, Muslim Pro released a statement via Twitter on Tuesday, outlining how “media reports” about the app selling user data to the US military is “incorrect and untrue.”

Media reports are circulating that Muslim Pro has been selling personal data of its users to the US Military. This is INCORRECT and UNTRUE. Muslim Pro is committed to protecting and securing our users’ privacy. This is a matter we take very seriously. #MuslimPro pic.twitter.com/2Lu0Zgvso1

According to Middle East Eye, who spoke with Zahariah Jupary, head of community at Muslim Pro, he said Motherboard’s report is “incorrect and untrue.”

“We are immediately terminating our relationships with our data partners – including with X-Mode, which started four weeks ago.

“We will continue to take all necessary measures to ensure that our users practice their faith with peace of mind, which remains Muslim Pro’s sole mission since its creation,” Jupary said.

US Senator Ron Wyden told Motherboard that his office was notified as early as September about X-Mode harvesting phone location data within the US and selling it to military contractors.

“In a September call with my office, lawyers for the data broker X-Mode Social confirmed that the company is selling data collected from phones in the United States to US military customers, via defence contractors. Citing non-disclosure agreements, the company refused to identify the specific defence contractors or the specific government agencies buying the data,” he said in a statement.

Readers may recall we have shared countless incidents of the federal government tracking citizens via their smartphones (see: here & here). Now the government is tracking people through contact tracing apps. Endless tracking – is it time to ditch smartphones?