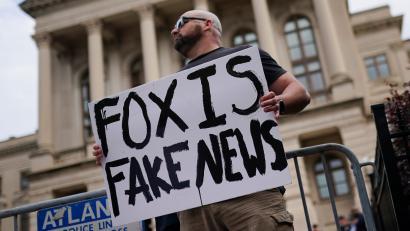 
The CEO of conservative pro-Trump cable channel Newsmax has denied rumors that a Trump-allied private equity firm Hicks Equity Partners has ‘held talks in recent months’ about acquiring them, according to the Wall Street Journal.

“Newsmax never had any deal with the Hicks group, and if it’s true they were using our name for the purposes of capital fundraising, that is wholly inappropriate,” said Newsmax Media CEO Chris Ruddy, who noted that he’s had many discussions over the years with interested parties.

According to the Journal, Hicks. which has ties to a RNC co-chair, has reportedly been exploring ways to build a competitor to Fox News.

Newsmax, meanwhile, has seen a sharp rise in viewership since Election Day, when Fox News’ anti-Trump mask came off – with the network taking heat for a way-too-early call on Arizona for Joe Biden, while several hosts from the ‘conservative’ news outlet were all but rooting for Biden. Fox’s bias was on full display during the first presidential debate, when moderator and Fox host Chris Wallace essentially became a third debater, engaging in frequent arguments with the president.

Mr. Trump and Fox News have had a complicated relationship. The network’s opinion hosts are highly supportive of the president. He devours Fox content, tweets and about it and is influenced by it in policy and personnel decisions, aides say. Yet he spars with the network when he feels it is criticizing or undermining him. –Wall Street Journal

Last week, President Trump retweeted over a dozen posts critical of Fox News, including several which made mention of switching to Newsmax and conservative competitor OANN.

Capitalizing on Fox’s ‘Drudgian’ shift, Newsmax’s average prime-time audience has jumped 156% to 223,000 during election week according to data from Nielsen. Last Thursday, the fledgling network exceeded one million viewers between 7 p.m. and 8 p.m., “about half of Fox’s audience during the time period” according to the report. That said, “Sustaining those gains when interest in the election subsides won’t be easy. Fox averaged nearly six million prime-time viewers during the week of the election, about 22% higher than the previous four weeks.”