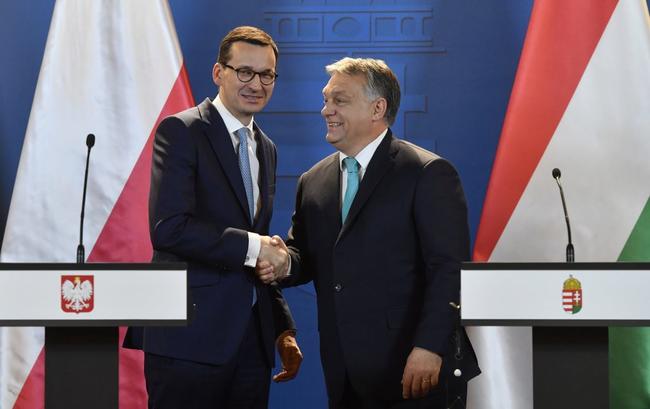 
Poland and Hungary are taking an aggressive stand against what many see as the European Union’s attempt to “force foreign values upon member nations” – this after West European nations have frequently derided Poland under President Andrzej Duda and Hungary under Prime Minister Viktor Orbán as “authoritarian regimes” – something also echoed widely in US and UK media.

Bloomberg reports on Friday that “Poland joined Hungary in threatening to veto the European Union’s 1.8 trillion-euro ($2.1 trillion) budget over the bloc’s efforts to make sure funds only go to countries that adhere to democratic standards.”

In EU technocrat-speak adhering to “democratic standards” tends to mean everything from open EU borders, to state services for all migrants, to redefining marriage, to ceding sovereignty to a bunch of bureaucrats in Brussels, to abortion on demand.

Both countries have been seen as ‘severe violators’ of such principles, given Orbán’s family first policies summed up in the controversial “procreation, not immigration” messaging, or in the case of Poland recently upholding its strict anti-abortion laws.

Already under formal EU probes, both countries have sensed the latest attempts to link budget and stimulus packages to conformity with EU consensus ideology – or what Brussels touts as ‘rule of law’ – is yet another attempt to legally impose external values and directives.

Last week Orban said in a state radio interview that “Hungary can’t be blackmailed.” The Hungarian PM said further: “The rule-of-law debate sounds like it’s about the law but it’s a political debate.”

And now Poland is joining Hungary what increasingly appears their joint brinkmanship pushing back against being dictated to from abroad.

A day after Polish Finance Minister Tadeusz Koscinski said “Officials in Brussels are out of touch with reality,” Bloomberg reports:

At stake is whether the EU can swiftly deliver hundreds of billions in much-needed funds to combat the steepest recession on record, while making sure the money isn’t misappropriated by countries where democratic checks and balances are weak.

A junior party in Morawiecki’s government said on Tuesday that the proposal is an attempt by the EU and its biggest budget contributor Germany to force foreign values upon member nations. Without its support, the government doesn’t have a majority in parliament and would need opposition support to ratify EU plans to issue debt.

Both countries now have effective veto over the budget and stimulus package, given the EU requires unanimous approval among members to borrow from the markets to fund the recovery package.

However, it only needed a majority as it last week imposed the ‘rule of law’ and democracy conditions as part of the negotiations. But that conspicuous stipulation may prove its undoing.