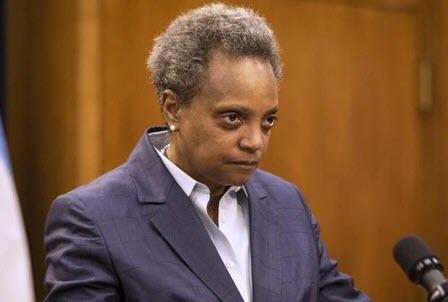 
Chicago mayor and “woke” intellectual giant Lori Lightfoot, who has let her city go to complete hell in a handbasket over the course of the last 6 months, has defended her call for Chicago residents to cancel their “traditional” Thanksgiving plans in a display that the arrogance of liberal politicians knows no bounds.

Her decision comes not even a week after she was seen amidst a large crowd on Chicago streets partying on the heels of a Joe Biden Presidential victory.

This is a great day for our city and our country. We are taking our democracy back. #BidenHarris2020 pic.twitter.com/OAZQPd1r4y

Lightfoot issued a “Stay-at-Home Advisory for Chicago” which goes into effect November 16, 2020 at 6:00AM last week.

She told residents to “stay home unless for essential reasons”, to “stop having guests over – including family members” and to “cancel traditional Thanksgiving plans”.

She was asked about the hypocrisy of shutting down her city days after rallying large crowds by MSNBC’s Steph Ruhle last week.

Ruhle asked: “One of the reasons people feel frustrated or skeptical is they are getting a lot of mixed messages. What do you say to those who are criticizing you were less than a week ago you went out and stood before a massive crowd who was celebrating Joe Biden’s victory and now you’re saying your city has to shut down? How do you have one and not the other?”

Lightfoot defended her decision by saying people were “traumatized” and it was a “time people needed relief” and to “come together”:

“But, yes, there are times when we actually do need to have relief and come together, and I felt like that was one of those times. That crowd was gathered whether I was there or not. But this has been a super hard year on everyone. Everyone feels traumatized.”

So clearly, Lightfoot believes crowded streets offer relief from being “traumatized”, but getting together with family to have a meal and take note of what you’re thankful for – well, that’s just too much.

Perhaps instead of trying to police the lives of her law abiding citizens, Lightfoot might consider policing her city, where, as we pointed out last week, 17 people were shot on Monday alone. We wonder if she has ever considered that maybe the rampant crime spree across her city is why people are truly “traumatized”.

40 other people were shot last weekend, with five of those resulting in fatalities, according to Breitbart. The crime spree has resulted in an exodus from the city.

One 30 year old nurse that lives in River North told the Chicago Tribune last month: “Not to make it all about us; the whole world is suffering. This is a minute factor in all of that, and we totally realize that. We are very lucky to have what we do have. But I do think that I’ve never had to think about my own safety in this way before.”

Resident Neil Spun, who has lived in Chicago for more than 30 years, said: “There have been riots before, and looting. It just seems to me now that the city isn’t doing anything about it. I don’t see this getting any better, and so I’d like to leave.”

And it’s not just in “quality of living” that Chicago is shining under Mayor Lightfoot – it’s also financially. Recall, we noted in late October that Chicago was on the verge of a credit downgrade, according to its Chief Financial Officer Jennie Huang Bennett.