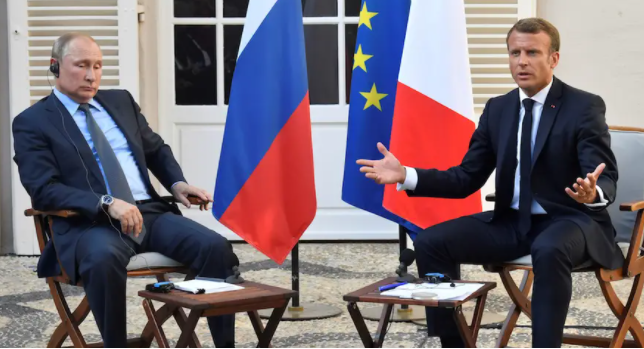 
Not only has Russia been angry and frustrated over the Alexei Navalny fallout where for months Germany, European countries, and the US have accused the Kremlin of a conspiracy to assassinate the Putin critic via poisoning, but now Moscow is going gloves off in returning the favor of the pressure campaign Berlin has been waging.

Before the Aug.20 incident Navalny was a somewhat obscure opposition activist (Russian officials have routinely dismissed him as a mere “blogger), but after being emergency airlifted to a Berlin hospital became a central figure amid Western efforts to push claims of nefarious Putin-sponsored and Russian intelligence hits on “major” opposition voices, akin to the saga of Skripal poisoning.

Russian officials have long been angry at not being able to conduct their own investigation or to access Navalny in Berlin. This week France and Germany rolled out with sanctions on a who’s who of top Russian intelligence and defense officials.

Russia then announced its own “reciprocal” sanctions on German and French officials:

Speaking of Russia’s reciprocal sanctions against France and Germany, the [Kremlin] spokesman stressed that “one couldn’t have expected anything different.”

“The reciprocity principle works here rather clearly, hardly anyone could have expected that Russia would leave this without a reaction,” he explained.

In response to a question which officials from Germany and France banned from entering Russia would correspond to the level of First Deputy Chief of Staff of the Presidential Administration of Russia Sergei Kiriyenko blacklisted by the West, the Kremlin representative noted “One can hardly find Kiriyenko’s equal but in any case, at least nominally, of course, it is easy to find a corresponding title.”

The Kremlin spokesperson called the allegations related to Navalny “more than dubious.”

And now Germany is upset, with a government spokesman on Friday lashing out at the “unjustified” and “inappropriate” Russian action.

The alleged poisoning of Russian activist Alexey Navalny was clearly an “amateurishly staged stunt” designed to justify sanctions against Russia, the country’s foreign ministry has claimed, in an emphatic denial of any official Russian involvement https://t.co/zb7XwHjTnP

Seeking to underscore that the Kremlin itself is at the center of a brazen crime and cover-up Chancellor Angela Merkel’s spokesman Steffen Seibert said from Berlin that “A Russian citizen was attacked with a military nerve agent on Russian soil.”

“Russia has all means at its hands to clear up this crime. Instead, the Russian foreign minister announces sanctions against officials of foreign countries…”

“From the perspective of the German government, such a step is obviously unjustified and inappropriate.”

Meanwhile Russia has maintained its innocence in the Navalny affair. Officials also balked when it was alleged that the deadly Soviet-made novichok nerve agent, which is able to kill in minutes was used – given it would be such an “obvious” operation, easily traced back to Russian intelligence.

Navalny alleged directly that Putin was behind ordering the poisoning, saying he had “no other explanation for what happened.”

Navalny in a major German media interview over a month ago alleged that Putin directly ordered his assassination. “Putin is behind the crime,” Navalny had told Der Spiegel. “I have no other versions of the crime. I am not saying this to flatter myself, but on the basis of facts.”

The Russian government has yet to specify precisely which German and French officials will be targeted, which is at minimum to include a ban on entering the Russian Federation. All of this could put further strain on the nearly completed Russia to Germany gas pipeline Nord Stream 2, which Washington and its allies have been actively trying to thwart.