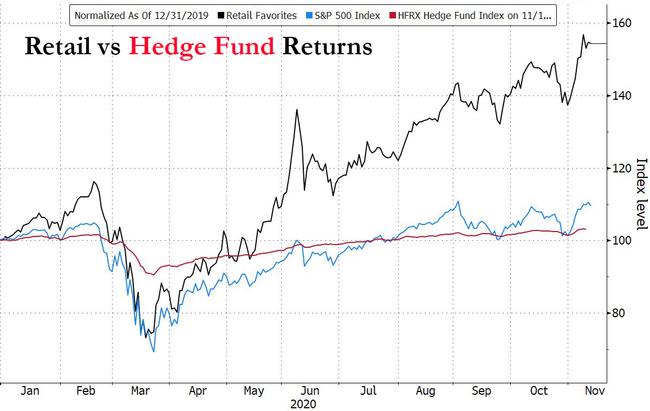 
After a dismal decade for hedge funds, 2020 was the year that may have sealed the fate of the (former) masters of the universe who once upon a time collected 2 and 20 to hedge against crashes and to outperform the market but now merely collect tens of million in fees to come up creative excuses for sucking.

Case in point: at the start of the year, the so-called “smart money” was massively long the same handful of stocks, only to watch mortified as their portfolios exploded in March with hedge funds forgetting to actually “hedge”, and getting swept away with the market carnage. Then just as everyone flipped short in late March, the Fed launched the most batshit insane rescue of capital markets, which included injecting trillions in liquidity every single day and even buying junk bonds. Needless the say, the market ripped just as the hedge fund crew was short, leading to even more losses. Then around September, when hedge funds were doing what they do best – all jumping into the same handful of stocks – the rug was pulled from under them as the Nasdaq tumbled, quickly accumulating even more losses, and then, just two months later, the last nail in the coffin was hammered when momentum stocks – a perennial darling of those who supposedly collect millions to conduct in depth and extensive fundamental analysis but merely copycat each other’s trades – suffered a 15 sigma crash, obliterating what little alpha hedge funds had generated in 2020.

Unfortunately it wasn’t much, because after all that, with the S&P managing to eek out a modest 10% return this year as the Fed threw everything at the market in hopes of propping it up and pushing it higher, the HFR hedge fund index is just barely above 0.

Yet not everyone is sucking this year. The winners? Those who clearly got to benefit from a market that long ago stopped making any sense thanks to the Fed flipping fundamentals on their head, and actively buying risk assets and who knows what else in the open market.

Yes, we are talking about retail investors who are having the time of their life: as shown in the chart below, while the S&P is up 10%, and the average hedge fund is barely in the green, a basket of 50 most popular stocks held by the retail investing community is up a whopping 55% YTD.  This means that retail investors – some as young as 16 years old on Robinhood – are outperforming the best paid investors in the world ten to one!

And while retail investors may be delirious with their market profits this year, for hedge funds – especially those who are struggling to catch up to the S&P500 or worse, to turn green for the year – the drumbeat of death has never beat louder.

Why? Because in a year when volatility averaged well over 20, an amazing environment for professional traders, coupled with record wide dispersion between growth and value returns, hedge funds should be printing making money. Clearly, however, they are not and as Bloomberg reports, what few hedge fund clients remain are losing patience.

“This year separates the adults from the children,” said Tim Ng, chief investment officer of Clearbrook Global Advisors, which invests in hedge funds. “If you are a fundamentally driven, bottoms-up securities manager across any asset class, this should have been the year when you did well. Everything you’ve wanted for years exists.”

To be sure, there are the occasional winners, such as mega macro fund Brevan Howard Asset Management, tech-focused Coatue Management, and Boaz Weinstein’s remarkable Saba Capital. But it is the losers such as Ray Dalio – who these days spends more time spewing trivial bullshit on twitter than investing – whose Bridgewater flagship fund fell 19% through Nov. 5, that are forcing investors to ask: If they couldn’t make money before and still can’t now, why keep them?

“It’s getting harder to have conviction in hedge funds,” said Adam Taback, chief investment officer of Wells Fargo Private Wealth Management, another allocator. “Many have not protected enough on the downside and others haven’t provided enough upside.”

In short instead of hedging, “hedge funds” are doing precisely the opposite: they are losing money when stocks drop and barely making it when stocks surge. Then again, antihedge funds does not have quite that “fast-track to riches” sound to it, so we doubt it will be adopted.

“It’s survival of the fittest -a culling of the herd,” Ng said of the industry that counts more than 8,000 funds, and is about to be hit with a historic volley of redemption requests ahead of the new year.

Neil Datta, who runs the $10 billion multifamily office Forbes Family Trust, asks a question we have been asking since 2010: “Why pay 2-and-20 when they can’t produce returns when markets are volatile?” he said of the industry’s longtime fee standard, roughly 2% for management plus 20% of profits.

To this we would add what we first said in 2011: why pay any money manager when the Fed is now so deeply enmeshed with stocks, and so all-in risk assets, it has no choice but to step and bail out markets any time there is a modest correction.

And it does it for free, which is also why retail investors continue to blow out the “smart money.”

Meanwhile, after complaining for a decade that either volatility or stock dispersion was too low, and that shorting was impossible in a market that only went up, hedge funds got just the environment they desired… and they imploded so spectacularly, when instead of single digit VIX, the “fear gauge” soared to Lehman levels. And a generation of millennial “traders” that had never seen a VIX above 20 was petrified, frozen for weeks, unsure what to do. Well, they won’t have to worry much longer: soon they too will be out of a job.

That said, there is still some optimism for the hedge fund industry ahead, but it’s tempered: and hedge funds really need at least one year of outperforming the S&P unless they collectively throw in the towel on what has been the worst investment choice ever since this website triggered the expert network crackdown back in 2010.

“You should be moving back to a more security-selection-driven and less beta-driven environment,” said Taback, who expects the market tumult to persist. “It’s just hard because we all said the same thing last year and the year before that.”

And while we wait (and wait, and wait) for hedge funds to prove they still need to exist in a centrally-planned, micromanaged world (and collected massive fees), here is the latest HSBC breakdown of the year’s best (yes, there are still some) and worst performing hedge funds.