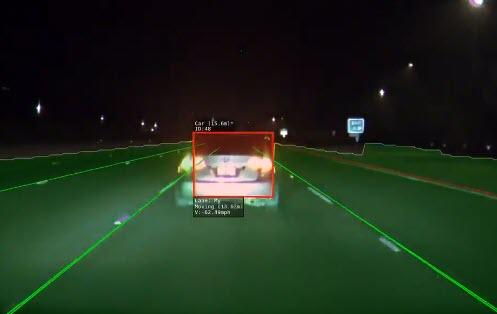 
Though we have seen numerous videos of Teslas crashing on highways, catching fire spontaneously, and driving through storefronts, it’s been rare we’ve been able to see exactly what it looks like through the eyes of Tesla’s autonomous driving software.

This week, auto blog Jalopnik offered up a rare glance into what it looks like from a Tesla’s computer during a high speed Tesla wreck. The video was posted by Twitter user and “hacker/security researcher” @GreenTheOnly, who, due to his research in the area, occasionally gets access to vehicle “black boxes” from salvage yards.

This week he analyzed video and data from a wrecked Tesla that he was sent. Admittedly, the piece states that it doesn’t think Autopilot was active right at the time of the impact, but the video still highlights the “problems of any Level 2 semi-autonomous system”.

The video is from a crash that took place on highway CA-24 during clear weather, at night. A Tesla, traveling at an obviously high rate of speed, rear-ended a Honda that was traveling in front of it. The Tesla was moving fast enough to send the Honda, which was already traveling at highway speeds, flying forward.

@GreenTheOnly was able to extract not only the video from the wreck, but also the visualization from “Tesla’s object-sensing, lane-sensing” technology:

Speed differential at impact 63MPH
This was not on autopilot at impact, but AP disengaged like 40 seconds before due to FCW. There was another FCW 2+ seconds before this impact. pic.twitter.com/nOhh9bzMAI

He said the footage shows the difference in speed between the two cars was 63mph, a massive delta for two vehicles traveling on a highway. Autopilot disengaged “about 40 seconds prior to the impact” after the Tesla issued a Forward Collision Warning (FCW) chime. The same chime occurred “about two seconds” before the impact.

Oh, good. A chime. That seems to have helped.

This series of events led Jalopnik to conclude that Autopilot was on, then it detected a collision 40 seconds before impact, which turned it off. Automatic Emergency Braking likely wasn’t enabled and the driver may have continued to accelerate on his/her own – but that still remains somewhat of a mystery. The Tesla’s speed at the time of collision was 135.55 mph.

The obvious conclusion was that the Tesla was going way too fast for the road it was on and that any driver who was half awake and paying even the slightest bit of attention could have easily prevented the collision.

The less obvious is trying to answer what, exactly, happened. The “multiple FCW chimes seemed to have no effect on the driver, at least in terms of getting the driver’s attention,” Jalopnik notes. Instead they attribute it to the car’s Level 2 autonomous system simply not “working well” with human beings.

“Humans are simply not good at passing off 80-plus percent of a task and then staying alert to monitor what’s going on, which is what Autopilot demands,” the analysis says, before saying they will reach out to Tesla for comment.

We’ll keep an eye out for further explanation of this “mystery” wreck. We’re sure like many other “mystery” wrecks, Tesla will wind up blaming the driver and the NHTSA won’t do a damn thing about it.