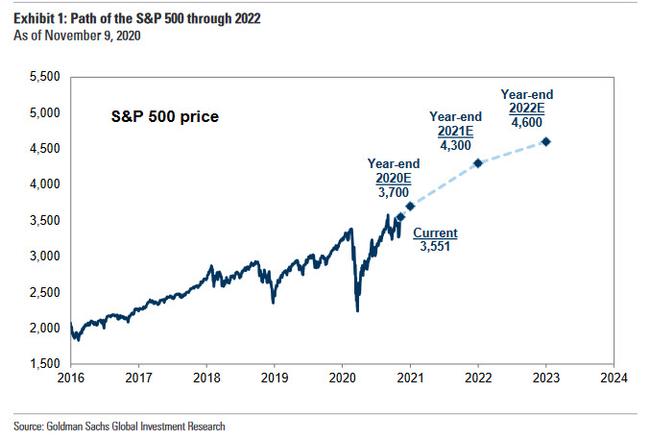 
Two days ago, JPMorgan – which just two weeks ago predicted that “an orderly Trump victory was the most favorable outcome for equities (upside to ~3,900)” while arguing that a Blue Wave is viewed “as short-term neutral but long-term negative, as the expected Biden tax policy outweighs the benefits from a larger than expected stimulus package”, engaged in some pretty blatant revisionism and not only flip-flopped on its view of how Congressional gridlock would impact markets, which it now sees as the most favorable outcome for stocks, but in a note saying that the “Vaccine Rotation, Subsiding Risks” are nothing short of “Market Nirvana”, boosted its September price targets and now sees the S&P reaching 3,600 before year-end, 4,000 by early next year, and “a good potential for the market to move even higher (~4,500) by the end of next year.”

Well, since there is never just one revisionist Wall Street strategist, this morning Goldman Sachs copied JPM’s revised forecast almost verbatim, and in a note from David Kostin which sees 2021 as a redux of the “roaring ’20s” – which as everyone knows ended with the Great Depression and eventually World War II…

The reason? As Kostin, who curiously had already factored in positive vaccine news into his forecasts explains, “a vaccine is a more important development for the economy and markets thanthe prospective policies of a Biden presidency.” In other words, Goldman’s top strategist is double counting positive vaccine news to chase and justify the market’s surge. But hoping that nobody remembers his previous positive take on vaccine news, he says that the results from Pfizer “that its COVID-19 vaccine has an efficacy rate greater than 90% is a positive event that will allow society to gradually normalize during 2021.”

It’s not just covid: as Kostin likes to say, “elections have consequences, both for policies and markets.” And while Goldman sees Biden as the 46th President of the United States, “the upcoming 117th Congress (2021-2023) will likely remain divided but will depend on the results of two run-off Senate elections in Georgia on January 5th. Politics is policy and uncertainty will remain elevated until then. A divided government means little scope for major legislative changes, although trade and regulatory policy stances will likely differ relative to the Trump administration. Unified control would mean more fiscal spending but also higher individual and corporate tax rates.”

Nothing new here; where there is supposedly something new is in Kostin’s latest take on how quickly the vaccine would impact society, and how alleged eradication of the virus will affect the company’s latest 2021 outlook, to wit:

The virus and the vaccine

Despite investor focus on the prospective policy implications of the Biden presidency, the vaccine for COVID-19 is a more important determinant of the path of both the economy and stock market in 2021. The positive preliminary phase 3 trial results from PFE revealed that its COVID-19 vaccine exhibited an efficacy rate greater than 90%, well above what many medical experts had anticipated. However, the timing was consistent with the expectation by Goldman Sachs Biotechnology and Pharmaceutical equity analysts that a vaccine would be identified before year-end. We expect the PFE vaccine, and perhaps other vaccine candidates, will receive emergency use authorization (EUA) by January, and sufficient doses will be available to vaccinate the US population during the first-half of 2021.

In a world where covid is defeated, this clearly would ripple through to corporate earnings, especially at banks where loan loss provisions would tumble. This is what Goldman thinks happens to earnings next:

Bottom-up analyst revision sentiment is now extremely positive and we expect consensus estimates will have additional upward revisions. Our 2021 top-down EPS forecast is 4% above the consensus bottom-up estimate of $168 and 13% above the median consensus top-down estimate of $155.

Goldman is also fully bulled up on the broader economic environment next year, seeing a “continued V-shaped recovery”:

Goldman Sachs Economics US GDP growth forecasts reflect a continued “V-shaped” recovery and are well above-consensus at +5.3% in 2021 (consensus +3.8%) and +3.8% in 2022 (consensus +2.8%), followed by growth of +2.4% in 2023. In part due to this optimistic forecast for an economic rebound from the pandemic-induced recession, our 2021 earnings forecast is also above consensus.

Outside of economic activity, a weakening USD and slack in the labor market should support S&P 500 sales and margins, respectively. The US unemployment rate registered 6.9% in October, well above the estimated natural rate of unemployment (4.4%). Our top-down model demonstrates that a loose labor market is typically positive for earnings growth, as wage growth exerts limited pressure on margin growth. Our FX strategists expect the trade-weighted US Dollar is in a structural downtrend, which typically acts as a tailwind to S&P 500 revenues, particularly for international-facing sectors. Their FX estimates assume the USD weakens by 5% vs. the Yen (to 100) and by 6% vs. the Euro (to 1.25).

To be sure, Goldman had some problems justifying a 1000 point surge in 2 years when looking at already record-stretched valuations, which the bank admits are currently in the 92% percentile…

The S&P 500 index levels we forecast imply a modest P/E multiple expansion next year. The market currently trades at 20.3x our top-down 2021 EPS estimate. Our DDM-derived price target implies that during 2021 the forward P/E multiple will expand by 2x to 22.1x. The implied absolute valuation at year-end 2021 would rank at the 94th percentile vs. history.

However, our year-end 2021 forecast for valuations relative to bond yields would rank in just the 51st percentile vs. history. Accommodative Fed policy and low interest rates make equities appear attractive on a relative basis vs. fixed income alternatives, pushing investors out on the risk curve. With the earnings yield gap of 323 bp above the projected year-end 2021 Treasury, our price target implies a relative valuation roughly in line with the long-term average, less extreme than signals from absolute valuation metrics (see Exhibit 12).

… but here too the company found a “deus-ex” loophole:  record low interest rates which will allow the equity risk premium to compress further:

The backdrop of low interest rates and subdued policy uncertainty that we anticipate during the next two years will be constructive for equity valuations. Our valuation framework relies on the cost of equity, which in turn depends on interest rates and the equity risk premium. The key drivers of our ERP model include breakeven inflation, policy uncertainty, consumer confidence, and change in the size of the Fed’s balance sheet.

Interest rates: We assume stable Fed policy and limited yield curve steepening. Given the Fed’s new average inflation targeting (AIT) framework and its forward guidance for the funds rate, Goldman Sachs Economics forecasts the first hike in the funds rate will not occur until 2025. We assume higher breakeven inflation will drive modest yield curve steepening as the ten-year US Treasury yield climbs from 95 bp today to 1.3% at year-end 2021 and 1.7% by the end of 2022. Diminished prospects of massive fiscal spending that might have occurred under a Democratic sweep coupled with extremely low bond yields globally will limit the rise in nominal US yields.

Equity risk premium: Improving growth expectations and falling uncertainty will compress the ERP. Our economists’ baseline forecast for fiscal stimulus and vaccine approval should drive an improvement in growth expectations, breakeven inflation, and consumer confidence, in turn pushing the ERP lower. The economic policy uncertainty index has averaged 227 during the last year, 100% above the long-term average, and has kept the ERP elevated (Exhibit 9). However, we expect a divided government will reduce uncertainty sharply by year-end 2022 (to 125, in line with the long-term average).

So basically the entire thesis falls apart if yields jump as markets start pricing in rate hikes and runaway inflation. But we digress…

Under these conditions – and really Goldman will immediately flip its view as soon as the S&P tumbles because both JPM and Goldman have demonstrated that it is always and only price that sets the market narrative – Goldman forecast S&P 500 will rise by an additional 11% to reach 4100 by mid-year and end 2021 at 4300 (+5%; for a full-year return of 16% next year) and climb by 7% to reach 4600 by year-end 2022.

To justify this berserk forecast which can only happen in a world where there is no business cycle and where (digital) money literally grows on magic money trees, Goldman writes that “the S&P 500 annual return has been between 10% and 20% roughly 25% of the time since 1982.”

Because, supposedly the logic goes, the current helicopter money, $28 trillion in debt environment is somehow comparable to everything that happened in previous years.