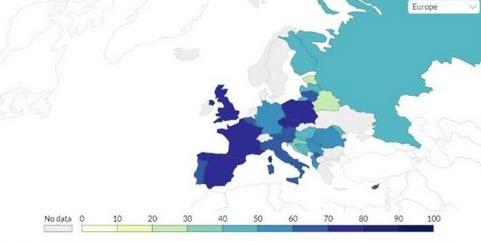 
The broad consensus for the oil market has been that, with a vaccine, oil prices should improve as industry picks up and people start to travel again. But, not so fast…

Additional Covid-19 lockdowns in places like Europe and Asia could once again start to weigh on oil prices, just as crude futures rallied above $40 for the first time since mid-October. In fact, these restrictions have already “slowed down the pace of fuel demand recovery, offsetting a rebound in Asian economies,” according to Reuters.

As the “second wave”, as it’s being called, makes its way around the world, governments are starting to again impose new lockdowns, closing down bars and restaurants. Despite the measures not being as strict as the first round of lockdowns, places like France, the UK, Spain and Poland are still dealing with school and workplace closures, as well as continued travel bans.

Traffic in places like London and Paris has “sharply fell” according to Reuters. Rystad Energy’s head of oil markets, Bjornar Tonhaugen said: “For now, we expect roughly a drop in European oil demand of around one million barrels per day (bpd) month-on-month in November, where approximately 80% of this drop can be attributed to the lockdown impact and the rest to monthly seasonality.”

Keisuke Sadamori, IEA director for energy markets and security, says the lockdowns could put pressure on the outlook for global oil demand, though the effect may not be as bad as the first lockdown.

Monday’s vaccine news won’t have an instant impact, analysts said, but could prevent stricter restrictions in places like the U.S. In the meantime, U.S. traders were keeping a cautious eye on the European lockdowns. John Kilduff, partner at Again Capital in New York, said: “We are just waiting for the other shoe to drop here. This is looking like a replay of earlier in the year.”

Meanwhile, product supplied of gasoline has dropped 9% since August, when the market first saw flashes of bullish sentiment on the news that many students would be going back to school.

Contrasting Europe is Beijing, which has “recovered significantly” compared to its February baseline. Fuel demand in the country has returned to pre-Covid levels and is actually set to grow this year as China’s economy continues to rebound. Beijing based SIA Energy estimates that oil demand will grow 9% in 2020, to 16.4 million barrels per day.

“We anticipate that this recovery path in energy demand growth in India will sustain in the coming months,” oil Minister Dharmendra Pradhan concluded.