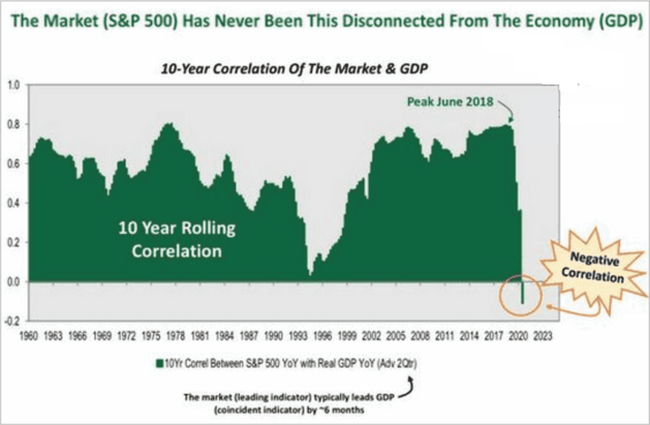 Some of my favorite movies are when a group of investigators tracks down “wrong-doers.” At first, they have only a few clues that are disparate and have little context. However, as the movie progresses, the clues coalesce into a meaningful outcome of catching the villain. In the financial markets, our job as investors is much the same. However, at the peak of bull market cycles, investors begin to ignore evidence at their financial peril.

Let’s take a look at the clues which may be more meaningful than individuals are currently assuming.

Clue 1: Valuations Expensive On Every Level

“Market bubbles have NOTHING to do with valuations or fundamentals.”

I have touched on the impact of valuations and forward returns. Currently, these fundamental concerns remain devoid of attention by investors chasing short-term performance. Despite the March selloff, record numbers of unemployed, and a deep recession, the markets remain near all-time highs.

“We are in a crisis, the worst crisis in my lifetime since the Second World War. I would describe it as a revolutionary moment when the range of possibilities is much greater than in normal times. What is inconceivable in normal times becomes not only possible but actually happens. People are disoriented and scared. They do things that are bad for them and for the world.”- George Soros

As shown in the chart below, the S&P 500 is trading in the upper 90% of its historical valuation levels.

However, it is not just the basic fundamental measures of the market. As noted by the WSJ, valuations are expensive by almost every measure. To wit:

“To illustrate the bearish story told, consider the projected 10-year returns to which these indicators’ current levels translate. The most bearish projection was the S&P 500 would produce a 10-year total return of 3.9 percentage points annualized below inflation. The most bullish was 3.6 points above inflation.

Even the bullish end of that range is more than 3 annualized percentage points below the stock market’s inflation-adjusted return over the past 200 years.”

There are two important points to take away from the data.

The conclusion from the WSJ is the critical “clue” we “investigative investors” should consider:

“Ben Inker, head of the asset-allocation team at GMO, draws an analogy to a leaf in a hurricane: ‘You have no idea where the leaf will be a minute or an hour from now. But eventually gravity will win out, and it will land on the ground.’”

What we know is that stock returns in a decade will most likely be lower than the last. We don’t know if stocks will be lower, none of these indicators tell us the path the market will take along the way.  As the WSJ concludes:

“It might immediately head south from here, or it could enter a blowoff phase of sharply higher prices before succumbing to a severe bear market.”

Clue 2: Detachment Of Market From The Economy

As noted above, the detachment of the current economy from stock market is not sustainable. Such has led to a steady chant by the “bullish” crowd that “the stock market is not the economy.” While such is indeed a true statement, what it obfuscates is that the revenue, and earnings, of the corporations which comprise the market, come from economic activity.

The economy, earnings, and asset prices over time are highly correlated, as shown by the chart below.

Since 1947, earnings per share have grown at 6.21% annually, while the economy expanded by 6.47% annually. That close relationship in growth rates should be logical, particularly given the significant role consumer spending has in the GDP equation.

The correlation between the two is shown in the chart below.

The current “negative correlation” is quite an anomaly given that corporate earnings are derived from economic activity. However, that relationship broke due to the massive amount of Federal Reserve interventions in the financial markets. Currently, the Fed owns the largest amount of the Treasury Bond market in history.

Speaking of earnings. One of the primary themes used by the “Permabulls” is that “valuations are cheap due to low interest rates.” That argument has been the clarion call of a generation of investors who have ignored fundamentals and valuations to chase market returns.

Since 2019, when earnings growth began to deteriorate in earnest, investors bid up shares. As such, the primary driver of returns, as shown below, has come from “multiple expansion.”

The “hope” remains that earnings growth will eventually catch up with valuations. However,  despite being 3/4ths of the way through 2020, the outlook for earnings continues to deteriorate. n just the last 15-days, the estimates for 2021 have declined by almost $7 per share despite a recovering economy’s repeated statements.

There are two problems with the thesis that “low rates justify high valuations.”

However, since stock prices reflect economic growth, the impact of rising rates on the economy is a far more significant issue.

“Actually, one of the dangers is that people could be throwing risk to the wind and this [market] could be a runaway. We sometimes call that a melt-up and produces prices too high and then if there’s a shock, you come down to Earth and that could impact sentiment. I think this market is fully valued and not undervalued, but I don’t think it’s overvalued,” – Jeremy Siegel

Here is an interesting thing.

“Market bubbles have NOTHING to do with valuations or fundamentals.”

In other words, bubbles can exist even at times when valuations and fundamentals might argue otherwise. Let me show you an elementary example of what I mean. The chart below is the long-term valuation of the S&P 500 going back to 1871.

Notice that with the exception of only 1929, 2000, and 2007, every other major market crash occurred with valuations at levels LOWER than they are currently.

Currently, it is believed that asset prices will not be allowed to meaningfully correct due to the “Fed put,” which has provided investors with “insurance” against taking “risk.”

This assumption of “insurance,” which is effectively “moral hazard” created by the Federal Reserve, less to a litany of behavioral consequences for investors.

The biggest of these problems for individuals is the “herding effect” and “loss aversion.”

These two behaviors tend to function together, compounding the issues of investor mistakes over time. As markets are rising, individuals believe that the current price trend will continue to last for an indefinite period. The longer the rising trend lasts the more ingrained the belief becomes until the last of “holdouts” finally “buys in” as the financial markets evolve into a “euphoric state.”

As the markets decline, there is a slow realization that “this decline” is something more than a “buy the dip” opportunity.  As losses mount, the anxiety of loss begins to mount until individuals seek to “avert further loss” by selling.

This is the basis of the “Buy High / Sell Low” syndrome that plagues investors over the long-term.

However, by understanding what drives market returns over the long term, you can understand the impact the market has on psychology and investor behavior.

It is likely that in a world where there is virtually “no fear” of a market correction, an overwhelming sense of “urgency” to be invested, and a continual drone of “bullish chatter;” the markets are poised for the unexpected, unanticipated, and inevitable event.

Caught In “No Man’s Land”

The disconnect between the stock market and real economic growth can certainly continue for now. Exuberance and confidence are at the highest levels on record, but the underlying stories are beginning to weave a tale of an economy that is very late in the current cycle.

Importantly, these are not short-term stories either. The long-term picture for the economy and the markets from the three biggest factors (Debt, Deflation, and Demographics) continues to build. These factors will continue to weigh on economic growth, and market returns, during the next generation as the massive wave of the baby-boomers shift from supporters to dependents of the financial and welfare system.

Let me conclude with this quote from Vitaliy Katsenelson which sums up our investing view:

“Our goal is to win a war, and to do that we may need to lose a few battles in the interim.

Yes, we want to make money, but it is even more important not to lose it. If the market continues to mount even higher, we will likely lag behind. The stocks we own will become fully valued, and we’ll sell them. If our cash balances continue to rise, then they will. We will not sacrifice our standards and thus let our portfolio be a byproduct of forced or irrational decisions.

We are willing to lose a few battles, but those losses will be necessary to win the war. Timing the market is an impossible endeavor. We don’t know anyone who has done it successfully on a consistent and repeated basis. In the short run, stock market movements are completely random – as random as you’re trying to guess the next card at the blackjack table.”

As an investor, it is essential to pay attention to the clues and the evidence’s weight. The success, or failure, of catching the end of the current bull market and the economic cycle will have important implications for your long-term financial goals.