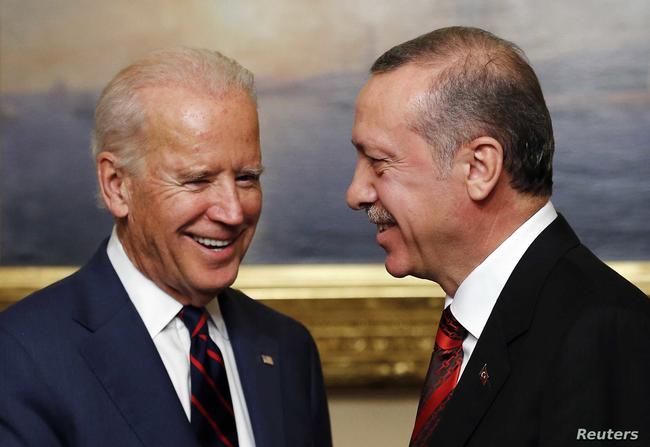 
From nearly the start of the Trump presidency, US relations with Turkey have spiraled downward over everything from Syria policy (given Turkey’s hatred for the Kurds backed by the US), to the prior detention of Pastor Andrew Brunson, to Ankara’s purchase of the Russian S-400 defense system, to Turkey’s being kicked out of the F-35 advanced fighter program.

Yet critics of Recep Tayyip Erdogan would underscore that few world leaders until Trump have actually firmly stood up to the Turkish president, who has also over years made the secular republic more Islamist alongside his AK Parti. But at the same time Trump’s ‘toughness’ is seen by many as but empty bluster regarding Turkey considering the ‘special relationship’ between the two presidents. This as Biden has signaled he’ll pull the trigger on sanctions.

On Friday Foreign Minister Mevlut Cavusoglu weighed in on possible outcomes to the stalled US election outcome, essentially saying that ‘nothing will change’ even with a Trump exit from the White House.

He underscored Turkey stands ready to work with either a Democratic or Republican administration, according to Middle East Eye:

“Of course, individuals have an impact, positive and negative. The sincere friendship between our president and Mr Trump continued through the most difficult times,” Cavusoglu said.

Ankara has lately said that it’s not afraid of sanctions, also as the lira has tanked to new record lows against the dollar consistently over the past weeks. Potential sanctions over the S-400 issue would no doubt hammer it harder.

“No country, including America, has the chance to implement a foreign policy, program or policy in the region in spite of Turkey or by excluding Turkey,” Oktay told a Turkish broadcaster on Friday.

“Turkey is no longer a country which shrinks from, or is scared of, sanctions. Sanctions would increase further our resolve and our determination,” he added.

“Turkey stands to lose more than most other countries if Joe Biden is elected president since he is expected to toughen the U.S. stance against President Tayyip Erdogan’s foreign military interventions and closer cooperation with Russia.”

Almost a year ago nearer the start of the Biden campaign, the Democratic nominee called out “autocrat” Erdogan and expressed frustration over his deepening ties with Russia’s Putin.

Meanwhile, last month Turkey’s military tested its newly acquired S-400 defense missiles from Russia – a program which Washington has long threatened sanctions over. Erdogan hasn’t backed down or altered course amid threats, even after the US offered sales of US Patriot missiles as an alternative.