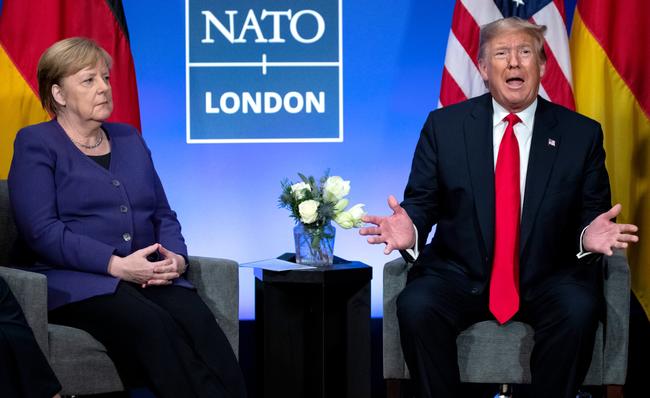 
The “grab your popcorn” reactions of a number of foreign countries to the election vote count mess that America finds itself in have been varied and interesting. The leading European country that’s perhaps been most directly vocal against Trump thus far has been Germany.

On Friday German Foreign Minister Heiko Maas went after President Trump’s repeat allegations of voter fraud and of the Democrats trying to “steal the election” especially centered in the remaining handful of battleground states. Maas accused Trump of irresponsibly “pouring oil on the fire” and creating a downward spiraling situation, potentially leading to what top Merkel allies have suggested will lead to a “Constitutional crisis”.

“Anyone who continues to pour oil on the fire in a situation like this is acting irresponsibly,” Maas said in an interview with Germany’s Funke media group.

His very direct words came as Biden appears to be pulling away in crucial states like Pennsylvania, which is expected to likely decide the election – though just barely in this continued nail-biter which has been rife with irregularities, evidenced by the unprecedented length it’s dragging on for. Maas suggested Trump is attempting to craft a mere “one man show” at a moment the president is saying he’ll “never give up fighting”.

“Now is the time to keep a cool head until an independently determined result is available,” Maas said in the German media interview. He added that “decent losers are more important for the functioning of a democracy than radiant winners.”

But of course, Maas has no way of knowing the real state of the election, and certainly not its winner at this stage. He called for all sides to show “restraint” and wait for the declared winner.

Indirectly referencing Germany’s rocky and tense relationship with Trump, which has been recently tested on everything from NATO defense spending to the Russian Nord Stream 2 gas pipeline to Germany, he urged whatever the outcome that the “West plays as a team again.”

The new statements out of Germany come a day after top allies of Chancellor Angela Merkel slammed Trump’s behavior as “awful”. Germany’s defense minister Annegret Kramp-Karrenbauer warned Thursday it could “lead to a constitutional crisis” in the US.

And another top Merkel had this to say:

Norbert Röttgen, chair of the German parliament’s foreign affairs committee, told CNN that Trump’s behaviour “really is unbelievable and it’s really with great sadness to many, many Germans to witness this behavior.”

He said: “I also have to say it is without any surprise. I have always said, and I was not the only man in Germany (to say it), that if and when we are going to see a tight election result, we are going to see a fight with all means by the president and it will start with a claiming of victory before votes have been counted.”

“This is the start of trying to occupy the public realm and to dominate the public opinion and he will then intervene in the process of counting, he will challenge this then by the courts, and we are are going to see days and weeks of fighting and non-acceptance.”