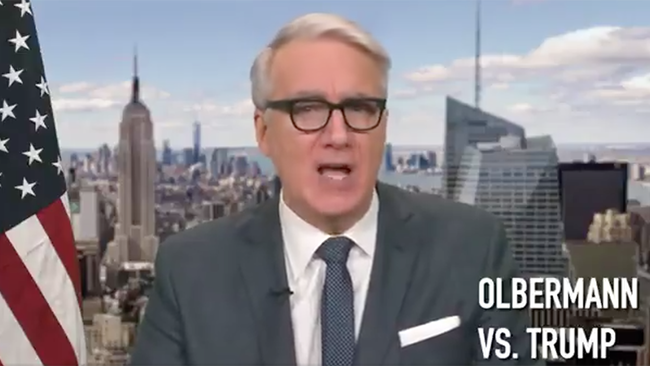 In a venom filled online rant, Keith Olbermann called for President Trump to be dragged out of the White House immediately in handcuffs.

“TRUMP HAS LOST HIS MIND AND MUST BE REMOVED, TONIGHT,” Olbermann tweeted, along with the video of him ranting on his online program literally titled Olbermann vs Trump.

“The coup attempt, we can survive. A mentally incompetent president, we may not. Instead, he will stay, and when he concedes he will simultaneously begin a campaign for 2024.” Olbermann stated.

Here is the full 10 minute mental breakdown, for those who can stomach it:

President Trump vowed last night to take the matter of election theft to the highest court in the land, noting “We think there’ll be a lot of litigation, because we cannot have an election stolen like this.”

Once a respected newsreader who espoused nuanced positions including opposition to illegal invasions in the Middle East, Olbermann is now completely unhinged, engaging in endless ‘orange man bad’ rants.

Last month Olbermann said Trump should be executed over the handling of the coronavirus:

Keith Olbermann calls for Trump to get the death penalty, one for every COVID death. Unhinged. pic.twitter.com/8JbY0pPu7p