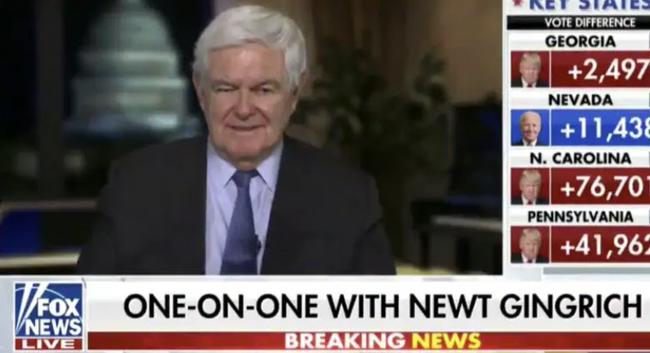 
Authored by Sara Carter via SaraACarter.com,

Former speaker of the House Newt Gingrich tells Fox News host Sean Hannity Thursday (Nov.5,2020) that the presidential election has been mired in corruption and must be investigated.

Former speaker of the House Newt Gingrich, a long time top political analyst and best selling author, told Fox News host Sean Hannity Thursday that the presidential election has been mired in corruption and must be investigated if America is to survive.

Gingrich is right and his warning should be headed. He referenced his decades long career since 1958, saying “I’m the angriest I have been in that entire six decades.”

He reiterated that a “group of corrupt people who have absolute contempt for the American people who believe we are so spineless, so cowardly, so unwilling to stand up for ourselves that they can steal the presidency.”

The corrupt bureaucrats that targeted President Donald Trump since the start of his presidency believe we – the American people – will do nothing but “wring our hands,” he said.

I’m grateful I’m not the only one feeling this way. This is not about being a soar loser this is about election corruption and suppression of the will of the American people. We’ve been watching this same routine of targeting President Trump since he was elected in 2016 and our nation’s foundation is eroding. Soon there won’t be the America of our fore-fathers but something far different than we could have ever imagined. A nation cannot survive this type of systemic corruption.

I am sick and tired of corrupt left-wing democrats who believe that we are too timid and too easy to intimidate, and therefore let us just go out and steal it. That’s exactly — no one should have any doubt.

You are watching an effort to steal the presidency of the United States. And this is not about Donald Trump. This is about the American people. the American people have the right in an honest election with honest legitimate ballots to pick their leader or are we now just sheep to be dominated by these high-tech businesses, the news media, and the various political machines? And are we are supposed to surrender? I think this is one of the great, this is a crisis in the American system comparable to Washington on Christmas Eve or comparable to Lincoln and Gettysburg. This is a genuine deep crisis of our survival.

“Do the American people have the right in an honest election w/honest legitimate ballots to pick their leader? Or are we now just sheep to be dominated by the high tech businesses, the news media, and the various political machines and are we supposed to surrender?”