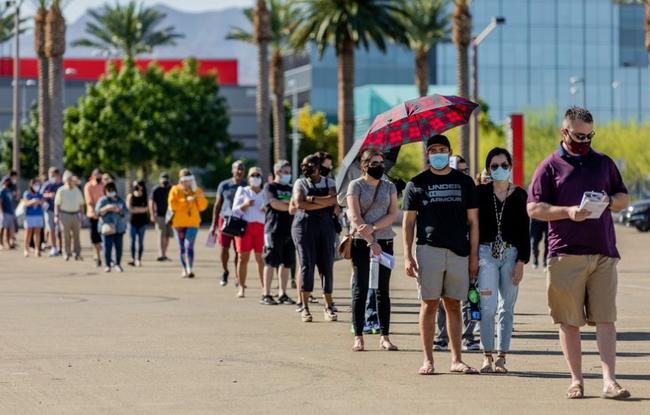 
Update (1145ET): Wisconsin has officially been called for Joe Biden.

Wisconsin Elections Commission Administrator says on @NBCNews: “All of the ballots have been counted.” Joe Biden has won Wisconsin by 20,697 votes.

Meanwhile, Arizona, which Fox News called for Biden last night, might be back in play.

Now that the ‘Blue Wave’ has been thwarted, and Democrats look to return in the next Congress with an even weaker hand in the House, (not to mention smaller-than-expected gains in the Senate), both team Biden and the Trump Campaign are claiming victory, as Americans wait for the final vote tallies from a handful of swing states that could once again decide the election.

Biden has reportedly managed to ‘flip’ Arizona, and while Wisconsin and Michigan are currently leaning Democratic, North Carolina, Georgia and PA (perhaps the most important state of them all) are still leaning red.

As both sides lawyer up, here’s the current state of play in the US, along with a rundown of when Americans and the rest of the world can expect the final results, depending on a number of scenarios.

Pennsylvania was long expected to be under scrutiny in a close race, with both campaigns aggressively courting voters in the final days before the election.

Trump led Biden by about 657,000 votes as of 9 a.m., but there were at least 1.4 million uncounted mail-in and absentee ballots that will determine the outcome, according to the Department of State.

The department reported almost 1.1 million mail ballots were counted statewide, with 77% for Biden and 22% for Trump. By contrast, there were 3.9 million votes cast on Election Day, with 66% for Trump and 33% for Biden.

Pennsylvania has tallied 44% of mail-in ballots across the commonwealth, according to a department dashboard. The outstanding ballots are expected to favor Biden because Democrats dominated the requests. Of the 2.55 million ballots reported returned as of Tuesday, registered Democrats accounted for 65% and Republicans 24%, data show.

In Philadelphia, the commonwealth’s most populous county where 76% of registered voters are Democrats, 141,523 of an expected 350,000 to 400,000 mail-in ballots have been reported counted as the processing and counting continues. Allegheny County, the second most-populous, is reporting about half of its almost 350,000 mail-in ballots counted, according to the dashboard. Bottom Line: Philadelphia is expected to report additional mail-in votes on Wednesday morning. State officials say a final result should be ready “within days.”

Biden had a small lead in Wisconsin, which has 10 electoral votes, after several metropolitan areas submitted their absentee ballot counts early Wednesday morning, overturning the lead that Trump had maintained since the polls closed at 8 p.m. By late in the morning, the Biden campaign was calling it for Joe after state officials said all votes had been counted.

Although Biden was ahead by almost 21,000 votes as of 8:40 a.m. local time, no major network had yet called the state. With the two candidates within a percentage point of each other, the loser when the final precinct’s numbers are in has the right to request a recount. Meanwhile, the state’s election commission said that clerks will be randomly selecting 5% of reporting units for voting-equipment audits. The process for official certification of results doesn’t start until Nov. 10.

Bottom Line: Biden is penciling in a win, but the state is still in play as of late Wednesday morning.

Michigan — a state Trump narrowly won in 2016 — expects to complete most of its ballot counting by the end of the day, Secretary of State Jocelyn Benson told CNN Wednesday morning.

Ballots from Detroit, Flint, Grand Rapids, Warren and Sterling Heights were still being recorded. The state likely won’t have final results until later in the day because Detroit is the largest precinct and had a record turnout this year, with a large swath of absentee ballots that take longer to count than in-person votes.

Benson, who has scheduled an update on the counting process later Wednesday morning, did say that other Michigan counties will be reporting in the coming hours, which could give election watchers an idea of where the state is headed. Biden started pulling ahead Wednesday morning as more absentee ballots were tabulated.

Benson said that 3.3 million absentee ballots have been received and are being tabulated and another 2 million to 2.5 million voted at the polls Tuesday.

“We’ll know much more in the hours to come and we’ll have a much more complete picture of Michigan later today,” she said.

All but one of Georgia’s counties had completely reported vote totals as of Wednesday morning. But in Fulton County, which includes most of the Democratic stronghold of Atlanta, only about 77% of the estimated vote has been counted.

Fulton, the largest county in Georgia, suffered a setback earlier Tuesday in counting mail-in ballots, after a water leak forced officials to stop tallying and tens of thousands of ballots were left uncounted.

Bottom Line: Georgia expects all votes to be counted by the end of the day.

North Carolina’s race was tight on Wednesday morning, with Trump leading by about 77,000 votes.

About 62% of the state’s voters cast ballots before Election Day. More registered Democrats voted early than Republicans, but one-third of the electorate is unaffiliated with either major party.

The state Board of Elections said that 100% of precincts have reported Election Day votes, but that the state still had to count about 25% of the total ballots cast, or roughly 1.9 million votes.

Democrats took some solace in Governor Roy Cooper winning re-election, but it’s not clear if that’s a signal Biden can flip the traditionally Republican state.

Bottom Line: The state has as long as nine days to count mail-in ballots sent before Election Day.

A final count in Nevada isn’t expected for several days as it awaits ballots mailed as late as Election Day to arrive, though it isn’t clear how many people waited that long to vote. With about 82% of votes counted, Biden was holding a lead of less than one percentage point.

“Clerks have until Nov. 10 to receive mail ballots and until Nov. 12 to count them,” said Jennifer Russell, a spokeswoman for Nevada’s secretary of state. Bottom Line: The state began posting partial results late Tuesday, with Biden holding a slim lead over Trump. That count, which included early and Election Day voting, will continue to trickle in on Tuesday.