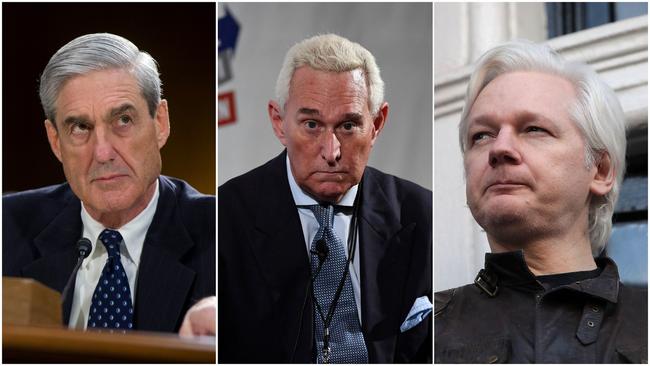 
Much belatedly and amazingly a mere hours before election day Buzzfeed News published a bombshell report late Monday night based on the DOJ newly declassifying previously secret portions of the Mueller report (following a successful FOIA lawsuit to obtain them). It’s yet more smoking gun evidence proving long after the fact that core aspects of now deflated ‘Russiagate’ that American media spent years devoting wall-to-wall coverage to were deliberate manufactured falsehoods (shocker!), specifically as regards claims of early collaboration and “collusion” between Trump staffers, WikiLeaks, and the Russian government.

Unfortunately, like with the latest news that put the final nail in the coffin of the Steele dossier hoax, this too will fast be memory-holed given it’s now election day. We learn 18-months after the initial report’s redacted release that despite putting one of the most hyped central allegations facing Trump’s team and his past campaign adviser Roger Stone under a microscope, Mueller’s team of hundreds of FBI agents simply “did not have sufficient evidence” and thus never pursued charges, as the Buzzfeed report begins:

Prosecutors investigated Julian Assange, WikiLeaks, and Roger Stone for the hacking of Democratic National Committee servers as well as for possible campaign finance violations, but ultimately chose not to charge them, newly released portions of the Mueller Report reveal.

Although WikiLeaks published emails stolen from the DNC in July and October 2016 and Stone — a close associate to Donald Trump — appeared to know in advance the materials were coming, investigators “did not have sufficient evidence” to prove active participation in the hacks or knowledge that the electronic thefts were continuing. In addition, federal prosecutors could not establish that the hacked emails amounted to campaign contributions benefitting Trump’s election chances and furthermore felt their publication might have been protected by the First Amendment, making a successful prosecution tenuous.

Recall that throughout years it was an unquestioned article of faith communicated to the American public over the airwaves of MSNBC, CNN, CBS, and others that WikiLeaks essentially ran cover for Russia in a grand DNC email hack conspiracy designed to influence the 2016 presidential election while embarrassing Hillary. We were “assured” that this played a crucial role in Trump’s victory over Clinton.

The widespread unfounded allegations also served to permanently taint WikiLeaks as some kind of Moscow influence op, which also no doubt added pressure to UK attempts to apprehend Julian Assange from the Ecuadorian Embassy in London, which ended up happening.

The relevant newly unredacted section details that investigators “considered whether to charge WikiLeaks, Assange, or Stone as conspirators in the computer-intrusion conspiracy,” given WikiLeaks’ “role in disseminating the hacked materials, and the existence of some evidence that Stone played a role in coordinating” the publication of Clinton adviser John Podesta’s emails:

“While the Office cannot exclude the possibility of coordination between Stone and WikiLeaks or that additional evidence could come to light on that issue, the investigation did not obtain admissible evidence likely to meet the government’s burden to prove facts establishing such coordination beyond a reasonable doubt,” the newly released portion said.

Amazing. Hours before Election Day comes news that Mueller aggressively tried to prosecute Assange and Roger Stone for a conspiracy related to the 2016 DNC/Podesta emails, but ran into “factual…hurdles” which could not establish any conspiracy. Perfect time to memory-hole this pic.twitter.com/Q9Szys4MmL

“While the investigation developed evidence that the GRU’s hacking efforts in fact were continuing at least at the time of the July 2016 WikiLeaks dissemination,” a newly unredacted section of the report reads, prosecutors “did not develop sufficient admissible evidence that WikiLeaks knew of — or even was willfully blind to — that fact.”

For comparison of how the same page looked before Monday:

Phrases that are deeply inconvenient to longtime Russiagate peddlers appear in the newly released sections, such as “factual…hurdles” and “proof..lacking”. Speaking of these legal hurdles the report said bluntly:

Regardless, success [of criminal charges] would also depend upon evidence of WikiLeaks’s and Stone’s knowledge of ongoing or contemplated future computer intrusions – the proof that is currently lacking.

Likewise, prosecutors faced what they called factual hurdles in pursuing Stone for the hack. The report notes they lacked proof “beyond a reasonable doubt that Stone knew or believed that the computer intrusions were ongoing at the time he ostensibly encouraged or coordinated the publication of the Podesta emails.”

Wow a Russiagate conspiracy theory “did not have sufficient evidence”, for some reason that’s not a shocker https://t.co/12un24dN2R

Mueller wrote that the Justice Department “did not have admissible evidence,” for conspiracy convictions to stick. This definitive confirmation comes a whopping 18-months after the original redacted report’s release.

The DOJ tried to argue it could “compromise ongoing investigations” or possibly reveal sensitive law enforcement tactics or procedures in keeping the new information classified.

Or perhaps given they understood it would inevitably be released one day, why not release when it’s too late for the information to make a major impact? That is… now that the election is already upon us and with Americans having voted or made up their minds. But as a reminder, this is precisely how propaganda is supposed to work after all.