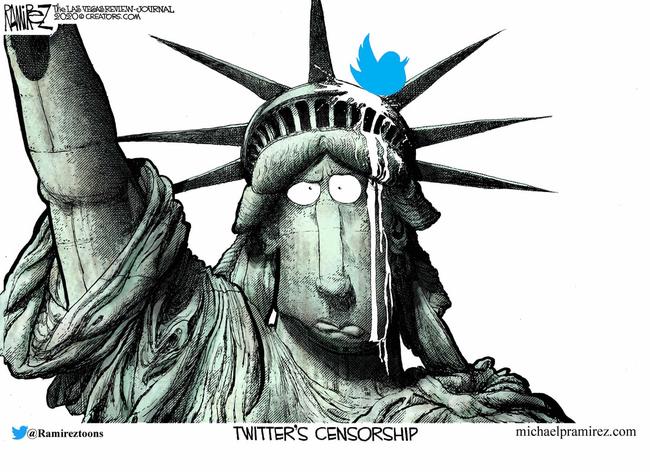 Below is my column in The Hill on Twitter’s adoption of a “living Internet” approach to censorship policies. Notably, at the recent hearing before the Senate, Democratic Senators demanded more censorship despite the Big Tech CEOs admitting that the blocking of the Hunter Biden story was a mistake.

Twitter and Facebook responded within days with new attacks on free speech in barring conservative viewpoints from a Republican women’s group and one of the highest Trump Administration officials.

Here is the column:

Twitter finally lifted its suspension of the New York Post over its reporting on the laptop of Hunter Biden. The decision came two weeks after both Twitter and Facebook barred access to the story about his emails that appeared to reveal influence peddling and contradicted past statements of former Vice President Joe Biden. Twitter now admits there was no evidence that the emails were fabricated or were the product of Russian disinformation, a conclusion confirmed by both the Federal Bureau of Investigation and the director of national intelligence.

Rather than apologize for its error, however, the company cited a curiously familiar argument to excuse its decision: Its policies are “living documents” subject to continual change. That sounds like an internet version of the “living Constitution” theory used by jurists such as the late Justice Ruth Bader Ginsburg to continually update the meaning of the Constitution. Twitter’s claim should turn every citizen into a strict “internet originalist.” Before addressing the “Living Twitter” theory, a few established facts on the story should be noted.

There is no evidence that the laptop or emails are false. Indeed, the only obvious “disinformation” about this story has come from Joe Biden and his allies. House Intelligence Committee Chairman Adam Schiff, for example, stated that the entire story was Russian disinformation, a claim repeated by Biden this week. In reality, Twitter and Facebook tried to bury a story by the New York Post that appears to be accurate regarding the source and the content of the emails.

After dropping its suggestion of Russian disinformation, Twitter claimed the underlying material appeared to be hacked material — a claim ridiculous on its face, since the Post’s article was based on the contents of an abandoned laptop. Now the social media company is adopting a claim that its policies should be read like a living Constitution:

“Our policies are living documents. We’re willing to update and adjust them when we encounter new scenarios or receive important feedback from the public.”

It is precisely the type of argument that would drive the late Justice Antonin Scalia to distraction. Scalia rejected this approach to constitutional interpretation as little more than opportunism to change the meaning of rights without having to ask the consent of citizens through amendments:

“You would have to be an idiot to believe that; the Constitution is not a living organism; it is a legal document. It says something and doesn’t say other things … .”

That is a view shared by newly sworn Justice Amy Coney Barrett, who recently testified that

“I interpret the Constitution as a law. That I interpret its text as text. I understand it to have the meaning that it had at the time people ratified it. So that meaning doesn’t change over time, and it isn’t up to me to update or infuse my own policy views into it.”

I am not a constitutional originalist, but I am an internet originalist. The internet was originally the greatest single advancement in free speech since the printing press. It was an open, free platform for speech that united the world. Not surprising, it also was a threat to authoritarian countries and figures who have struggled to control and censor the sharing of information and viewpoints. Originally, Twitter was the ultimate expression of those free speech values, as individuals associated with others to share instant observations and experiences.

Yet, the original free use of the internet has come into increasing conflict with liberal politicians who demand that social media companies actively prevent people from sharing information they deem to be false or misleading. Joe Biden has demanded that these companies block postings linking mail voting to fraud; Democratic leaders like House Speaker Nancy Pelosi have threatened punitive legislation if the companies do not censor groups accused of spreading false information.

In this week’s Senate hearing on Twitter’s suppression of the Biden story, Democratic senators ignored the admissions of Big Tech CEOs that they were wrong to bar the story and, instead, insisted that the CEOs pledge to substantially increase such censorship. Senator Jacky Rosen warned the CEOS that “you are not doing enough” to prevent “disinformation, conspiracy theories and hate speech on your platforms.”

That is why a “living internet” interpretation is so dangerous. These companies are driven by profits and politics, not principle. If Democrats take control of Congress and the White House, these companies will face growing demands for increased censorship. That is when “living policies” change “to update and adjust them when we encounter new scenarios or receive important feedback.”

The alternative is “internet originalism” – no censorship. If social media companies returned to their original roles, there would be no slippery slope of political bias or opportunism; they would assume the same status as telephone companies. We do not need companies to protect us from harmful or “misleading” thoughts. The solution to bad speech is more speech, not approved speech.

If Pelosi demanded that Verizon or Sprint interrupt calls to stop people saying false or misleading things, the public would be outraged. Twitter serves the same communicative function between consenting parties; it simply allows thousands of people to participate in such digital exchanges. Those people do not sign up to exchange thoughts only to have Dorsey or some other internet overlord monitor their conversations and “protect” them from errant or harmful thoughts.

It has been a long time since a bunch of geniuses came up with a new form of communication on Twitter. Back then, the platform was neutral. Its appeal was its convenience, not its supervision. Dorsey himself said the success of Twitter is based on the principle that you “make every detail perfect and limit the number of details to the perfect.”

A free and open forum for communication was the original and perfect design. And here, once again, the Constitution could offer the clarity of that original meaning to limit the detail to the perfect. To paraphrase the First Amendment, Twitter should return to a simple static, “originalist” position: It should “make no policy abridging the freedom of speech or the press.”